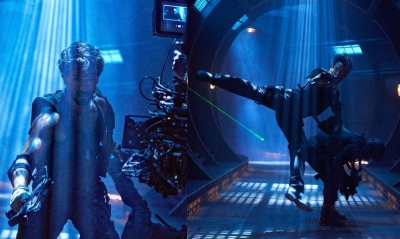 In the pictures, Tiger can be seen doing what he does best – high octane action sequences and acrobatics. Dressed in a sleeveless jacket, Tiger effortlessly fits his part of an action hero.

Produced by Vashu Bhagnani, Jackky Bhagnani and Deepshikha Deshmukh under the banner of Pooja Entertainment, ‘Bade Miyan Chote Miyan’ has been directed by Ali Abbas Zafar, who has earlier helmed films like ‘Tiger Zinda Hai’ and ‘Sultan’.

Mumbai– Kartik Aaryan and Kriti Sanon-starrer film ‘Shehzada’ wrapped up its shooting on Tuesday. The film also stars Ronit Roy and Manisha Koirala, both of whom took to social media to share the update with their followers. 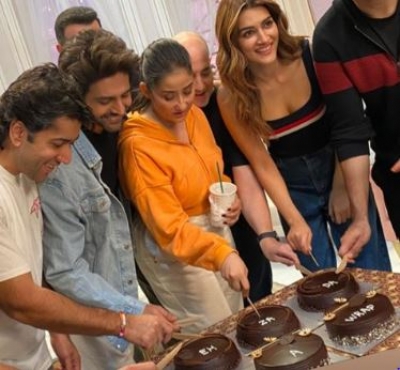 Manisha took to the story section of her Instagram and uploaded pictures and a video from the film’s wrap up party. In the video. Kartik and Kriti can be seen along with the film’s director, Rohit Dhawan.

Ronit also shared one of the pictures posted by Manisha in his story and expressed his gratitude as he wrote on the picture: “(It) was so lovely co-starring in this movie with you @m_Koirala. Hope to do it again soon. Thanks much for all the warm vibes.”

Kriti also shared the story on her Instagram. ‘Shehzada’, which is directed by Bollywood star Varun Dhawan’s sibling Rohit Dhawan, is Kriti’s second film with Kartik. Prior to this, the two were seen in the 2019 film ‘Luka Chuppi’.

Earlier, Kartik took to Instagram, where he shared a picture of himself dipping his feet in ice cold water. He was also seen holding a large chunk of ice as he posed. 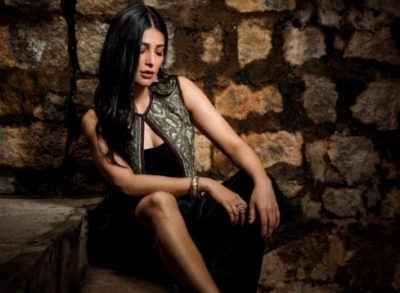 She could not, however, be a part of the ‘Waltair Veerayya’ pre-release launch. According to unit sources, Shruti could not make it to the event due to ill-health brought on by fatigue and exertion.

Shruti had a hectic 2022 and spent most of last year shooting for her various projects across industries.

According to sources close to her, Shruti hasn’t been 100 per cent fit since the Greece schedule of her International film ‘The Eye’, as it was a physically gruelling shoot and she was practically living out of a suitcase for more than four months because of back-to-back shoots.

Despite this, she ensured that she was back on sets to complete the shoot for her January releases so as to not hamper their release in any way.

Tollywood’s ‘Mega Star’ Chiranjeevi, who’s opposite Shruti in ‘Waltair Veerayya’, praised her for her professionalism as she completed the film’s shooting as per schedule despite being under the weather.

Fans of the actress were worried about her health after she put out a status on her social media accounts ruing the fact that she could not be part of the ‘Waltair Veeraaya’ event, but she assured them that with adequate rest and medication she will be back soon. 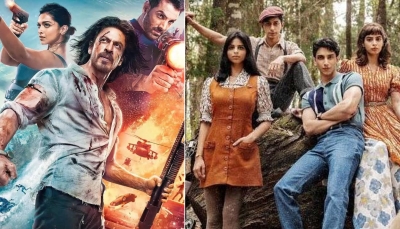 A media statement from IMDb says that among the Indian movies with planned releases in India in 2023, these 20 were consistently the most popular with IMDb users, as determined by the actual page views of the more than 200 million monthly visitors to the website worldwide throughout 2022.

Points to note about the IMDb list of most anticipated Indian movies of 2023:

* Hindi films dominate the list with 11 titles, followed by five Tamil, three Telugu and one Kannada.

* After a hiatus of four years, Bollywood will see the comeback of its superstar Shah Rukh Khan in the lead role with three big releases – ‘Pathaan’, ‘Jawan’, and ‘Dunki’ (No. 10 on list). SRK’s daughter Suhana Khan is also making her debut in 2023 with the Zoya Akhtar movie ‘The Archies’, which has made it to No. 9 on the list.

* ‘Indian 2’, at No. 16, is the sequel to the 1996 blockbuster ‘Indian’ (Hindustani), which will see Kamal Haasan reuniting with director Shankar.

* ‘Shehzada’ (No. 18), starring Kartik Aaryan, is yet another much anticipated 2023 release. It is a remake of Allu Arjun’s Telugu superhit ‘Ala Vaikunthapurramuloo’. ‘Bholaa’ (No. 20), starring Ajay Devgn, is a remake of the 2019 Tamil movie ‘Kaithi’.

Yami would love to play her ‘favourite actress’ Madhubala in biopic 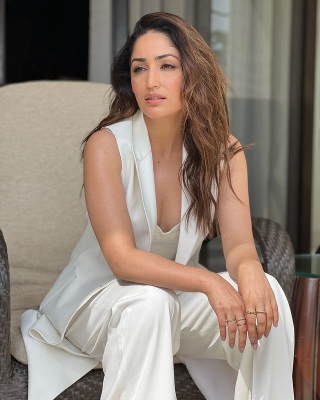 When asked whose biopic she would like to do, Yami said: “The most beautiful one would be Madhubala ji. I know that there are some films being announced, but it’s nothing to do with those announcements.”

She added: “I have always said this in my makeup room, because I used to watch her songs at night. So at night, I have this habit till date, of watching either some old songs or some old interviews.”

“It could be Madhubala ji’s to Smita ji’s interviews, and my God! How well-spoken they were. I wish again, one of those actors were still alive. There was so much more that was left to be seen and I wish she was here today, because she’s one of my most favourite actors.”

Meanwhile, on the work front, Yami has more power-packed performances lined up with projects like ‘Chor Nikal Ke Bhaga’, ‘OMG2’ and ‘Dhoom Dham’ among other unannounced projects. (IANS)