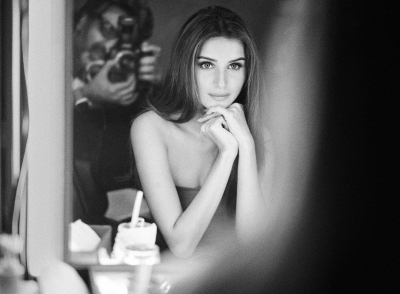 Mumbai– Actress Tara Sutaria looks stunning in a new black and white picture she has shared on social media.

Tara posted the picture on Instagram. In the image, she is seen posing in front of a mirror.

“Back to the 90’s Back to black and white for our routine #PostPackUpShot,” she wrote as caption.

Tara will soon be seen in the Bollywood remake of the Telugu hit “Rx100”, which is also going to mark the debut of Suniel Shetty’s son Ahaan Shetty. Besides this, she has been roped in for “Ek Villain” and “Heropanti 2”.

Namit Das goes clean-shaven for his next

Lucknow– Namit Das sports a clean-shaven look in an upcoming project, which is currently on the floors. This is unusual for the 36-year-old actor who has mostly appeared on the screen wearing a beard or moustache. Namit calls this his “launda look”!

“I think in most of the projects, I’ve sported a moustache or a beard or both. After a long time, I’ve gone for the clean-shaven look. I love this look and it’s kind of growing on me. I like to call it my launda look and I can’t wait to reveal why,” the actor said.

“I am glad that through this project I have the opportunity to try different things. This is a very special venture and I am excited for when I can start talking about it,” he added.

The actor is currently shooting for the project in Lucknow. Although details about the project and Namit’s role are under wraps, his character is pivotal to the story.

Namit is also gearing up for the release of his upcoming film Aafat-E-Ishq. Directed by Indrajit Nattoji, the dark dramedy is set in a small town in heartland India. The film also features Neha Sharma, Amit Sial, Deepak Dobriyal and Ila Arun.

Kirti Kulhari: Playing a cop in ‘The Girl On The Train’ was special

Mumbai– Despite mixed response that “The Girl On The Train” garnered, actress Kirti Kulhari, who plays a pivotal role, is happy with the audience response to her role. She essays Inspector Dalbir Kaur Bagga, a turbaned cop in London tracking a murder, and her character comes with an important twist in the end.

“It feels great to be appreciated for this role. Getting the chance to play a cop was in itself very special. This movie offered me the opportunity to collaborate with (director) Ribhu Dasgupta, (co-actors) Parineeti Chopra and Aditi Rao Hydari. It was a creatively satisfying experience. After this movie, I feel like I am being encouraged to try different things as an actor,” she tells IANS.

The film, which has Parineeti in the lead, is based on author Paula Hawkins’s 2015 novel of the same name.

Kirti made her Bollywood debut in 2010 with “Khichdi: The Movie” and later went on to work in projects such as “Pink”, “Indu Sarkar”, “Mission Mangal”, and “Uri: The Surgical Strike”.

Mumbai– Actress Evelyn Sharma posted a behind-the-scenes picture of herself on Instagram. The photo is from the set of her upcoming film “X Ray: The Inner Image”.

In the picture, Evelyn, who seems to be deep in thought, looks radiant in a red mesh top. “Behind the scenes shenanigans and some posing!!! #Jigliya #Xray #BTS,” she wrote.

The cast of the psychological thriller has Rahul Sharma and Yaashi Kapoor, and is directed by Rajiv S. Ruia.

Meanwhile, Evelyn has been spending time with her Australia-based fiance Dr. Tushaan Bhindi in Sydney, and has been treating her fans to pictures of the two on social media. The couple adopted a puppy a while back.

Evelyn made her foray into Bollywood with the film “From Sydney With Love” in 2012. She has been part of films such as “Nautanki Saala”, “Yeh Jawaani Hai Deewani” and “Yaariyan”. She was also seen in Prabhas-starrer “Saaho”, which hit the screens in 2019.

Mumbai– Bollywood actress Alia Bhatt on Thursday shared a couple of stills from the set of her upcoming film Brahmastra where she features alongside her rumoured boyfriend Ranbir Kapoor.

In the Instagram images, Alia poses in front of a huge idol of Goddess Kali along with Ranbir and the film’s director Ayan Mukerji.

“It’s a blessing to be on this journey.. & these magical boys just make everything. P.S — this is jussssttt the beginning,” Alia captioned the photos on Instagram.

Brahmastra also stars Bollywood icon Amitabh Bachchan and Telugu superstar Nagarjuna Akkineni along with Mouni Roy. The film is billed as the first installment of a fantasy adventure trilogy.

Nagarjuna recently announced on Twitter that he has finished shooting for the film. “And it’s a wrap for me on #Brahmastra . Such an amazing experience it has been with our stellar performers #Ranbir and @Aliaa08. Can’t wait for you guys to witness the outstanding world #AyanMukerji has created.#TheBigIndianMovie #Brahmastra,” he wrote. (IANS)