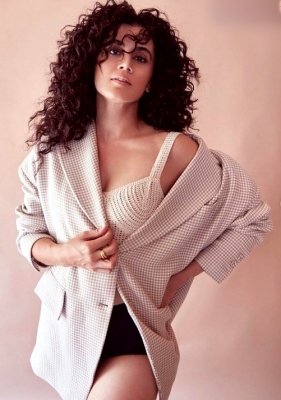 Filmmaker Anand L. Rai took to Twitter to announce that the shooting has commenced and also asked Taapsee as to why she hasn’t shared the poster yet.

‘Haseen Dillruba’ is a 2021 romantic thriller film directed by Vinil Mathew and written by Kanika Dhillon.

Mumbai– Bollywood actress Vidya Balan recently shared a reel on Instagram in which she can be seen enacting Angoori Bhabhi’s dialogue from the show ‘Bhabhiji Ghar Par Hain’. 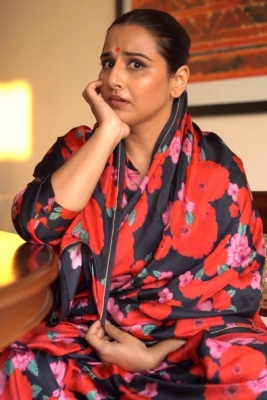 Vidya captioned it: ‘Angrezi ek sensuous bhaasha”. Shubhangi expressed her excitement over it and also wished to get a chance to work with Vidya.

Angoori, played by Shubhangi Atre, in the show, shared: “I saw this reel as soon as I woke up. I was very happy and excited. Sometimes, there are some reels on such trending audios which we both have made and I feel that we have similar choices when it comes to this.”

“I was waiting to see what she will make now. But today I heard my own voice in her reels and I was super excited. She has done such great work and I hope to work with her some day. I want to thank her and I loved it, ‘aap sahi pakde hai’.”

Producer Binaiferr Kohli also added that getting positive response and attention for the content you are creating always gives a special feeling and the way Vidya shared a reel is like an honour for her.

“When I noticed Vidya Balan’s reel on ‘Bhabiji’, I felt good. It’s an honour when one gets appreciation for the good content we are making. The reach of the show is phenomenal. I am grateful to audiences for the love and yes, I am thankful to my most loved Vidya for making such a reel,” she added.

Mumbai– Music composer AR Rahman, who was the first Indian to win a Golden Globe in Best Score category for the 2009 film ‘Slumdog Millionaire’, congratulated the team of ‘RRR’ for bringing home the 80th Golden Globe award for the song ‘Naatu Naatu’.

Rahman took to Instagram, where he shared a clip of Jenna Ortega announcing ‘Naatu Naatu’ as the winner in the Best Original Song in Motion Picture category.

He tweeted: “Incredible ..Paradigm shift Congrats Keeravani Garu from all Indians and your fans! Congrats @ssrajamouli Garu and the whole RRR team!”

‘Naatu Naatu’ was in competition with ‘Carolina’ from ‘Where the Crawdads Sing’, ‘Ciao Papa’ from Guillermo del Toro’s ‘Pinocchio’, ‘Hold My Hand’ from ‘Top Gun: Maverick’ and ‘Lift Me Up’ from ‘Black Panther: Wakanda Forever’.

To receive the honour was music composer M.M. Keeravani, who was accompanied with his wife Srivalli.

He dedicated the award to Rajamouli and the actors Ram Charan and NTR Jr.

While accepting the award, he said: “Thank you very much for this prestigious award: This award belongs to SS Rajamouli for his vision, I thank him for constantly believed and supporting my work. Nt Rama Rao and Ram Charan who danced with full stamina.”

It centres around two real-life Indian revolutionaries, Alluri Sitarama Raju and Komaram Bheem, their fictional friendship and their fight against the British Raj.

Set in the 1920s, the plot explores the undocumented period in their lives when both the revolutionaries chose to go into obscurity before they began the fight for their country.

SRK to Rajamouli: Woke up, started dancing to ‘Naatu Naatu’ celebrating your win

Shah Rukh took to Twitter, where he replied to filmmaker S.S. Rajamouli appreciation tweet for the trailer of his upcoming film ‘Pathaan’.

‘RRR’, which has become an international phenomenon with a collection of over Rs 1,200 crore (approximately) worldwide, stars Ram Charan and Jr NTR in the lead roles.

‘RRR’ centres around two real-life Indian revolutionaries, Alluri Sitarama Raju and Komaram Bheem, their fictional friendship and their fight against the British Raj.

Set in the 1920s, the plot explores the undocumented period in their lives when both the revolutionaries chose to go into obscurity before they began the fight for their country. (IANS)