Taapsee Pannu: Back to business

Mumbai– Taapsee Pannu is back being her quirky self she promotes her upcoming film “Haseen Dillruba”. On Friday, she took to social media to share a picture posing with a rose stem in her mouth, setting the tone that things are back to business for her.

“Back to business ! Let’s do this ! #HaseenDilruba 2nd July 2021 on @netflix_in #PromotionReady #Rose #DineshPandit #ipadpro2021 #ipadpro,” she wrote alongside the image.

In the image, the actress, who has returned from a vacation in Russia, is dressed in a red top and she sits with an iPad, a thick book and a flower vase with red roses.

Shruti Haasan switches from sweatpants to saree for Insta post

Mumbai– Actress Shruti Haasan posted a picture of herself in a saree on Instagram on Friday, and the compliments poured in. 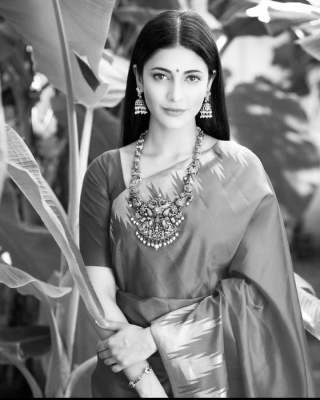 “Hi there!!! Been ages since I wore anything traditional!! It’s been the sweatpants look for days and days and days. So, here’s a Friday flashback for you,” Shruti wrote with her picture post.

The post received over two lakh likes within three hours of upload.

The actress, who is currently in Mumbai, informed fans recently about finally getting out of her house after three months with all required precautions.

On the work front, Shruti will be seen in Telugu film “Salaar” alongside Prabhas and Tamil film “Laabam” with Vijay Sethupati.

Shilpa Shetty: We all need a little bit of fire to keep us going

Mumbai– Bollywood actress Shilpa Shetty Kundra has shared some Friday wisdom on social media along with a stunning video featuring her in a bright yellow ensemble.

Shilpa posted a boomerang video on Instagram that shows her twirling in a layered yellow floor-sweeping dress. She paired it with an emerald neck piece.

“We all need a little bit of fire to keep us going,” she wrote as the caption.

Meanwhile, the actress’ family recovered from Covid 19 recently and she resumed her position as a judge on the reality show “Super Dancer: Chapter 4”.

She is also set to return to the big screen for the first time in 17 years with the films “Nikamma” and “Hungama 2”.

Sutapa Sikdar: I crave for your indulgences Irrfan

Mumbai– Sutapa Sikdar, wife of late actor Irrfan Khan, on Friday shared a throwback video from the shoot of his last film “Angrezi Medium”, where she is seen playing cards while Irrfan is busy listening to the number “Ude jab jab zulfen teri”.

Alongside the clip, Sutapa penned a note for her husband: “Three years ago with Irrfan’s team in London shooting. He wasn’t well this particular day but who can tell.”

She added: “hated playing cards but tirelessly witnessed reading his book and saw us playing even in the makeup van. I crave for your indulgences Irrfan #shootingwaits #AngreziMedium #wivesenjoying #imissyou,” she wrote as the caption.”

Sutapa and Irrfan got married in 1995. The two have sons Babil and Ayaan. Irrfan had been diagnosed with neuroendocrine cancer in 2018. He died in Mumbai’s Kokilaben Dhirubhai Ambani Hospital on April 29, 2020.

Mumbai– Actress Karisma Kapoor turned 47 on Friday, and she shared three glammed-up pictures on Instagram to mark the occasion.

“Making my years count, instead of counting the years #aboutlastnight #familyandfriends #onlylove,”she wrote along side the images, clicked by her daughter Samaira Kapur.

In the pictures Karisma is dressed in an animal print top, black pants, and, black heels. The pictures had garnered over 177,880 likes by the evening.

Warm birthday wishes poured in from celebrities like Manish Malhotra to Diana Penty and Sanjay Kapoor on social media.