Mumbai– Bollywood actress Taapsee Pannu has shared a sneak-peek from the first day’s shoot of her debut production “Blurr” on Monday.

“There is a certain calm about this place …. #Day1 #Blurr,” Taapsee wrote as caption.

The first look of the film was unveiled on Thursday.

Mumbai– Actress Kajol took to instagram and shared a picture that shows her getting ready for a shoot on a set.

“The feel of a set after so long is something else… it feels like a party!” wrote Kajol on Instagram, sharing her excitement to be back on the set.

In the picture post, Kajol was seen sitting on a chair getting her hair and makeup done, holding a mirror in her hands. The actress is seen dressed in a black dress.

Kajol was last seen in the film “Tribhanga”.

Her future projects include the biopic “Sasi Lalitha”, besides “Velaiilla Pattadhari 3” and Rajkumar Hirani’s untitled satire opposite Shah Rukh Khan. 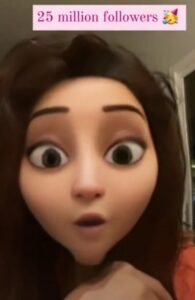 The actress shared a cartoon video of herself thanking her fans for the love. “25 Million strong. Thank you everyone for your love & support,” Madhuri wrote.

“Back in the nineties, you were the heartthrob of the entire nation. This 25 million is nothing,” commented a fan.

“Ma’am I’m a huge fan of yours and want to meet you,” shared another fan.

Remarking on the actress using a cartoon filter for herself, another fan wrote: “You naturally look like a princess you don’t need a filter.”

Madhuri currently features as a judge on the dance reality show “Dance Deewane 3”. The actress is all set to make her OTT debut with the upcoming thriller series “Finding Anamika”. The series also features Sanjay Kapoor and Manav Kaul.

Arshi Khan wants to learn wrestling from The Great Khali

Mumbai– Actress Arshi Khan, who became popular on “Bigg Boss”, is keen on learning wrestling from The Great Khali.

“Khali is my friend and he has inspired me to learn wrestling. Soon, I will start taking classes from him and then professionally get into the sports. I am excited and looking forward to it,” said Arshi.

About her wrestling plans, she adds: “After being an entertainer I now want to be part of sports, too. It will be like achieving another level of success. But that doesn’t mean I will quit entertaining my audiences. I will be performing and enjoying both arts. Right now, I am trying to adjust the two in my life.”

Mumbai– Sunny Leone finally got her husband Daniel Weber to wear a pink shirt and she says he looks nice.

Sunny posted a picture on Instagram, where she is seen fixing Daniel’s hair. The actress is dressed in a white and powder pink off-shoulder dress while her husband looks dapper in a black suit paired with a pink shirt.

“Finally got Mr. Weber in a Pink shirt. Looks nice! @dirrty99,” Sunny wrote as caption with the image.

Sunny has started shooting for her upcoming film “Shero”.

The actress had shared a poster of the film on Instagram on Saturday. In the black and white picture, she is seen sitting in a car. On the poster is written: “Sarah Mike. Begin her journey…”

“Shero” is a psychological thriller. The film is directed by Sreejith Vijayan and will be released in Tamil, Hindi, Telugu and Malayalam.

Esha Deol: ‘Ek Duaa’ touched me more as a mother of two girls

Mumbai– Actress-turned-producer Eshal Deol Takhtani, who is playing the central character in the upcoming “Ek Duaa”, shares what moved her to don the producer’s hat for the film. The first look and trailer of the film released on Monday.

“I wanted to do a film that not just entertains but also informs and inspires change. When I heard the concept of ‘Ek Duaa’, it truly touched me, and more so as a mother of two girls. So, I decided to extend my association with it as a producer rather than just being an actor,” Esha said.

As the presence of female members behind the camera has increased in the business of cinema, Esha said that it is a quite empowering and positive change towards gender equality.

“It is heartening to see how the number of women behind the scenes has increased not just in count but in visibility too in the industry, and I am happy to join the bandwagon,” said the actress.