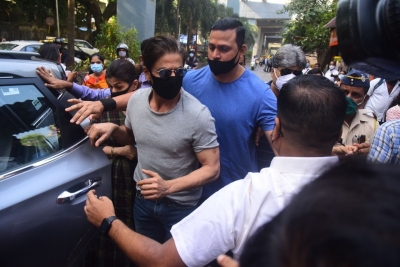 Mumbai– Bollywood megastar Shah Rukh left in a small motorcade along with aides and security personnel to pick up son Aryan from the Arthur Road Central Jail, while close family friend and ex-actress Juhi Chawla will be the bail surety.

The court has accepted Juhi – a co-star of SRK in many films – as the surety in Aryan’s bail and she signed the relevant papers and executed the bail bond before the court officials, said lawyer Satish Maneshinde.

He said that the court formalities are being completed and now the bail papers will be sent directly to the jail authorities which would process them before Aryan is released.

Simultaneously, SRK proceeded from his Bandra home to the ARCJ to welcome Aryan, expected to step out after an hour or so later this evening.

This was SRK’s second trip to the jail – earlier he had gone on October 21 for a 10-minute morale-booster tete-a-tete with Aryan inside the jail ahead of his bail plea in the Bombay High Court.

Prior to that, the superstar was allowed once to meet his son in the Narcotics Control Bureau lockup, where Aryan had broken down, but SRK has maintained a dignified silence throughout the ordeal.

Justice N. W. Sambre granted bail to Aryan and two others – Arbaaz Merchant and Munmun Dhamecha – on Thursday evening, but the bail orders were received only on Friday, paving the way for the trio to return home.

Soon after the bail verdict was pronounced Thursday, SRK reportedly shed tears of joy, and later met his entire legal defence team which had been fighting for Aryan’s release for the past four weeks.

The happy-go-lucky Aryan – who left home on October 2 for a fun-filled Mumbai-Goa cruise voyage, totally oblivious of what was in store – was suddenly detained after the NCB swoop, arrested the following day and has been in custody since then – making it a total of 28 days that he slept away from his ‘Mannat’ bedroom.

Mumbai– Actress Aahana Kumra, who is geared up for her upcoming series ‘Call My Agent: Bollywood’, has lauded the efforts of talent managers who manage celebrities.

“Hats off to the talent managers who manage the life of celebrities. Through my character, I have tried to understand and inculcate that into my role. I also sat with my managers and discussed with them at length and understood their work culture and how they operate. It is a tedious job,” Aahana said.

She added: “Contrary to this, sometimes there is a bifurcation in categories of clients amongst talent agencies and talent managers. Sometimes, as celebrities, we are also at the losing end, like for instance, I have lost one of the biggest projects, which I got to know later from the producers of the respective project.”

Aahana said that project went to “the privileged category of A-list actors.”

She shared: “So this kind of differentiation and bias does exist in our field. So while you have the best of the people working with you, managing your daily schedules, there is also a bit of an issue of how the chain of talent agencies internally functions.”

Produced by Applause Entertainment in association with Banijay Asia, the series is directed by Shaad Ali and will be available on Netflix from October 29.

While Taha is paired opposite Adah Sharma, the series also features actor Rajit Kapur who is known for his portrayal of Mahatma Gandhi.

Taha, who has acted in films like ‘Baar Baar Dekho’, ‘Gippi’, ‘Luv Ka The End’, shared some moments from the shoot.

“Rajat ji is a very funny man, extremely hilarious and has a great sense of humour, I am personally a fan of his work! This reminds me of the time that we spent during ‘Baar Baar Dekho’ where he played ‘Pandit ji’. There was this song where we danced together and had a lot of fun. I am really glad that we could work together again and I hope we get to collaborate more in the near future.”

Mumbai– Sara Arfeen Khan is ready with a fresh music video titled ‘Sonn Pann’. The song serenades you on a journey of self discovery.

The music video is laced with soft and slow rhythmic tunes and is a treat for all the music lovers.

Performed by Harshdeep Kaur, the track features Sara sizzling against the lush green locales of Kashmir amidst the flowing river, snow-clad mountains and clear sky.

Sonu Nigam steers us through his narration in this song composed by Hyder Dar.

The music video has been directed by Danish Renzu and the beautiful lyrics are penned by Sunayana Kachroo.

With the song being released on the official YouTube channel of Zee Music Company, the track is already creating wonders. Sara who has co-produced the video along with Danish, was all praise while sharing her experience for the song.

The actress said: “The first thing that crossed my mind after hearing the concept of ‘Sonn Pann’ was the relatability factor. I could relate to it and wanted to be a part of this heart-warming song.”

Sonu talked about the soulful number, he said: “Danish and Sunayana are dear to me and when they requested me to do the narration for ‘Sonn Pann’, I readily agreed. My best wishes for ‘Sonn Pann’.”

Kaur added: “Sonn Pann is a beautiful melody and it straight away takes you to the beautiful valleys of Kashmir. I simply loved singing in this sweet language. The song is extremely soothing and a treat for music lovers and singing it along with the amazing Sonu Nigam Ji was the cherry on the cake”.

The director said, “A music video is nothing but a melodious way of storytelling. I am glad that this song is getting a great response from everyone.” (IANS)