Mumbai– Actress Shama Sikander will be seen in the music video “Hawa karda” and the track is set to reach the audience on April 15. The song stars Shama alongside Gaurav Bajaj.

The track is sung by Afsana Khan and Sahil Syndicate. The music is by Geet and the lyrics have been done by Raas. The video of the song is directed by Dhwani Gautam and Alok Thakur.

“It’s a fun song, a peppy and trendy number. I am sure the young guns around are going to love it. We shot it with the utmost respect to all protocols and we wrapped up pretty quick,” Shama says.

The actress, who is known for her role of Pooja in the TV series “Yeh Meri Life Hai”, can’t wait for the audience reaction.

“(I am) Waiting for the song to come out and the audience’s reaction to it. I am happy to be able to work during such times where people have no work and are seeing some really difficult days,” she says.

Mumbai– Actor Ranveer Singh, who is all set to work with Tamil director S. Shankar in a Bollywood remake of his 2005 Tamil blockbuster “Anniyan”, hails the filmmaker as one of the finest minds in cinema. Ranveer shared a string of pictures on Instagram on Wednesday, where the actor-director duo is seen having a discussion. 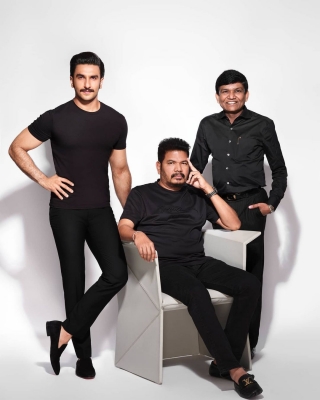 “What an honour…. to be under the tutelage of one of the finest minds in cinema…. @shanmughamshankar,” Ranveer wrote.

Shankar also shared a few photographs with Ranveer and welcomed him aboard.

“He is a maverick and charismatic showman no one else can play! Welcome aboard, @ranveersingh Can’t wait for this magnificent journey to begin mid 2022,” Shankar wrote.

“Anniyan” is a psychological action thriller that revolves around a disillusioned man, whose frustration at the corruption, social apathy and public negligence all around leads to a split personality that attempts to right the system.

Mumbai– Actress Urvashi Rautela is happy that the festival season is on, but she urges people to keep in mind that the pandemic is not over yet.

“India is a diverse nation and lately many festivals of different cultures and religions happened to be on the same day. Some parts of the country celebrated Ugadi, while others had Navratri and today is Vishu! But amidst of all the festivals I request everyone to be safe and follow all the precautions to avoid Covid-19. Everyone’s safety should be of utmost value,” Urvashi tells IANS.

The actress also has wishes for her fans. “Ramadan Kareem! May Allah give you all the prosperity and success. May God bless you with wealth and happiness and gives you a healthy life. Also wishing you a beautiful and high-spirited new year. Have a blessed and Happy Chaitra Navratri and Vishu,” said Urvashi, who will soon be seen in the web series “Inspector Avinash”.

Sara Khan: Singing is my second love after acting

Mumbai– TV star Sara Khan opens up on her love for singing, saying that the vocation is her second love after acting.

“I have always been fond of singing. It’s my second love after acting. I am so glad that my fans have loved my renditions. I hope to do a lot more soon,” she says.

Sara posted a cover of the popular ghazal “Hoshwalon ko khabar kya” on Instagram a while back.

“This cover is about all my favourite tracks. I received so much love and an amazing response from fans all over that I made my originals after this, one of which is “Blackheart” that touched millions of hearts.”

Sara lent her voice to, and has featured in, music singles like “Honney Bunny”, “Bham Bole”, “Chhad ke na ja”, “The Hushhh Song”, and “Bhartiya naari”.

On the acting front, Sara is currently seen in the show “Santoshi Maa: Sunayein Vrat Kathayein”. She will also be seen in the satirical comedy, “Camp Decent”, that takes on adult OTT content and the society’s outlook towards working women. Sara will also be hosting cookery a show “Annapurna Rasoi” on an OTT platform.

The actor wrote about how one must not venture out just because there are political rallies and religious gatherings. He said it was important to not fall prey to “peer pressure”.

“People asking why should we stay in when political rallies and religious gatherings are going on should remember the schoolyard argument re peer pressure ‘just because someone jumps off a cliff …’ #StayHome #staysafe.”

Section 144 has been imposed in the state of Maharashtra owing to the Covid outbreak, barring groups of more than five people in public.

Meanwhile, the actor will soon be seen in the film “Toofan”. He plays a boxer in the film directed by Rakeysh Omprakash Mehra, and featuring Mrunal Thakur, Paresh Rawal, Supriya Pathak Kapur and Hussain Dalal.