Mumbai– Actress Raveena Tandon is on a social media posting spree as her daughter Rasha Thadani celebrates her 16th birthday on Tuesday. While the first set of pictures were uploaded earlier in the day with Rasha and her friends, Raveena has recently posted another set of pictures of Rasha celebrating with her family.

The actress had earlier posted pictures of Rasha with her friends and pondered over the importance of having childhood friendships.

She had written in the caption, “Truly blessed are those who have lifelong friends… who make moments special.from babies to now.always together. Thankyou.”

On the work front, Raveena will soon be seen in the film “KGF: Chapter 2”, and will make her OTT debut with the series “Aranyak”.

Varun Sharma: Blessed I’m getting to work with creative minds in business

Mumbai– Actor Varun Sharma has a string of films coming up, notably “Cirkus” and “Fukrey 3”. His latest release, the horror-comedy “Roohi” is out, too, and the actor loves the fact that he is getting to work with several top creative minds in the business.

“I feel blessed that I am getting to work with some of the most creative minds in the business. I am shooting for Cirkus and I can promise that it’s going to be a hilarious rollercoaster ride. Post that, I will start shooting for Fukrey 3, which I am very excited about,” Varun said.

About “Fukrey 3”, he added: “I cannot wait to get back to the sets of the film, the first part of which gave me so much. What also makes me happy is the love I have been getting for Roohi.”

Varun is currently shooting for “Cirkus” directed by Rohit Shetty. The film also stars Ranveer Singh. In “Fukrey 3”, he will revisit his much-loved character Choocha.

Mumbai– Actress Esha Deol Takhtani is ready to face the camera again. Esha, a mother of two toddlers, has announced that she is gearing up for the lights, camera and action.

“By the grace of God I am getting good work offers and I am so ready to face the camera again! Also staying fit is always a top priority for me so I have lost all the weight I needed to and am back to my toned self,” Esha said.

“I have been reading many scripts. I have already finished working in one project and currently I am busy with the prep work of my next which will start by mid of this year and I am really excited about it,” she added.

Esha recently finished shooting for a Hindi film and is waiting for its official announcement.

“When I was approached with the script, I felt this is a story that has to be told. I am very sure that every woman will identify with this film. Also it has a beautiful message,” Esha shared about her upcoming film.

The actress was last seen in the short film “Cakewalk” directed by Ram Kamal Mukherjee, which released in February 2019. She is now open to exploring different characters on the big screen as well as digital platforms.

Mumbai– Veteran actress Neetu Kapoor shared a snapshot of some special moments with Alia Bhatt on her birthday and called the actress, her mother and sister “happy special people”. 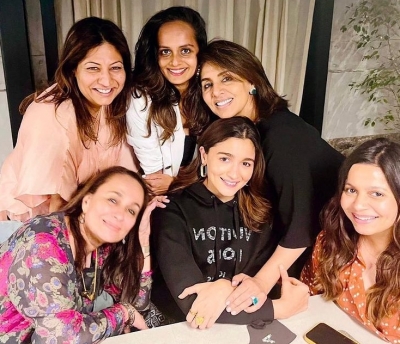 In the Instagram image, Neetu is seem with Alia, her mother Soni Razdan and sister Shaheen Bhatt.

Earlier on Monday, Neetu had wished Alia on the latter’s birthday. Alia, who is rumoured to be dating Neetu’s son, actor Ranbir Kapoor, turned 28 on Monday. Ranbir, who recently tested Covid positive, is in isolation.

Neetu will next be seen in “Jug Jug Jeeyo” with Kiara Advani, Varun Dhawan and Anil Kapoor.

Nimrat Kaur asks fans how they like their coffee

Mumbai– Actor Nimrat Kaur took to Instagram to profess her love for coffee.

The actress posted a picture of herself with a giant cup and saucer. She looked radiant in a pink printed top and minimal make up. “So that’s me. How do you like your coffee?” she posted.

The actress recently celebrated her birthday with her maternal grandmother and parents in Delhi. She updated fans with pictures of her birthday celebrations on social media.

Nimrat will soon be seen in the film Dasvi, where she will share the screen alongside Abhishek Bachchan and Yami Gautam. The film has been directed by debutant director Tushar Jalota.

Ayushmann heads to Delhi to wrap up ‘Anek’

New Delhi–   Actor Ayushmann Khurrana will wrap up the final schedule of his next film “Anek” in the city.

Ayushmann disclosed the news to fans on social media that Delhi would be the last schedule of the film.

The actor will shoot in the Capital for about two weeks.

The spy thriller is directed by filmmaker Anubhav Sinha and the unit shot in various parts of the Northeast before this.

This is Ayushmann‘s second film after “Article 15” with Anubhav Sinha. (IANS)