It’s also indicative of the growing pan-Indian visibility of Sandalwood film stars such as Rashmika, Yash and Kichcha Sudeep. Rashmika, in fact, has left behind her Tollywood compatriots Samantha Ruth Prabhu, who is ranked No. 4, and Allu Arjun, who follows at No. 5. The Kannada star’s social media handles, as a result, have been inundated with congratulatory messages from her fans.

The rankings were based on views, likes and comments garnered by posts and videos shared by celebrities of the Telugu, Tamil, Malayalam and Kannada film industries.

Rashmika’s social media content centres around her forthcoming movies and her takes on fashion. Yash, who’ll be seen soon in the ‘KGF’ sequel, posts pictures of his children and family celebrations, and of his travels and film projects. Both stars have ensured that the footprint of Kannada cinema extends much beyond its immediate market.

Mumbai– Taapsee Pannu has made a splash on OTT with her recent release titled ‘Rashmi Rocket’, the ripples of which are being felt. The film hailed as an agent of change in the mainstream Hindi cinema, tells the story of a national level athlete who finds herself drowning in public ire and social stigma after she’s ousted from the national team following the unfair practice of gender test. 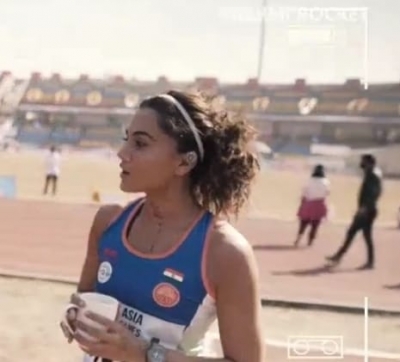 The actress has once again left the audience swooning over her performance in the film.

And now, the actress seems to have gone a mile further, she stepped into the shoes of a start referee on the race track. In a fresh BTS video shared by Taapsee on her Instagram, we can see the actress stoking up the fire in her ‘Rashmi Rocket’ crew to run a decisive lap to glory. She captioned the IGTV video, “Crew’s athletic meet! If the film is about a sprinter how can the crew not race !!!! #RashmiRocket crew in action!”

The video features different departments of the crew split into two teams as the participants run to the finish line. The video showcases the preparation for the race where the crew members practice their sprinting skills to compete with each other, it then proceeds to show the countdown to the race and finally, we see the members of two teams competing against each other.

Nisha Rawal on playing an insecure woman in ‘Meet’

Mumbai– Actress Nisha Rawal’s character of ‘Masum’ in the show ‘Meet’ has managed to stir a sense of excitement amongst the audience.

She revealed how she is enjoying learning how to portray the nuances of an insecure woman, who has had a lot to deal with in her life and feels that there’s much more to her character than what meets the eye. Being able to relate to ‘Masum’, Nisha is all the more pleased to be essaying the role.

Speaking about her character, Nisha says: “The last show I did 8 years back was with Shashi Sumeet Productions and my comeback on TV as an actor is also happening with the same production house. That makes ‘Meet’ even more special. I must mention that it has always been a wonderful experience working with them and I think that’s why in my journey so far, they have had a major role to play. Also, the character that I am playing is an antagonist, but I wouldn’t say that ‘Masum’ is a dreadful personality.”

The show presents the story of ‘Meet’ (Ashi Singh), who mirrors several women across the nation that are fighting societal norms of gender roles regarding work and responsibilities.

Nisha throws more light on her character, saying: “I think every person deals with their ups and downs in different ways and that’s why they react in certain ways in certain scenarios. ‘Masum’ is one such person who has had her share of insecurities and that keeps acting as a catalyst to making her appear as the villain. Of course, there are shades to every character, and I feel getting to play a role like this is quite amazing.”

New Delhi– Katrina Kaif has been keeping busy with the promotions of her Diwali extravaganza ‘Sooryavanshi’. Amidst her busy schedule, the actress took to Instagram to share her pictures and reels on Instagram. In two separate posts, the actress can be seen basking in the warm sun wearing a white gown with a thigh-high slit and open tresses.

While she captioned the pictures, “??day ?? #sooryavanshi” she also shared an Insta reel with the caption, “A day at the beach ?? #sooryavanshi”. As expected, the Gram erupted with her fans being overjoyed after finding her back in the spotlight as they showered praises on her.

One fan commented, “You look like an angel in white ????????” It’s not just the fans, the actress even left her industry friends stunned with the gorgeous pictures. While her ‘Zero’ co-star Anushka Sharma commented, “Beauty”, Ranveer Singh who has a cameo appearance in ‘Sooryavanshi’, commented, “Servinnnn” on her photos.

Fans have been eagerly waiting to see Katrina back in action and the Rohit Shetty directorial seems to be a perfect treat for the audience on Diwali. She will be seen reuniting with Akshay Kumar onscreen after a long time. ‘Sooryavanshi’5 is Rohit Shetty’s ambitious project that brings alive his cop universe. The film has been running in troubled waters as its release has been postponed multiple times because of the pandemic as it led to the shutdown of theatres across the country.

However, things look bright for the film as it’s set to hit the screens on November 5 and satiate the audience’s taste buds for a proper commercial potboiler, this Diwali.

Following the Maharashtra government’s lifting of civil restrictions and allowing the opening of theatres, the makers of the film made an announcement about its theatrical release through a special video.

Mumbai– Priyanka Chopra Jonas has been busy with the filming of the American spy series ‘Citadel’ since the past few weeks.

It’s a known fact that when Priyanka takes up a project, she puts her heart and soul into it, from sleeping on airplanes in order to make way for her watertight schedules to modifying her biological clock as per the time zones across the globe, the international star leaves no stone unturned to put up terrific performances that win the audience over and over again. 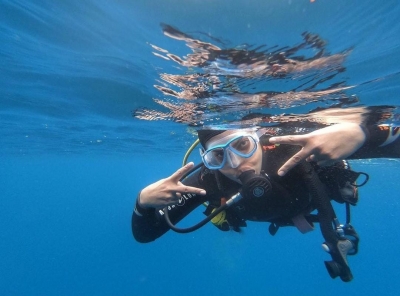 And those, who work hard, deserve a downtime once in a while where they could rejuvenate and strike back with a greater force.

Priyanka took some time off from her busy schedule to spend time in the cool blue waters of the Mediterranean sea. The actress went scuba diving accompanied by her brother-in-law Franklin Nathaniel Jonas, her mother Madhu Chopra and the camera crew of Citadel. She checked into her Instagram from the Spanish coast of Villajoyosa and shared several mesmerising pictures from her Sunday outing. She wrote, “There are days when the stress just needs to be silenced! What better way to do that than to explore the glorious underwater creations of God. I was very honoured that the camera crew from Citadel let me crash their party!”

Her pictures show a glimpse of the surreal underwater world wrapped in a turquoise blanket of the serene Mediterranean water. Priyanka also thanked her diving instructors as she wrote, “Big shoutout to the @alisubbuceo team. Penélope, Victor, Alejandro and everyone else, thank you for such a magical experience. I really needed it!! Thank you @tsigel for taking us out! So fun hanging with Sam, Paul, Josh, Tobias, Andy, Christina and Victor. Sunday well done! (sic)”.

Reacting to the pictures, her cousin and actress Parineeti Chopra who herself is a certified scuba diver and had recently shared the snaps from her diving gig in Maldives commented, “Yayyy. So happy you’re joining the wild side.” (IANS)