Mumbai– After wooing the audience with his power-packed performances in movies like “Simmba” and “Gully Boy”, actor Ranveer Singh on Monday treated his fans with his own quirky and fun GIFs. 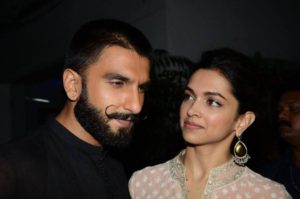 A GIF is an image file format that is animated by combining several other images or frames into a single file.

The “Padmaavat” star unveiled several mood GIF’s on social media created from Giphy.com. In one of them, Ranveer can be seen dancing, while in other, saying hi.

Not only his friends from showbiz, it seems Ranveer’s fans are also enjoying his GIFs.

In the GIF, where Ranveer is hiding his face with happiness, one user commented: “Ranveer’s reaction when he sees Deepika every morning.”

Another user wrote: “Entertainer No. one”.

SRK sets out on Dubai adventure to unravel secrets

SRK features in a series of videos that are part of Dubai Tourism’s #BeMyGuest campaign. It consists of a series of films across social media and online platforms, highlighting iconic locations and sites in the Middle Eastern city.

The third video launched on Monday starts off with the “Chennai Express” star reading a riddle: ” In the jewel of the ocean, they fall from the sky.” The subtitle quotes Shah Rukh saying: “I need to solve some clues.”

He then jets off on an exciting adventure, exploring and solving riddles till he reaches his destination La Perle, an acrobat show.

The video ends with Shah Rukh narrating to his friend the mystery he solved, which would lead to the next one.

Throughout the video, Shah Rukh reaches out to his fans across the world, seeking their help in solving the riddles, and inviting them to find what other fantastic experiences await them in Dubai.

The 53-year-old star tweeted the minute-long video on his twitter handle: “Three coins, one old box and tons of clues to solve. Wonder what my next challenge will be?”

Mumbai– Ahead of the premiere of “Wild Edens: South Asia” documentary in India, actress Freida Pinto urged people to “focus on the planet before the effects of global warming become absolutely irreversible”.

The documentary highlights the issue of climate change with an emphasis on the unique and delicate habitats of India and Bangladesh and the region’s rarest and most spectacular wildlife, read a statement.

So being an ambassador of the “Wild Edens: South Asia” project, Freida said: “We all share a common vision that human kind has to be inspired to focus on the planet before the effects of global warming become absolutely irreversible.

“‘Wild Edens…’ will devote an entire episode to my native country of India. With this, millions of people around the world will have the opportunity to see my country as an exotic mix of wild nature, rare animal life, unique wildlife sanctuaries and magnificent landscapes that are mesmerizing and are also under the threat of dangers of climate change.”

The documentary will be premiered on Tuesday here. It will air on National Geographic.

Films more important to me than fame: Janhvi Kapoor

Mumbai– Actress Janhvi Kapoor says her films are more important to her than earning fame as she has experienced fame since her childhood.

“Fame is important for every actor and whatever fame I have earned is all because of my family. I have been getting recognised more after my first film so, I am very grateful for love and support which I received from the media and the audience.

“I have experienced fame since my childhood so now my work, acting and films are more important to me than fame,” Janhvi told media at HELLO! Hall of Fame Awards 2019 here on Sunday.

Janhvi– the elder daughter of late actress Sridevi and producer Boney Kapoor, made her Bollywood debut last year with the film “Dhadak”.

At the event, Janhvi also spoke about actress Madhuri Dixit Nene, who replaced Sridevi in the movie “Kalank”. She said that she is looking forward to watch her in the movie.

“I was excited to see her in ‘Kalank’ from audience point of view. I think teaser of ‘Kalank’ and every character’s look in the film is looking really beautiful so, I am really excited to see that film,” added Janhvi.

Janhvi is currently working on the untitled biopic of Gunjan Saxena, the Indian Air Force’s female combat pilot, who took part in the Kargil War in 1999.

New Delhi– Actress Soha Ali Khan says embracing motherhood has helped her evolve and has been a life changing experience.

Soha married actor Kunal Kemmu in 2015 and the two welcomed their first child — a daughter named Inaaya Naumi Kemmu in 2017.

Has parenthood evolved Soha and Kunal?

“Yes, I think separately and together. A marriage evolves and adapts to a new person being an integral part of your life,” Soha told IANS over e-mail.

“And independently also, I am the youngest in my family, I have never been responsible for anyone else, I’ve never had to look after anyone, I have never changed a diaper or fed someone or made someone sleep or been around someone so vulnerable…So it really is a life changing experience,” she added.

Asked if she finds constant vigilance on Inaaya stifling, she said: “It can be challenging and exhausting to watch after someone all the time but you know that’s life. You have to understand that life is different now and it will never be the same.

“There’s always been a part of me that wanted to create and back meaningful films, and there couldn’t be a better starting point for me than ’15 August’,” Madhuri said in a statement.

She added: “This is an endearing, relatable story that has been brought to life beautifully by the talented Swapnaneel Jayakar and actors Rahul Pethe, Mrunmayee Deshpande, and Adinath Kothare.”

Set in a Mumbai chawl, the film follows the course of a series of mishaps that occur on a single day, as its residents prepare for the Independence Day flag-hoisting ceremony.

The film revolves around how the course of the day unfolds on a not-so-typical Independence Day — when a lover, in his quest to win over his beloved, ends up creating complete mayhem, compelling all the residents to unite and help him out of his mess.

The film highlights what independence, love and affection mean to the residents of the colony. (IANS)