Ranveer sings praises of Ajay-Atul for ‘The Big Picture’ music

During the shooting of one of the episodes, when Ranveer heard the music track, he instantly said, “Kya music banaya hai Ajay-Atul ne, feel aa jati hai!”

Feeling touched by the good words coming from the star, Ajay-Atul said, “We have always strived to give our very best in everything we do. To hear such sweet words from a talented superstar is heartening. Audio-visuals are the ultimate combination of any content, and we are sure that ‘The Big Picture’ will be an absolute treat to watch and will be participated by all!”

The Big Picture starts from October 16 on Colors.

Kriti, Rajkummar amp up ‘Hum Do Hamare Do’ track ‘Bansuri’

Mumbai– After creating an Internet sensation with the A.R. Rahman-composed track, ‘Param Sundari’, Kriti is back, this time with the consummate performer Rajkummar Rao, for the latest ‘Hum Do Hamare Do’ track, ‘Bansuri’. 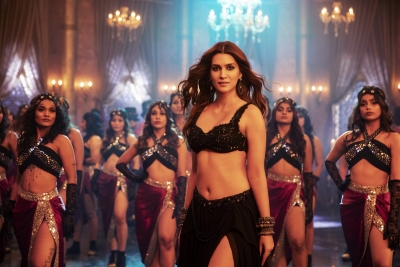 Composed by Sachin-Jigar, ‘Bansuri’ is a foot-tapping melody, and Rajkummar and Kriti show some stunning moves in the video. The duo’s sizzling chemistry makes the number as much a visual as an audio treat.

The film narrates the story of a man who devises a hilariously whacky plan of “adopting” a set of parents so that he can get married to the love of his life. It also stars Paresh Rawal and Ratna Pathak Shah in pivotal roles.

Talking about the composition, music composer duo Sachin-Jigar said: “‘Bansuri’ is a lively track that is sure to be an instant favourite among young people. We have blended the magic of the Indian flute with the funky charm of desi beats for this quirky, fresh and snazzy number.”

Choreographed by Piyush-Shazia, the track has been penned by Shellee and crooned by Asees Kaur, IP Singh, Dev Negi as well as the composers Sachin-Jigar. Produced by Dinesh Vijan and directed by Abhishek Jain, ‘Hum Do Hamare Do’ starts streaming from the October 29 on Disney+Hotstar.

Mumbai– Actress Urvashi Rautela has recently announced the name of her next film which is titled ‘Dil Hai Gray’. It’s a Hindi remake of Tamil film ‘Thiruttu Payale 2’.

Urvashi Rautela will be seen alongside Vineet Kumar Singh and Akshay Oberoi.

Urvashi shares: “I am excited to announce the title of my next film ‘Dil Hai Gray’ on the auspicious day of Vijaya Dashami. The film is very close to my heart and it was lovely working with director Susi Ganeshan sir, producer M Ramesh Reddy sir, and my co-stars Vineet Kumar Singh and Akshay Oberoi. ”

“The film has created a massive response in the south industry and I am very positive about the story that it will be also be loved by the audience here. I hope my fans would bless us with their love and support. Super excited to watch my film on the big screen after a long time,” she concludes.

Mumbai– Actress Sapna Thakur who plays the role of ‘Samaira’ in ‘Kyun Rishton Mein Katti Batti’ recalls celebrating Dussehra in her hometown of Chandigarh. She says it was all fun and the festival was celebrated in a grand way.

The actress shares: “Ever since I came to Mumbai, I haven’t been able to experience Dussehra in its grandest form here yet. But in Chandigarh, the festival is celebrated in a pretty glorious manner. In fact, 20 days before the main festival, we celebrate Ram Leela with our close ones too, and I have a number of warm memories associated with those days.”

She reminisces further enjoying the festivity with family, enjoying fair and munching snacks.

“I remember all of us would meet together in the cold weather and experience the festivities together all night long while munching peanuts and other snacks. On the final day of Ram Leela when ‘Ravan Dahan’ would take place, grand ‘melas’ would also be set up and the ten-headed idol of Raavan would be set in flames. I was quite young the last time I visited that ‘mela’ and I remember getting lost among the crowds.”

“But overall, I’ve had great fun during Dussehra till now and I wish everyone a happy season of festivities,” concludes Sapna.

New Delhi– Television czarina Ekta Kapoor shares about her audio show ‘Darmiyaan’ starring Sriti Jha and Shabir Ahluwalia. She opens up on the experience of doing this women-centric show and also how the audience will relate to it.

Ekta says: “Conceptualising entertainment content for Audible has been a fantastic experience and has helped me push the creative envelope further than ever before. With the audio medium, you do not have the support of visuals to communicate your thoughts which makes the process challenging and pushes you to innovate. My first audio show ‘Darmiyaan’ has everything – love, unbelievable scandals, shocking twists and much, much more. I’m sure listeners are going to love it, and become audiophiles for life.”

Ekta has produced a number of shows and worked with numerous popular faces of television. She elaborates about the particular reason behind her choice of Shabir Ahluwalia and Sriti Jha.

“The duo has exceptionally powerful chemistry and have been a very hit duo on my shows, I knew they would bring ‘Sakshi’ and ‘Ridhaan’s characters to life beautifully. Sriti has such depth of voice, such maturity and Shabir, he is the quintessential man child – brazen, bold and so loveable,” adds Ekta.

‘Darmiyaan’ is a story of a couple ‘Sakshi’ whose beautiful married life undergoes a sudden upheavel when her husband’s explosive sex tape is leaked online. She loses all her hopes until ‘Ridhaan’, a young man comes into her life. (IANS)