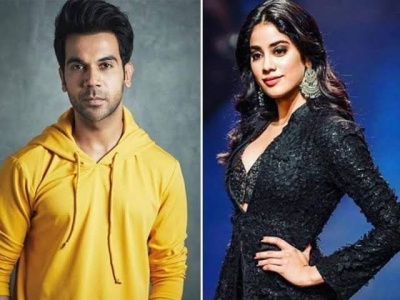 Mumbai– Rajkummar Rao and Janhvi Kapoor will soon reunite as the two have been roped in for Dharma Productions’ next ‘Mr And Mrs Mahi’. This will be their second outing after the hit horror-comedy ‘Roohi’.

Dharma head honcho Karan took to his social media to announce the film through a 2D motion graphics animation video. Karan wrote on his Instagram, “One dream, chased by two hearts. Presenting #MrAndMrsMahi, directed by Sharan Sharma who is back with another heart-warming story to tell with his touch of magic! Starring Rajkummar Rao & Janhvi Kapoor, a partnership to look forward to. See you on the field aka the cinemas on 7th October, 2022.”

Underlined by mellow piano notes soon enveloped by cricket commentary, the video lists the names of its two leads along with their respective characters as it approaches the crescendo.

The film which will soon go into production, will be helmed by ‘Gunjan Saxena: The Kargil Girl’ director Sharan Sharma and is slated to hit the theatres on October 7, 2022.

Mumbai– Akshay Oberoi, who is known for films like ‘Gurgaon’, ‘Kaalakaandi’ and ‘Laal Rang’, is currently gearing up for the release of his Disney+ Hotstar series ‘Dil Bekaraar’.

Akshay will be seen alongside Raj Babbar, Poonam Dhillon, Padmini Kolhapure, Sahher Bambba, Medha Shankar and Sukhmani Sadana. The show directed by Habib Faisal tells the story of love and ideology set in the 1980s.

Recently, Akshay spoke about his experience of working under the leadership of director Habib Faisal. He said, “Habib Faisal is a ‘specific’ director. He has an eye for detail; he creates a ‘specific world’ for you. He ensures that everyone gives their best of ability; he holds your hand through the journey and helps you do it. He would make me read and talk to me about things that inspired me about the ’80s world which made my job easier.”

He added that this series was like a crash course for him to understand the era of the ’80s, “All great directors do this – they learn their world so well and make your job easier. He knew the characters so well; he understood what they looked like, sounded and felt like too. He had an exact vision of what he wanted and I completely relied on him for my character. The series was a crash course of the ’80s for me and thank God Habib Faisal was my director.”

Produced by Sobo Films, ‘Dil Bekaraar’ is all set to release on Disney+ Hotstar from November 26.

Mumbai– ‘Student of the Year 2’ actor Abhishek Bajaj, who is seen playing the role of a Punjabi pop star ‘Aman’ in the web series ‘Your Honor 2’, opens up on his role and how he find it different from previous on-screen characters.

Abhishek says: “I am playing the biggest pop star in Punjab and his songs are always a hit whether it is ‘Downtown Boys’ or ‘Billi Billi Akh’ these songs are super cult songs in Punjab. Whenever he goes to a party he is the charm of the party and every fan goes mad for him and he is a spoiled brat like he is into drugs and thinks that everything revolves around him and he knows that he has stardom which he can use anyway.”

“This guy is full of energy and there is no such time where there is a dull moment and his life turns completely when he gets caught in a drug case and the whole scenario changes after that moment,” he adds.

The series also features actors Gulshan Grover and Mahie Gill. Abhishek further shares about his character and says that ‘Aman’ is the one for whom people go crazy. His life is full of ups and downs. He faces downfall in his career, when he gets caught in a drugs case.

Lonavla– She ruled the 1990s with her effortless performances and swept the audiences off their feet with her dance moves, now actress Raveena Tandon is all set to maker her digital debut with Netflix’s upcoming crime thriller ‘Aranyak’, where she will be seen playing a police officer.

The series spotlights the hardships and prejudices female officers face as they try to strike a balance between their work and personal lives.

The over two-minute-long trailer was unveiled in Lonavla.

Set in the dense forest, Raveena plays a local cop, who all her life waits for a “big case” and one fine day a news of a teenage tourist’s murder shakes her up and joins forces with her city-bred replacement Angad played by Parambrata Chatterjee to solve the case.

As the two struggle to find the serial killing entity, a forgotten folklore is revived. The trailer also features Ashutosh Rana, Meghna Mali and Zakir Hussain.

The 47-year-old actress will be seen playing a “fierce” officer named Kasturi Dogra and says her “character in itself is so strong she would reach out to you anyhow.”

Describing the characteristics of Kasturi, Raveena added: “She’s a fiercely independent, super talented cop, who is waiting for an opportunity to excel in her life. She’s surrounded by her male counterparts, wants to achieve something in her career and the way we women juggle our career, lives, emotional support that we get or don’t get from home.”

The actress during the trailer launch of ‘Arnayak’ added: “Our priorities are our children, in-laws, family, that’s what completely attracted me to her character. A lot of women can identify with that, especially our women in uniform.” (IANS)