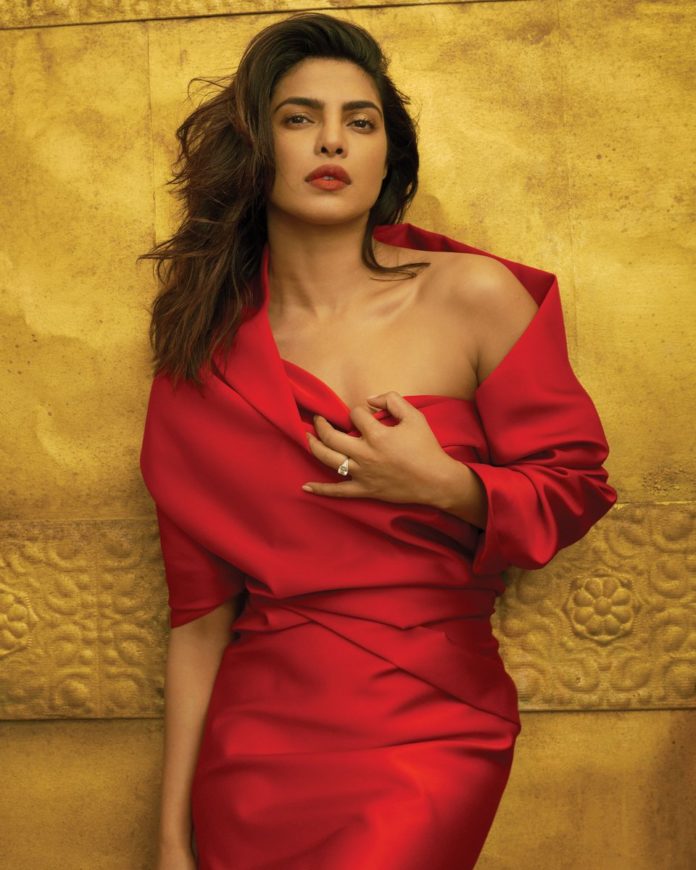 Los Angeles– Indian actress Priyanka Chopra says she enjoys “sexting” with her pop-singer husband Nick Jonas when they have some time apart.

The 36-year-old actress married her 26-year-old beau in December last year, and she also said they like to share racy images with each other to keep the spark alive when their work keeps them away from each other.

Appearing on “Watch What Happens Live With Andy Cohen”, she was asked by the host if she believed “in sexting or FaceTime sex during long stints apart”, and she immediately replied: “For sure.”

Priyanka also said that she has helped her husband with his “manscaping”, but explained it was just the back of his head, reports femalefirst.co.uk.

The star was later grilled on their wedding, and was asked to choose which of Nick’s famous brothers got them the best gift to celebrate their special day.

She added: “Well the good thing is, Kevin got us hundreds of bottles of wine, and Joe got us an amazing fridge which looks like a car to put it all in.”

Meanwhile, Priyanka previously revealed the key to a long-lasting relationship is “trust” and “respect”.

Los Angeles– Amidst the rumours of actress Priyanka Chopra Jonas and Duchess of Sussex Meghan Markle’s feud, there are new reports which claimed that everything is fine between the two.

“All the rumours that Priyanka and Meghan aren’t friends anymore are totally not true,” eonline.com quoted a source saying.

Earlier it was reported that Priyanka was upset with Markle for skipping her wedding to singer Nick Jonas.

The two actresses were friends, and Priyanka was a guest at Markle’s wedding to Prince Harry in May last year. But the Duchess of Sussex declined to attend Priyanka’s wedding in December.

Apparently the “Quantico” star too declined to attend Markle’s baby shower in February.

The source added: “Priyanka and Meghan are still very close friends and they talk frequently. Meghan confides in Priyanka about the adjustments she has to make with being a royal.”

Mumbai– Actress Alia Bhatt, who is playing one of the leading ladies in the upcoming film “Kalank”, on Friday visited Mumbai’s iconic Gaiety theatre for the first time in her life.

She was here to launch the film’s song “First class”.

The actress arrived alongside her co-star Varun Dhawan at the theatre, located in Bandra, one of the suburban areas of Mumbai city where thousands of her fans were waiting to catch a glimpse of their favourite star.

As the fans welcomed the duo with a loud cheer, Varun addressed them saying, “it is overwhelming to come and see the responses from all you guys.”

He also shared that “Alia is visiting the theatre for the first time.”

At the event, the fans demanded that Alia perform live on stage. So, Alia performed Kathak for her fans on the stage. Later, Varun also joined her and flaunted his dance moves.

After the event, they both entertained their fans outside the theatre. Varun and Alia stepped on the theatre’s roof and wooed the crowd by grooving on their just launched song “First class”.

The song also features Aditya Roy Kapur, Madhuri Dixit Nene and Kiara Advani. Composed by Pritam and written by Amitabh Bhattacharya, it is sung by Arijit Singh and Neeti Mohan.

New Delhi– Actor Jackie Shroff, who has joined the sets of the upcoming movie tentatively titled “Thalapathy 63”, describes working with Tamil actor Vijay and the film’s director Atlee as fabulous.

Asked about being a part of the film, Jackie told IANS over phone from Mumbai: “It’s just fab to work with Vijay, who is the son of S. A. Chandrasekhar my director from the film ‘Kudrat Ka Kanoon’. So, catching up with his dad and the superstar (Vijay).”

The 62-year-old actor called Vijay a “gentle giant and a nice guy”.

Without divulging much about his role, Jackie added: “Also Atlee, (he’s) a great director… I am rocking out there. They are looking after me like a child.”

This will be Jackie’s third outing in Tamil, his previous films include names like “Aaranya Kandam” and “Maayavan”. He had also done a cameo in “Mupparimanam”.

Jackie has been in the Hindi film industry for almost four decades and has also appeared in other language films such as Konkani, Kannada, Marathi, Oriya, Punjabi, Bengali, Malayalam, Telugu, Bhojpuri and Gujarati.

On the Bollywood front, Jackie will soon be seen in “Romeo Akbar Walter”, “Prasthanam” and “Student of the Year 2”.

Priyamani to raise funds for education of girls

Bengaluru– Multilingual film actress Priyamani will be running a marathon here to raise funds for girls’ education and sanitation.

She will be running the TCS World 10K Marathon on May 19 in support of NGO Habitat for Humanity India.

Priyamani has partnered with the NGO to create awareness on safe sanitation and menstrual hygiene for girls under the campaign — “Stay At School”.

“The school drop-out rate for girls is drastically rising owing to lack of toilets and knowledge of menstrual hygiene. Lack of access to basic sanitation facilities can be a traumatic experience for girls especially during menstruation period and have an adverse impact on their health,” Priyamani said in a statement.

The “Drona” actress says as a concerned citizen and a woman, she feels it is her duty and responsibility to focus attention on this issue.

“By participating in the marathon I am taking a step forward in helping the girls stay in school,” she added.

Talking about the initiative, Rajan Samuel, Managing Director, Habitat for Humanity India said: “Every year, more than 23 million girls drop out of school after reaching puberty.

“The major reason for the high dropout rate is lack of hygienic sanitation facilities in the school… We aim to create awareness and ask more people to support the cause.”

Ajay, who floored the audience with a stunt where he balanced on two bikes in the 1991 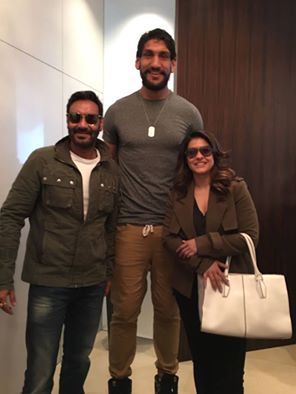 film, took the fans down the memory lane on Friday morning by unveiling the upcoming film’s poster, where he is seen doing a 180 degree split between two cars. The film’s actresses, Tabu and Rakul Preet Singh, are seen sitting on the bonnet of the two cars.

Along with the poster, Ajay also posted a warning on Twitter.

The film is written and co-produced by Luv Ranjan and directed by Akiv Ali which marks his directorial debut. “De De Pyaar De” is scheduled to release on May 17.

Mumbai– Actor Sooraj Pancholi will be donating the earnings of his upcoming film “Satellite Shankar” to army camps.

Directed by Irfan Kamal, the film is shot in different regions — Punjab, the South and in Himachal near the China Border. He has decided to give his earnings to the army base camps in these three different regions so that the money can be used for their children and to arrange amenities for them.

“Its been such an incredible journey and experience shooting for this movie. Meeting the real jawans shooting at real locations meeting the family, all of it has been extremely beautiful,” Sooraj said in a statement.

The actor calls it a “small deed”.

“We are living here because of them. They live at borders to protect us. There are days where they don’t speak to their families because of where they live. It’s a very small deed from my end,” added Sooraj, who is the son of actors Aditya Pancholi and actress Zarina Wahab.

“Satellite Shankar” is scheduled to hit the screens on July 5.