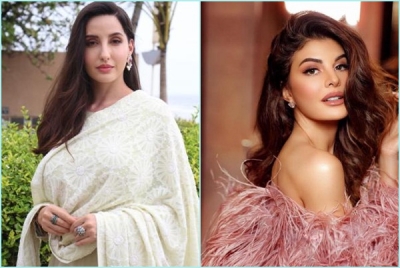 The case pertains to an FIR filed by the Delhi Police in connection with an extortion racket allegedly perpetrated by scamsters Sukesh Chandrashekhar, Leena Maria-Paul and others, involving several bigwigs.

The central probe agency had already recorded their statements earlier and they are being summoned again as witnesses for further probe.

Sikandar Kher: OTT has led to democratisation of our film industry

Mumbai– Actor Sikander Kher, who was last seen in the web series ‘Aarya’, has hailed the digital platform. He says OTT has led to the democratisation of the film industry and has helped in bringing out brilliant content and actors coming to the limelight.

Sikandar said: “OTT has definitely led to the democratisation of our film industry and we have seen some brilliant content and actors coming to the limelight. I have spent almost a decade in the industry and have seen all the highs and lows that people go through.”

He added: “But it took a pandemic and rise of the OTT platforms for filmmakers to realise the kind of talents India can produce. Well, I am glad this happened, and I am sure that the scope of telling stories and performing them will only increase from here on.”

He is currently gearing up for his other projects in the pipeline such as Vasan Bala’s ‘Monica O My Darling.’

Anushka to daughter Vamika: Making me braver, courageous every day

Mumbai– Anushka Sharma’s latest picture with her daughter Vamika is winning the internet. The actress-producer credits her little bundle of joy for making her braver and more courageous everyday.

On Wednesday night, Anushka posted a heart-warming picture with Vamika on Instagram on the occasion of Durga Ashthami. In the image, the actress is seen smiling looking at her daughter, whose back is towards the camera.

“Making me braver and more courageous every day. May you always find the strength of the goddess in you my little Vamika Happy Ashtami,” Anushka captioned the image, which currently has 3.3 million likes on the photo-sharing website.

The picture soon caught the eyes of many Bollywood personalities.

The doting picture made actor Ranveer Singh say “Oh-lay!” in the comment section.

Vamika was born on January 11. Anushka and her star cricketer husband Virat, who are fondly called as ‘Virushka’ by their fans, had tied the knot in December 2017 in Tuscany, Italy.

Taapsee Pannu: Sports stars are actually the real heroes for me

Mumbai– Actress Taapsee Pannu, who plays a sprinter in her latest film ‘Rashmi Rocket’, says that she is always in awe of sports personalities and that she feels they are the real heroes.

She candidly revealed that squash is her favourite sport to play and when it comes to her favourite sportsperson she said, “I don’t think I can choose because I am in so much awe of these sportspeople, they are actually the real heroes for me. I follow them more than I follow any other profession, or I don’t think I consider any other profession as heroic as representing the country!”

Taapsee also confessed that running comes naturally to her, since she was an athlete in school and would run in 100, 200 and 400-metre races. For her role, she had to learn some professional sprinting techniques. Next, she had to unlearn and readopt the right technique to keep her free of injuries.

She shared these anecdotes in an exclusive chat with IMDb.

When asked about her most favourite memory on sets, she reminisces, “Once when I was sprinting during shots and there were real athletes, we had called who were there running with me, who were probably watching the training…the compliments from them that I did really look like a real athlete were the most cherished ones coming from the people who do it as a profession.”

Salman Khan all set to launch his NFT collection with BollyCoin

Mumbai– Following in the footsteps of megastar Amitabh Bachchan who took the decision to launch his non-fungible token (NFT) collection, Bollywood star Salman Khan too has announced the launch of his NFT collection on social media.

Salman took to Instagram on Wednesday where he made the announcement of the launch of his own collection of NFTs that will be available on BollyCoin.

BollyCoin is a dedicated, Bollywood-themed NFT started by filmmaker-actor Atul Agnihotri. It allow fans to invest in clips and stills from films, iconic dialogues, posters, unseen footage, and social media content and merchandise from film personalities.

Going by the website of BollyCoin, it states that the presale and auction will go live from October 2021. (IANS)