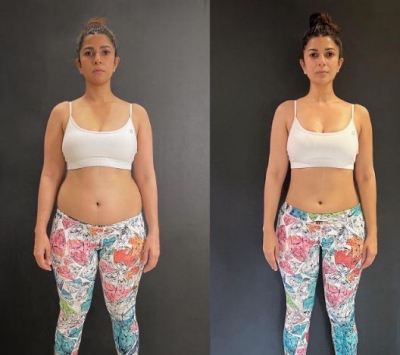 Mumbai– Bollywood actress Nimrat Kaur, who was recently seen essaying the role of Bimla Devi “Bimmo” Chaudhary in social comedy “Dasvi”, has shared her body transformation journey on her social media and made a thought-provoking remark about body positivity.

Taking to Instagram, she posted a collage of before and after pictures where she can be seen wearing the same athleisure clothing. She also shared a long note. In the caption, the actress wrote: “Weigh on it. Swipe left for my thousand words this picture won’t speak.”

In her note, she said: “In the age of heightened expectations regarding what we ‘should’ look like, at all times — gender, age and profession no bar, I’m sharing a small chapter from my life that brought with it learnings that shall last a lifetime.”

The actor said that the size up for “Dasvi” led her to touch above 15 kilos from her usual body weight. She said that while she relished the process after an initial hesitation, a few people around her often gave her snide remarks or an unsolicited advice about her eating habits.

“This entire exercise taught me as a girl and an actor both, how non-negotiable it is for each of us simply mind our own business. Having completed the circle of this journey and back to physically being me, today in the truest sense I’ve learnt how not to let an outside perspective decide my relationship with me,” she went on to say in her note.

Urging people to be more mindful, sensitive, and empathetic towards each other, she concluded: “Be kind. Be sensitive. Be graceful. Don’t make someone’s day worse if you can’t make it better. Be responsible. Make only your mind and body your business. No one else’s.”

Mumbai– The 2012 rom-com, ‘Vicky Donor’ recently clocked ten years of its release. Actress Yami Gautam, who made her Bollywood debut with the Shoojit Sircar directorial in which she starred opposite Ayushmann Khurrana, recently reminisced about the movie calling it a major turning point for her. 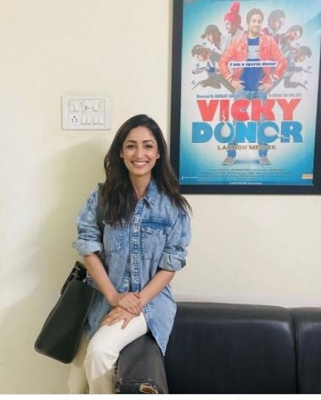 The actress took to her Instagram and posted a picture from her recent visit to the studio where she auditioned for the film. She wrote in the caption, “The place where it all began! Started my journey auditioning for Vicky Donor right here! (This sofa too was here). A recent visit to this studio took me down memory lane, reliving so many beautiful moments through the journey! Thank you, Shoojit da & our entire team (sic)”.

Apart from the flood of rave reviews that came her way, the film also gave Yami a taste of great content and encouraged her to take on versatile roles with riveting stories and she went on to star in several such films like ‘Badlapur’, ‘Kaabil’, ‘Uri’, ‘Bala’ and the recent releases, ‘A Thursday’ and ‘Dasvi’.

Rakul Preet Singh: Being an actor has still not settled in my head

New Delhi– Rakul Preet Singh, who currently awaits the release of her upcoming film ‘Runway 34’, has talked about her journey in acting in films. She said that being an actor has still not settled in her head and that she thinks she has not achieved a lot yet. 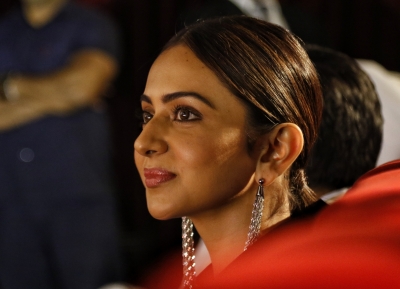 The 31-year-old actress made her Telugu and Tamil debut with the bilingual ‘Keratam’ in 2011. She has gained stardom in Telugu and Tamil cinema with successful films including ‘Venkatadri Express’, ‘Loukyam’, ‘Pandaga Chesko’, ‘Sarrainodu’, ‘Dhruva’, ‘Rarandoi Veduka Chudham’, ‘Spyder’ and ‘Theeran Adhigaaram Ondru’. Rakul made her Hindi film debut in 2014 with ‘Yaariyan’ and tasted success with ‘De De Pyaar De’ in 2019.

Talking about her 11 year acting journey, Rakul in a conversation with IANS said: “I don’t look back to begin with because I don’t think there is a point in looking back. I am not a person who evaluates ‘oh I have come so far’ because I still don’t think I have achieved alot. I have still a lot more to do.

“Me being an actor has still not settled in my head and I don’t want it to settle because I want myself to keep craving for more.”

Rakul calls herself a “very greedy actor, who wants to do more.”

“I want to do more films, different roles, do the commercial ‘naach gana’ films, do films like Runway, strike a balance for every audience. So I am a very greedy actor and I just look in the future.”

‘Runway 34’ is reportedly inspired by the true events of the Jet Airways Doha to Kochi flight that had a narrow escape on August 2015, after facing difficulties to land at Cochin International Airport due to bad weather and unclear visibility at 5.45 in the morning.

The film, which also stars Amitabh Bachchan, Rakul Preet Singh, Boman Irani, Aakanksha Singh and Angira Dhar, is set to hit theatres on April 29, where it will clash with the Tiger Shroff and Nawazuddin Siddiqui-starrer ‘Heropanti 2’.

Mumbai– Actress Mrunal Thakur has credited her stint on the small screen for her now growing career in Hindi cinema. 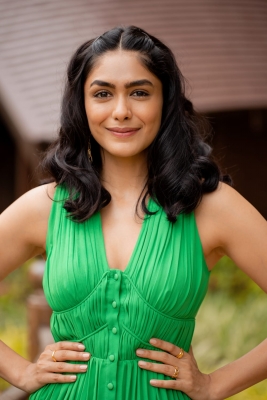 Talking about living several lives in one courtesy her profession, Mrunal in a candid chat with IANS agreed that actors are “lucky”.

“Lucky because of attention and eyeballs and we get to live so many lives. I had to create those opportunities to be lucky. To be able to be where I am today. Full credit goes to where I started from – television,” she said.

The 29-year-old actress stepped into the world of acting in 2012 with ‘Mujhse Kuchh Kehti…Yeh Khamoshiyaan’. She gained the spotlight with the show ‘Kumkum Bhagya’. Later, she made her debut in Hindi cinema with ‘Love Sonia’. After which, she was seen in films including ‘Super 30’, ‘Batla House’ and ‘Dhamaka’.

Discussing about how difficult or easy it is for her to attach and detach from an intense role, Mrunal said: “It is very difficult because acting is not just from the outside, it is very internal and imagine when you’re body is like you yourself are going through so many emotions above that you have to play so many emotions on screen and then come back home.”

Mrunal is gearing up for the release of her upcoming film ‘Jersey’, a sports drama film written and directed by Gowtam Tinnanuri, being his Hindi directorial debut and the remake of his 2019 Telugu film of the same title. (IANS)