Mumbai– Actress Neha Marda says gluten-free food and intermittent fasting have worked wonders for her physique. She used the lockdown period to strengthen her immunity and also work on herself.

“I always wanted to be fit and have toned body, my agenda is not just to lose weight but to gain right amount of muscle and not to have extra body fat which keep popping out,” said Neha.

“Every individual has a different body type and things work out differently for them, be it diet or fitness regime. It is intermittent fasting and gluten-free food that worked for me to achieve my fitness goals,” she added.

She admits not being a a huge fan of gyms.

“I personally don’t use the gym, but that doesn’t mean I’m advising not to go to the gym. I believe that gym workouts are meant to tighten up the muscles but it doesn’t last long. I am not a gym person, I am a power yoga meditation person. I do a lot of cardio by myself, dancing is a hobby that keeps me very healthy and that is my mantra,” she shared.

On the work front, Neha is seen playing Shubhra in the show “Kyun Rishton Mein Katti Batti”. It airs on Zee TV.

Yami Gautam on 2 years of ‘Uri’: The film changed a lot of things for me

Mumbai– Uri: The Surgical Strike was released two years ago on this day and actress Yami Gautam went down memory lane to recall bringing alive her character of Pallavi Sharma, an undercover Intelligence Bureau agent.

“(It) Feels great looking back at Pallavi from ‘Uri’ today. It’s been two years today and for me it was this film that changed a lot of things, in me as an actor and how the audience and certain directors looked at me as an actor. (It’s) Not just the physical transformation but also the strength that the character held and the versatility I got to portray. In that short span and knowing that it’s going to be primarily about the operation, for me it was ‘Uri’ where it began all over once again for me — the kind of adulation I got from my first (Bollywood) film (‘Vicky Donor’ in 2012). So, (I am) forever in debt to Aditya, the audience, the Indian army and the entire team for making this film what it became,” Tami said.

Yami has lately been busy shooting for Bhoot Police. She will also be seen in the films A Thursday and Dasvi.

“A cricket team!” the actress replied when asked about how many children she would like.

“I do want children, as many as I can have. A cricket team? I’m not so sure,” she added.

The actress opened up about her hope for her future family ln an interview with The Sunday Times, reports usmagazine.com.

Priyanka got married to Nick in India in December 2018, just five months after getting engaged.

She also opened up about whether their different cultural backgrounds or age difference comes in between their relationship.

“Neither was a hurdle. Nick took to India like a fish to water. But just like a normal couple, you have to understand each other’s habits and what each other likes. So it’s more of an adventure than trying to figure out hurdles. None of it was really that hard,” she explained.

They discovered a new meaning of their relationship during the Covid pandemic.

“Quarantine gave us the ability to spend a lot of time together, which I’m really blessed by. Because with both of our careers it’s hard to find that kind of time,” she said.

Priyanka, 38, went on to praise her 28-year-old husband for supporting her.

“It’s so comforting to find a person who is in your corner. Whatever I may be in my professional life or how the world perceives me, I’m just a girl trying to live her life in the best way possible, and I’m so grateful to have a partner in doing that,” she shared.

Los Angeles– Actress Preity Zinta has revealed that several of her family members, including mother and brother, had tested positive for Covid sometime back.

The actress took to Instagram on Monday to share the update, saying that they all have tested negative now.

She shared that she felt “helpless and powerless” being away from them as they battled the illness, adding that she is grateful for their recovery.

Sharing a family photo, Preity wrote: “Three weeks ago my Mom, brother, his wife, kids & my uncle all tested positive for Covid. Suddenly terms like ventilators, ICU and oxygen machines took a new meaning. I felt helpless & powerless here in America, far away as he battled it out in the hospital.”

“I’m so grateful to the almighty and to all those wonderful doctors & nurses that worked tireless to take care of them. For all of you who don’t take Covid seriously please be warned that this can become dangerous overnight so please take care, wear a mask & practice social distancing. Today, after hearing that they have all tested negative I can finally fall asleep & stop stressing. Finally the New Year feels like a Happy New year. #Thankyou #Doctors #Nurses #Grateful #Ting,” she added. 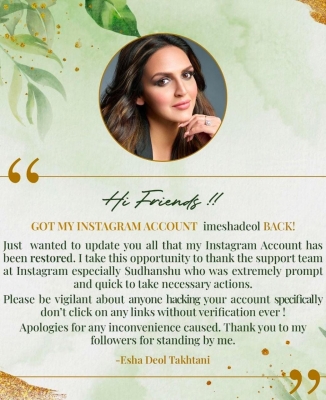 Esha shared a note on her verified Instagram account on Sunday evening announcing that her hacked account has been restored and at the same time warned netizens about falling prey to the trap laid by hackers.

“Hi friends
Just wanted to update you all that my Instagram Account has been restored. I take this opportunity to thank @imaritrads from my team & the support team @instagram especially @sudhanshu64541 who was extremely prompt and quick to take necessary actions. Please be vigilant about anyone hacking your account specifically don’t click on any links without verification ever ! Apologies for the inconvenience caused. Thank you to my Followers for standing by me,” the note by Esha reads.