Patna– Actress Neetu Chandra on Monday attended the Memorandum of Understanding (MoU) signing ceremony of the Bihar government with Tata Memorial Hospital concerning the availability of special aid for the cancer patients in Bihar. 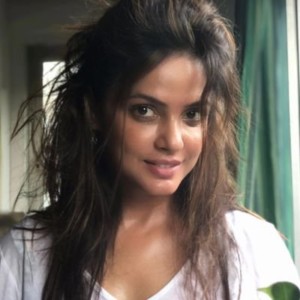 According to the signed MoU, an amount of Rs 1 lakh would be provided to the victim.

Proud to witness the collaboration, Neetu said in a statement: “It’s a wonderful initiative and I am so blessed to have witnessed this collaboration. I am delighted that 70 per cent to 80 per cent aid will be provided to patients from Bihar under the annual income of Rs 2.5 lakh.”

The “Garam Masala” star, who lost her father to Cancer six years ago, said that her “heart breaks when she sees people helpless”.

“Good health is a blessing and my heart breaks when I see people helpless and unable to afford medical attention,” she added.

Mumbai– Actress Jaya Bhattacharya, who is often seen creating awareness about the environment among the people, has now urged them to join the India Green & Wild movement.

Explaining the importance of the initiative, Jaya said in a statement: “Environment is the key for existence of life on the Earth. But there is drastic environment change due to global warming, excessive pollution, industrialisation etc. The environment is a gift from God and we need to conserve it for future.”

The “Kyunki Saas Bhi Kabhi Bahu Thi” actress feels that “it’s the responsibility of every citizen to save the Earth”. And to encourage people to extend support towards the environment, she has uploaded a short environmental video titled “The Time Machine” on Youtube.

Esha Gupta to feature in video of bold dance track

Mumbai– Actress Esha Gupta will feature in the music video of “Get dirty”, marking her first association with Raj Kundra, Manj Musik and Summit Mehra — co-owners of Muzik One Records, which will promote new talents.

The dance track’s production is done by Roshin Balu, vocals have been given by Gourov Dasgupta, along with newcomer Ishika Bakshi.

“The song has such a fresh energy because Muzik One Records is all about promoting new talents and fresh singers. I really enjoyed working with this label,” Esha said in a statement.

“It was fabulous grooving to the sexy vibe of this song. Once it’s out, every dance floor is surely going to get dirty. I think it’s going to be the number one dance track of the year,” she added.

The song is expected to be out on Friday.

Proud of my love Virat: Anushka on India’s maiden series win in Australia

Sydney– Actress Anushka Sharma is over the moon after the historic series win of the Indian cricket team in Australia. She says she is proud of her husband Virat Kohli, who led the team in the four match series that India claimed 2-1.

Anushka, the “proud” wife of Kohli took to Instagram to praise Indian team and her husband.

She wrote: “They came. They conquered. History written and created by this bunch.Huge congratulations to all players, coaching unit and support staff ; it takes undying perseverance and solid conviction to focus on what’s important and shut out the rest . So happy and proud of you my love Virat.”

I’d love to do a show in Pakistan: Vir Das

Mumbai– Actor-comedian Vir Das says he would love to do a show in Pakistan, adding he has never been offered one.

Vir on Sunday tweeted: “I am just going to put this out there because I get asked it a lot. Yes, I’d love to do a show in Pakistan. Never been offered one. And ironically, get told to go there everyday…mostly by my own people though.”

The “Delhi Belly” star keeps touring for stand-up shows across the globe.

He has received positive reviews for his latest Netflix stand-up comedy special “Losing It”, has bagged another project on the online streaming platform.

The yet untitled project would be Vir’s third project with Netflix. In 2017, he became the first Indian to have his own Netflix comedy show “Abroad Understanding”.

On the acting front, he will soon start shooting for the sequel of the 2013 zombie comedy film “Go Goa Gone”.

The film also stars Sunil Grover, Disha Patani, Tabu and Nora Fatehi, among others. It is slated for an Eid release in 2019.

Getting back into shape for my next film: Aamir Khan

Mumbai– Actor Aamir Khan, who keeps altering his looks according to what his films demand, says he is now on a strict diet to get in shape for a project.

Aamir interacted with the media at a Sunday brunch at Mia Cucina here.

Asked about how his usual Sunday brunch, he said: “Earlier, I used to do so many things but now I am on very strict diet for my new film. So, I have started getting back into shape.”

Refusing to disclose the name of the film for which he has started training, Aamir said: “I cannot tell you which one it is but it’s for my new film.”

He was out for a brunch with his daughter Ira Khan.