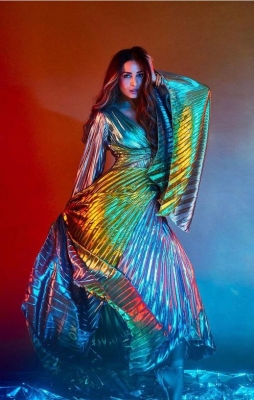 Malaika: Independence is at the ‘core of my being’

Mumbai– Actress Malaika Arora is going to be in the judge panel along with Terence Lewis and Geeta Kapur in the upcoming dance reality show ‘India’s Best Dancer’.

Malaika who herself is an actor, model, skilled dancer and a fitness enthusiast talks about why is it important for her to be an independent and a self sufficient woman.

“I believe independence is the core of my being! Moreover, in my line of work, I am very happy and fortunate to meet people who give me the right backing, the right push to do something,” says the actress.

She adds: “Before starting out anything new and unexplored, I don’t just go on a whim. I do a lot of research, I consult a lot of experts and understand where they are coming from and then I collaborate and associate with them. I am very headstrong like that. And, I think all women should be emotionally and financially independent.”

Mumbai– Actress Mithila Palkar has talked about her pure bond of friendship with her ‘Little Things’ co-actor Dhruv Sehgal. She says she has an amazing friendship off-screen with him that translates onto the screen.

Mithila said: “I always laugh when I get this question, people always assume we’re together or have been together in the past, and that’s not true. The reason we’re able to portray that so well on-screen is because Dhruv and I have an amazing friendship off-screen.”

Directed by Ruchir Arun and Pranjal Dua, the series’ fourth and final season is set to drop. ‘Little Things’ is a celebration of all the subtle things, the adulthood, the maturity and above all the little moments that truly make a relationship beautiful.

Talking more about her co-actor, she added: “We love to goof around and irritate each other and laugh a lot, and that’s a lot of what Dhruv and Kavya do as well. We’ve built a really strong bond over the years and have found our own explosive chemistry through playing Dhruv and Kavya and I’m so glad people love this relationship just as much as we do!”

Season 4 celebrates Dhruv and Kavya’s individuality and relationship as they grow together amidst their highs and lows. While they make the tricky transition from young love to a mature relationship, audiences will witness Dhruv and Kavya navigate questions around commitment, health, their ambitions and family.

Mumbai– Unlike many other Bollywood personalities, actress Richa Chadha has made her Twitter account private and even deleted the app from her phone as it is “too toxic”.

Richa, who currently has a following of 541.9K on the micro-blogging site appeared to be locked on Tuesday morning.

Richa on Tuesday morning announced on Twitter that she has deleted the micro-blogging app from her phone.

She wrote: “Deleting this app off of my phone. Takes too much, is toxic. Bye.”

The move comes after Richa, who is dating actor Ali Fazal, gave a befitting reply to a social media user on the platform who asked her when she was getting divorced.

According to a media report, a user had written to Richa in Hindi: “When are you getting divorced? Tell us. Because your marriage is not going to last long, just like Aamir Khan’s.”

To which, the actress replied in Hindi: “Sarvesh, forget about me, are you losing your mind because no one married you willingly? In your case, it must have been the girl who asked for dowry. Neither do you have looks nor intelligence and you are also poor? Your mother must have switched from LPG to an earthen stove.”

“My regards to you, aunty. What kind of s**t-like devil you have brought into this world? This unemployed, pitiable person can dare to speak only here.”

Richa and Ali have been dating for a long time. The two were all set to get married last year but the plan was postponed due to the coronavirus pandemic.

Aparshakti returns to radio after 6 years, calls it ‘ghar waapsi’

Mumbai– Actor Aparshakti Khurana is back on radio for a storytelling series titled ‘Ishq Mein Kabhi Kabhi’. He says it’s a “ghar waapsi” for him as he back on radio after almost six years.

Aparshakti, the younger brother of actor Ayushmann Khurrana, is hosting a new storytelling series on 104.8 Ishq FM titled ‘Ishq Mein Kabhi Kabhi’, which is a two-month-long series and will feature 24 stories on radio and six digital episodes over the next two months.

Aparshakti said: “It’s a ‘ghar waapsi’ for me as I am back on radio after almost 6 years, but jokes apart it’s such a special feeling to enter the same studio again. I’m really looking forward to voice these stories for the radio listeners.”

The series will see the actor take listeners through a rollercoaster of emotions exploring heartbreaks, puppy love, eternal love and second chances, among others.

On the acting front, Aparshakti is gearing up for his next titled ‘Hum Do Humare Do’, which also stars Rajkummar Rao, Paresh Rawal, Kriti Sanon and Ratna Pathak Shah.

Aishwarya shares picture of Big B, Aaradhya from his 79th b’day 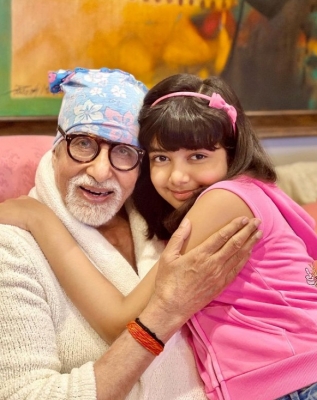 Just like every year, Aishwarya posted a picture of her father-in-law who is seen posing with his granddaughter Aaradhya. The two are hugging each other and smiling at the camera.

For the caption, Aishwarya wrote: “Happy happy birthday dearest darling Dadajii-Pa. Love you forever and beyond.”

Aishwarya along with her actor husband Abhishek Bachchan and daughter Aaradhya returned from their Paris-Dubai trip right in before Amitabh’s 79th birthday on Monday.

The cine icon took to his Instagram account to thank his fans and friends for their wishes.

He shared a picture of himself and wrote: “My gratitude for the love you give me .. I shall never be able to repay it .. nor shall I ever be able to fathom your affection…

“Your greetings today have been immense .. I cannot respond to all of them, but I do hold them close here and wish that you take this humble presence here on Instagram as my response ..” (IANS)