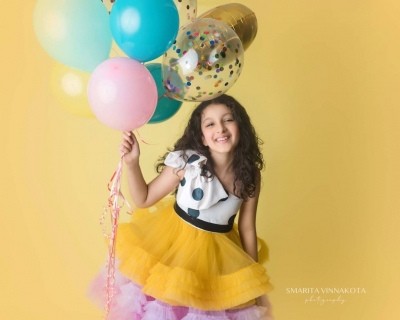 “Happy birthday, my little one!! Always lighting up my world. Happy 9! Love you more than you can imagine! #SitaraTurns9,” Mahesh wrote alongside the video.

Sitara’s mother Namrata Shirodkar too wished her. She posted a video of her daughter and captioned it: “9 years today! Watching you grow has been my greatest joy. Aim for the sky always! Love and more love to you. Happy birthday Sitara!! @sitaraghattamaneni.. Many blessings.”

The actress, who has worked with Mehra in the films “Delhi-6” and “Bhaag Milkha Bhaag”, uploaded a picture showing her holding the book along with an image from the set of “Delhi-6”.

She captioned: “#Firstlook Mehra is a great mentor for any actor in the industry. To see his zeal and vision translate onto the screen is truly magical! He’s now sharing his vision and journey with everyone through #TheStrangerInTheMirror. Here’s the first look of @rakeyshommehra’s autobiography. Releasing on 27th July, 2021.”

The autobiography’s foreword has been given by AR Rahman with whom the director has collaborated in films “Rang De Basnati” and “Delhi-6”.

The afterword of the book has been written by Aamir Khan with whom Mehra worked in the film “Rang De Basanti”.

Tanya Maniktala on how to deal with trolls

Mumbai– Actress Tanya Maniktala says she has figured out how to deal with trolls. She simply ignores them.

“Over time, I have realised that there is no absolute way of dealing with trolls. Personally, in my short social media existence, the way I cope with it is by ignoring it. You have to gradually learn to take it in good humour, make light of it, and not take it too personally,” said Tanya.

She does believe that a lot of good has come from the internet and its ability to break geographical boundaries.

“Social media always comes with a bad reputation but recently during the Covid situation in India, I’ve realised that when in the right hands it can be a powerful, brilliant tool,” she said.

Tanya will be seen in the upcoming web series “Chutzpah”, which also stars Varun Sharma, Manjot Singh, Gautam Mehra, Elnaaz Norouzi and Kshitij Chauhan amongst others.

Talking about the relevance the show has for the audience today, Tanya said: “The show takes you through how the internet is a vast jungle and how it plays such a vital role in our lives. Everyone connects with it differently -on one hand there is a long-distance relationship that a couple is holding onto and on the other hand you have internet trolls trying to take over the world.”

She added: “There are a lot of things which make the show very relatable and I am sure people would connect to a lot of different aspects that the social media world has to offer.”

Mumbai– Ayushmann Khurrana has given a glimpse of his latest musical obsession — a tank drum.

On Tuesday, the actor shared a video clip playing the tank drum on Instagram. He wrote of his love for the instrument and how it’s a divine sound that calms the actor on the set of “DoctorG”. He asked his followers to guess the tune he played on the drum

“This is my latest obsession. Early mornings. Late nights. Also in between shots. It’s called a Tank Drum. My best company in Bhopal. Makes me a calmer doc in this hot and humid central India. Produces a divine sound. Do you identify the song that I interspersed in the jam, from the film Sehra (1963), sung by Lata di. #Tankdrum #DoctorG #Bhopal,” wrote Ayushmann on Instagram.

The actor is seen playing the instrument shirtless.

The video received a lot of responses from his Bollywood friends and fans.

Nikhil Chinapa wrote: “Good morning, welcome to Nipples ‘R US. How may we be of service?”

The actor is currently shooting for his upcoming film “DoctorG” in Bhopal.

Tahira Kashyap does a recce of Chandigarh for upcoming film

Mumbai– Filmmaker Tahira Kashyap shared glimpses of her recce trip to Chandigarh for her upcoming film.

“Recce scenes! With the most amazing, talented and loveable team,” wrote Tahira on Instagram, tagging her team.

The pictures she shared are from a sports stadium ground.

Actor Ayushmaan Khurrana’s wife Tahira is an author and filmmaker. Recently, Tahira announced her upcoming book “The 7 Sins of Motherhood”.

In the past, she has penned books like “I Promise”, “Souled Out”, “Be Atmanirbhar”, “Cracking the code” and “12 commandments of being a woman”.

She has directed short films like “Pinni” in the anthology “Zindagi In Short”, “Sharma Ji Ki Beti” and “Toffee”.

The filmmaker’s short film “Quaranteen Crush” is set to release as part of the anthology web series “Feels Like Ishq” on OTT.

Shraddha Kapoor: ‘Ever since I was little, I have enjoyed seeing my father on screen’

Mumbai– Actress Shraddha Kapoor says ever since she was a kid, she has enjoyed watching her father Shakti Kapoor on screen.

Shakti Kapoor is all set to comeback in his popular avatar of Crime Master Gogo on a special OTT project. He had memorably essayed the role in the 1994 film “Andaaz Apna Apna”.

“Ever since I was little, I have enjoyed seeing my father on screen — totally in his element, adding his personal touch to characters that today have a massive cult-like following!” said Shraddha.

Shraddha calls it a learning process being on sets with her father. “Being on set with him is for the books. It’s so memorable to share screen space with my father and I am really excited to see how this unveils,” she said.