Mumbai– Actress Kangana Ranaut’s love for saris is well known. Recently, she made a public appearance wearing a plain cotton sari that cost Rs 600 only. 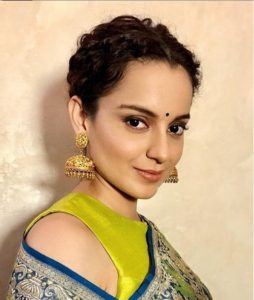 Kangana’s sister Rangoli Chandel, who is quite active on social media, took to Twitter and uploaded the photograph of Kangana in the particular sari, and described it in detail.

“On her way to Jaipur today Kangana is wearing Rs 600 sari she picked from Kolkata, she was shocked to know one can get such good organic cotton in this amount and it is heart breaking to see how hard our people work and how little they earn. Please support our own before international brands take away this also from them. Indian weavers,” tweeted Rangoli.

However, Rangoli’s tweet did not go down well with many social media users. More than the sari, many pointed at Kangana’s luxury handbag and trenchcoat in the photograph.

The men we see on screen have changed: Zoya Akhtar

Mumbai– Filmmaker Zoya Akhtar, who has helmed movies such as “Gully Boy” and “Dil Dhadakne Do”, says she tries to make movies she can watch.

“I was young and till then I had a certain perception of what constitutes as cinema. Till I watched ‘Salaam Bombay’. That switch that you can make what you want happened with that film. I try to make movies I can watch,” she said.

Akhtar, who was at the Indian film festival of Melbourne, also discussed how the representation of men and women on silver screen has changed over the years.

“The men who we see on screen have changed. Their stories and their characters are today far different. Look at Vicky Kaushal in ‘Raazi’, it was such a beautiful character. And the credit goes to Meghna for it, because she could write this part. We are trying to project men who we want to see on screens,” she pointed out.

“The characters you create have to go deeper than the surface. You have to show what’s not seen before. There has to be nuances. The idea is to create a psychology that will connect better with the audience,” she added.

Taapsee on Tuesday shared a post talking about the importance of sports in a student’s life and how several children don’t get the privilege.

In the image, Taapsee can be seen in a school uniform, sporting a two-braided pigtails, along with two schoolmates.

“Sports have been an integral part of my life. School race tracks became my war zone every year and thanks to a supportive family and encouraging school teachers I could have my moment of glory. Unfortunately, many kids don’t have that support system Why the gap.”
She captioned the image.

Soon, the actress’s “Mannmarziyaan” co-star Vicky Kaushal commented: “Pakka do chaar ko dhakka zaroor maara hoga (you must have definitely pushed four or five people).” Vicky was referring to the fact that in the pciture, Taapsee and the two other girls are on a podium, with the actress at the top spot.

To which, Taapsee replied: “Ji nahi! I am a very fair player! Look at that innocent face!”

Taapsee responded by saying: “Ha ha ha. School college sab theek tha life mein uske baad the competitions became TOO FAIR (Everything was fine in school and college but life after that became too fair)”.

Mumbai– Sonam Kapoor has joined the Bollywood bandwagon spreading awareness on childrens rights, as part of #WhyTheGap campaign promoted by Save The Children India.

The actress shared a group photo of her batch from her school days in Arya Vidya Mandir, Mumbai, and tweeted: “My school days were some of my happiest memories. I believe that education is the one path to true independence and freedom. We should all be asking #WhyTheGap and working towards #TheRightStart for every child.”

The actress believes every child should have the right start because true independence can be achieved with education, and she also nominated actors Arjun Kapoor, Swara Bhasker and Dulquer Salmaan to take up the challenge on Twitter.

Save the Children India, which works for underprivileged children, started the online campaign called #WhyTheGap to help spread awareness about the existing gaps in our society between the privileged and the underprivileged strata.

Stigma associated with rape should be abolished: Richa Chadha 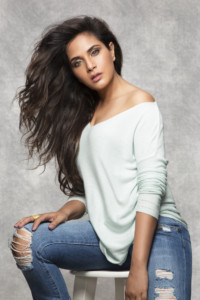 “There are myriad problems in India when it comes to reporting gender crimes. The statistic is worrying that rape cases often don’t get reported because of the social stigma attached to rape. The phrases used to describe rape are ‘izzat lootna’ or ‘naak katna’. There needs to be a multifaceted approach to fix this so we need to fix this on multiple levels. The society needs to be more aware. One wonders why cops are reluctant to register FIR. No law is made without context so after the Nirbhaya rape case there were amendments to the clauses of rape law. But to what extent is it followed and implemented is crucial to determine how successful rape law is. The conviction rate of rape in India is fairly high contrary to popular belief,” she said.

Richa will be seen essaying the role of a public prosecutor in the upcoming film “Section 375”. In the movie, she will fight to get justice for her client, who claims she was raped by a filmmaker (played by Rahul Bhatt), who is defended by Akshaye Khanna’s character in court.

“I don’t know whether my look is ‘chocolaty’ or ‘spicy’, I like myself in a beard as well as without beard. I am never conscious about my looks. Audiences look at how you look differently depending on the characters. Looks do matter in the entertainment industry but acting is not just about looks, it also involves expressions, eye contact, vibes and emotions,” Avinash said.

“I would love to do negative roles as they are more challenging and more performance-based. Negative characters make an actor explore different dimensions. A negative character, if he wins the hearts of the audience, lives longer in their memories,” he said.

Mumbai– Actor Jimmy sheirgill says he will play a challenging role inspired from a true story in “Rangbaaz Season 2”.

In its second season, “Rangbaaz” is back with another story of a gangster. The nine-episode series narrates the tale of a dream gone wrong. It is a fastpaced, crime thriller that encompasses caste politics in society and political rivalry of a gangster who was also referred to as ‘Robinhood’ by many.

“The script of ‘Rangbaaz Season 2’ is gritty and action-packed. It is a challenging role inspired from a true story. We started shooting early this month,” Jimmy said.

“Season 1 created a lot of noise and fan following. Our attempt with Season 2 is the same. It will soon premiere on ZEE5.”

Mishra added: “‘Rangbaaz Season 1’ was special as it was a story I had been wanting to write since 1998…. The audience and critics loved Season 1 and have been waiting eagerly for Season 2.

Mumbai– Actor Rajeev Khandelwal says he loves to cook, but doesnt like to take help from cookery shows or online tips.

“I love to cook but I don’t like to follow recipes or Google them. My wife is a huge fan of cookery shows but I could never understand her love for such shows. I enter the kitchen and make something from the ingredients available and sometimes it turns out really nice,” Rajeev said.

“I believe you need creativity to cook and there is a technique to it. It’s not at all an easy job,” he added.

He will be playing a chef in ALTBalaji’s web series “Coldd Lassi aur Chicken Masala”.

On his tryst with kitchen and cooking, the actor said:””My dad was in the Army and was usually posted at borders. We were three brothers but I would be the one helping my mom in the kitchen. I would make tea for her or make chapattis as she was the last one to eat at home. This is how I actually learned cooking”” (IANS)