How Janhvi Kapoor reacted to idea of ‘work from home’

Mumbai– Bollywood actress Janhvi Kapoor doesn’t seem to like the concept of working from home very much, going by a new post on social media.

Janhvi posted a string of pictures on Instagram, sitting in front of a laptop and looking disinterested. She weras a thick jackeyt and sips on her drink.

“Work from home they said. It’ll be fun they said,” she wrote as the caption.

The actress was last seen in the digitally-released film “Gunjan Saxena: The Kargil Girl”.

She will next feature in “Good Luck Jerry”, which has begun shooting in Punjab. Directed by Sidharth Sengupta and written by Pankaj Matta, the film also stars Deepak Dobriyal, Meeta Vashishth, Neeraj Sood and Sushant Singh. Her other films lined up are “Roohi Afzana” and “Dostana 2”.

Sonam posted a couple of pictures on instagram earlier on Wednesday, and then a video of the same sequence.

Of the two pictures she posted, the first is a close-up, but it is the second that catches your attention. It is a long shot taken on a street. She rests against a convertible dressed in a beige overcoat and grey suit. A hand holds a huge umbrella above her.

“Sorry RiRi, no one can stand under my umbrella… Need to maintain safe distance!” she wrote as caption.

With another couple of pictures, in the same dress, she earlier wrote: “I love throwing on an oversized jacket and painting the town red… you can definitely coat me on that!”

Sonam has started to shoot for “Blind” in Glasgow, Scotland. The film will have a start to finish schedule. The action thriller is directed by Shome Makhija, and revolves around a blind police officer who is in search of a serial killer.

Subuhii Joshi: I am lazy when it comes to dressing up

Mumbai– Actor Subuhii Joshi, who became popular playing Poonam Maheshwari in the show Yeh Un Dino Ki Baat Hai, says fashion for her is always about being comfortable. However, she reveals when it comes to dressing up she feels lazy.

“Fashion for me is being comfortable in whatever clothes I am wearing, and whatever I can carry with confidence. My comfort clothes would be wearing a long loose oversized T-shirt with shorts and flip flops. I am not someone who wants to dress up all the time. I am very lazy when it comes to dressing up,” Subuhii tells IANS.

As an actor, being in the public eye can make fashion quite a task, she says.

“Fashion trends change every year and every season and, of course, it is exhausting because as an actor you have to take care of a lot of things. We need to think even before repeating our clothes so it is exhausting

However, she has no qualms in picking up a role with a contrasting fashion choice. “I think I am okay picking up a character whose fashion sense is completely opposite to my look because I am okay carrying any type of clothes. When it comes to acting, we have to do a lot of things where we are going out of our comfort zone. In daily life, I would not do that but on screen it’s fine,” she says.

Neha Bhasin: What’s the use of being an artiste if I don’t have a distinct voice?

Mumbai– Singer Neha Bhasin believes that artistes should have a distinct voice and they should lead the way instead of being ‘people pleasers’ and trends. Rather, a singer should set a trend said Neha, who recently released the music video Tu ki jaane.

The song and its video try tracing an unusual bond between a broken heart and the bare body.

“I think in a patriarchal society, since childhood we are told to dress in a certain manner and we are told that we should feel conscious of our body. But why should I feel ashamed of my body, why should I not celebrate my womanhood? I have been a major victim of cyber-bullying like all those women who are unabashed and self-assured about themselves,” she told IANS.

The singer added: “I know that I do not have the numbers when it comes to followers on social media that many of my contemporaries have because I do not want to be a pleaser. You know I am an artiste, and being an artiste if I do not have a distinct voice, if I am not leading the way, how am I utilising the power of my voice? When I am saying voice, I am not just talking about my ability to sing, but having an opinion on things that matter to us, to the society.” 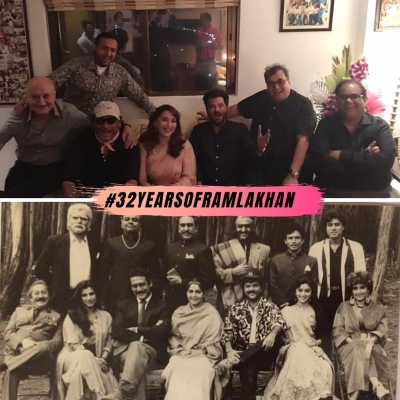 The 1989 film, which starred Jackie Shroff and Anil Kapoor as brothers, was directed by Subhash Ghai.

Sharing a collage of two photos of the film’s team, she tweeted: “Celebrating #32YearsOfRamLakhan & the wonderful memories we made while working on the film. Thank you for watching, enjoying & loving the hard work of the entire team.”

The first photo features Madhuri, Anil, Jackie, Ghai, Anupam Kher, Satish Kaushik and Gulshan Grover. The other image seems to have been taken during the shoot of the film. The black and white photo features actors Dimple Kapadia, Rakhee, Amrish Puri, Saeed Jaffrey and Paresh Rawal, who were part of the film’s cast.

When Alia Bhatt took a different sort of ‘flight’

Mumbai– Bollywood actress Alia Bhatt went into daydream mode amid a conversation, going by her post on social media.

Alia posted a picture on Instagram on Wednesday. In the image, she is seen looking away from the camera and thinking about something with a smile on her face.

“Took a flight mid convo,” she wrote as the caption.

Alia will next be seen in the first installment of director Ayan Mukerji’s superhero adventure trilogy Brahmastra. In the film, Alia stars alongside rumoured boyfriend Ranbir Kapoor, along with Amitabh Bachchan, Nagarjuna and Mouni Roy.

The actress also stars in Sanjay Leela Bhansali’s Gangubai Kathiawadi, a film reportedly revolving around the life of a brothel owner and matriarch.

Yami Gautam traces her journey from TVC to films

Mumbai– Bollywood actress Yami Gautam has walked down memory lane and reminisced about her journey from her television commercial days to her current stint in Hindi cinema.

Yami posted a throwback picture on Instagram where she can be seen shooting for a TVC as a background artiste while sharing screen space with actress Asin Thottumkal. Yami is draped in a saree.

“Feel nothing short of happiness looking at this picture. It was my birthday and I remember my mother sitting at far away and watching me work since early morning,” she wrote.

“I walked up to Mummy, who has always encouraged me at every step, for her feedback & she said keep learning and working hard everyday this way, you are doing very well. It was such a beautiful time,” she added.

Meanwhile, Yami on Wednesday shared the news that she has wrapped up shooting for her forthcoming horror comedy flick Bhoot Police.

“And it’s a wrap. #BhootPolice,” the actress captioned a photo on Instagram where she cuts a cake.