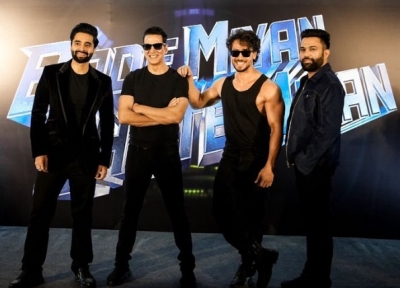 Mumbai– Actor-producer Jackky Bhagnani, whose film ‘Bade Miyaan Chote Miyaan’ will see Malayalam superstar Prithviraj Sukumaran giving a new twist to the story, recently opened up on the decision to cast Prithviraj for the part.

He said, “We completely believe in inclusive cinema and Prithiviraj adds a lot of credibility to the film. He represents the Southern film industry in a big way and with him coming on board, it makes ‘Bade Miyaan Chote Miyaan’, a bilingual film in the true sense.”

“I think the audience will really enjoy Akshay Sir, Tiger, and Prithviraj’s combination together under the direction of Ali Abbas Zafar,” he added.

‘Bade Miyaan Chote Miyaan’, which also stars Akshay Kumar and Tiger Shroff, is produced by Pooja Entertainment, and will release in 2023.

Mumbai– While it was ‘Naatu Naatu’ that made a lot of noise with its Oscars nomination, another song ‘Applause’ from the film ‘Tell it Like a Woman’ is also competing against the global phenomenon in the Best Original Song category. 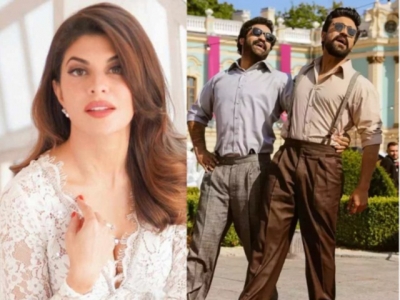 Bollywood actress Jacqueline Fernandez, who also stars in the film, recently shared her happiness with the track earning the nomination.

The song titled ‘Applause’ has been penned by singer Diane Warren, a recipient of 13 Oscar nominations and spreads the message of strength and empowerment.

Excited with the Oscar nomination, Jacqueline said, “I am so proud of the entire team of ‘Tell It Like A Woman’ and especially Dianne and Sofia who created such magical music with ‘Applause’. The whole experience of doing this film was just as magical for me.”

She further mentioned, “Being associated with this Oscar nomination is just so special, I cannot express it because it is very overwhelming and I wish the best to the whole team for the Academy Awards!”

‘Tell it Like a Woman’ is an anthology of films made by eight female directors from around the world. Margherita Buy, Eva Longoria, Cara Delevingne, Anne Watanabe, Jennifer Hudson, Marcia Gay Harden and Jacqueline Fernandez are just a few of the ensemble cast members in the film.

The actress also took to her social media to express her joy and excitement as she congratulated the fellow contenders.

Sharing a creative of the nomination list, she wrote in the caption, “Beyond words right now. Congratulations to @dianewarren @sofiacarson for the Oscar nomination for ‘Applause’ and making us all proud! It was an honour to be associated with this beautiful film ‘Tell It Like a Woman’ alongside such esteemed artists! Also big congratulations to Team ‘RRR’ for ‘Naatu Naatu’ nomination!!! My best wishes and love to the entire team and all the nominees.” 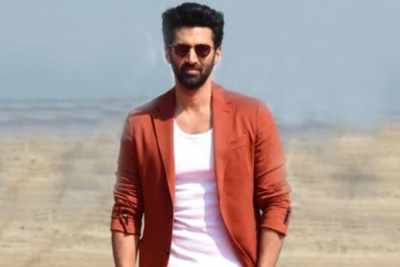 He shared: “The story was set across five years, and five different emotional stages for our character. Shaan’s character is the longest arc of the story. He starts with ‘The Night Manager’ in Dhaka, to Shimla, he goes to Sri Lanka, he goes through so much, eventually the climax.”

Sandeep, who is known for ‘Aarya’, ‘The Lottery’,and ‘Neerja’, added further how challenging it was to give him different looks that goes well with the storyline of the series.

“We decided to go with three looks for him, he’s clean shaven, he’s bearded, he has stubble. So it was tough trying to figure out how to manage each look because each look required 5-7 days to prep right.”

“Once you get him clean shaven, it will require 14 days to come back to a bearded look so it was a tough production call but creatively we took it and it is wonderful on screen,” he concluded.

Mumbai– Laqshay Kapoor, who made his Bollywood singing debut with the song ‘Mera Banega Tu’ in the Vijay Deverakonda and Ananya Panday-starrer film ‘Liger’ last year, is all set to collaborate with the playback singer Shreya Ghoshal for the song, ‘Sohnneyaa’. 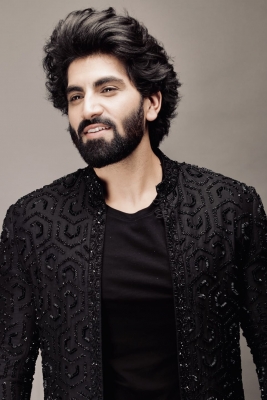 Sharing his excitement about getting an opportunity to sing along with Shreya, he said: “Life has indeed come a full circle. Having participated in the singing reality show as a kid years ago, I never ever expected to be standing right next to the music legend Shreya Ghoshal and record a song with her. After the reality show stint, I put off from music for some time, as I got busy setting up my business but at the same time I also learnt music professionally to make my craft better.”

The singer further shared about getting his latest project and how it was all unexpected for him. “Little did I anticipate that years later, I will be called by Dharma Productions as they curate a song with the music label VYRL wherein I will be singing a song along with Shreya Ghoshal. From a contestant to a co-singer, life has certainly come a full circle. I am happy that Shreya ma’am praised the song ‘Sohnneyaa’, my voice and the music video also,” added Laqshay known for his singles like ‘Tumhe Pyaar Karunga’.

Mumbai– Bollywood actor Suniel Shetty, who is in a happy place with the marriage of his daughter Athiya Shetty to the Indian cricketer K.L. Rahul, recently took to his Instagram to share his happiness with his followers as he shared a picture of the newly-wed couple from the ceremony that took place on January 23 at his farmhouse in Khandala. 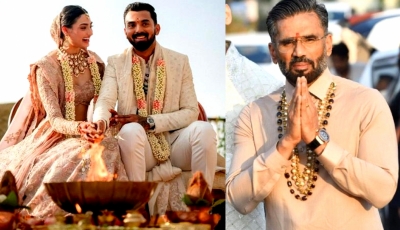 He wrote in the caption, “A hand to hold and a reason to believe because sometimes the right place is a person and the ingredients love and trust … congratulations and Godbless my bachchas @athiyashetty @klrahul.”

Suniel’s friends from the fraternity also congratulated him for his daughter’s wedding.

Athiya and K.L. Rahul first met through a mutual friend and instantly got along. Sparks flew and the two started dating but kept their personal lives private.

Fans finally got a whiff of their romance when designer Vikram Phadnis teased Athiya about the same on social media.