Hrithik Roshan reiterates his love for dance in new post

Hrithik shared a string of pictures of his performance at an award event.

For caption, the actor wrote: “I love dancing.”

On the work front, Hrithik will reportedly play the lead in an Indian adaptation of the popular English series “The Night Manager”. He will play an Indian version of the Jonathan Pine character, essayed by Tom Hiddleston in the original 2016 limited series based on the 1993 novel by John Le Carre.

The Indian adaptation will start shooting in Mumbai in April.

Arjun Bijlani: What matters is how meaty your character is

Mumbai– Actor Arjun Bijlani, who has worked in television, music videos, films and the digital space, feels being the lead in a project no longer matters. What matters is how meaty your character is.

“With changing times, content consumption has also changed immensely. Today it’s not about being the main lead, hero or the heroine as it happened earlier in television and films. What matters now is how meaty your character is,” Arjun told IANS.

He added: “Be it big or small, if it’s good, then the audience ends up liking your work. For me, the transition has been great. I’ve learnt a lot and grown a lot through these years.”

“This was something new for me but I was really excited to present it. I’m glad it all worked out,” he said about his music video experience.

Mumbai– Actress Jacqueline Fernandez shared with fans on Tuesday that she has commenced the shoot of her forthcoming film “Ram Setu”. 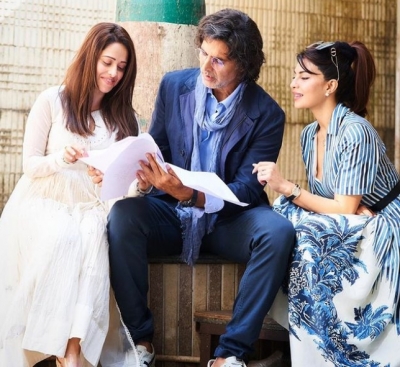 The actress took to Instagram to post a picture from the set, where she is seen discussing the script with co-stars Akshay Kumar and Nushrratt Bharuccha.

She captioned: “Ram Setu filming begins today. Keep us in your prayers. ”

Akshay and Nushrratt, too, updated fans about the start of shoot.

The mahurat shot of the film took place on Ayodhya recently. “Ram Setu” is directed by Abhishek Sharma. A major portion of the film will be shot in Mumbai.

Aahana Kumra: In films only superstars call the shots

Mumbai– Actress Aahana Kumra, who plays the female lead in the upcoming web series “The Honeymooner”, has her theory on why actors like her are getting their due in the digital space than in Bollywood.

“The web space is giving all characters their due. It is no longer the norm to have young girls, whose only prerequisite is to look good, as leads. Plus, let’s face it, in films only the superstars call the shots. (The) Digital (medium) also gives you freedom to tell whatever the hell you want to say. Actors like me, who were not getting their due earlier, have got a fresh lease of life courtesy this emerging medium,” she said.

The show also features Tanuj Virwani, and tells the story of a husband-wife relationship.

“When director Madhur Agarwal, who I have known from college, approached me with the subject, I loved the concept and said yes immediately,” Aahana shared.

The show will drop on Digiflix TV.

Mumbai– Actress Kriti Sanon is craving for chocolates at wake-up time, going by her new post on social media.

Kriti posted a picture on Instagram of a chocolate coloured, layered dress paired with a green bralette.

On the work front, the actress has a slew of films coming up, including Bachchan Pandey, Bhediya, Mimi, Ganpath, Hum Do Hamare Do and Adipurush. (IANS)