In the image, she is seen taking a mirror selfie in a bathroom. She sports purple boy-shorts paired with a T-shirt rolled up to showcase her toned abs.

She captioned the image with a basket emoji.

In November, Esha and Mallika Sherawat opened up on the importance of veganism, and the need to spread awareness regarding a plant-based diet rather than kill animals for food.

On the work front, Esha was last seen as a police officer in the web series “REJCTX2”.

Mumbai– Bollywood actress Taapsee Pannu on Wednesday offered glimpses of the gruelling training regime she had to go through for her forthcoming film Rashmi Rocket.

Taapsee shared a video on her verified Instagram account where she is seen trying to catch her breath while running on the tracks, and then working out in the gym.

In the video, Taapsee says: “It was painful. Third day of shoot… I felt my body could not take it anymore. I just could not run anymore. I had to stop the shoot for a while to just be able to walk. For this film I needed to hit the gym and hit the gym real bad.”

The actress wrote along with her video: “As I finish the last athletic training today for #RashmiRocket here’s the journey I was waiting to share with you all….Or rather a glimpse of it. If it makes you curious then the transformation was worth it. The full journey tomorrow.”

Taapsee has been into heavy workout over the past months for her role of a runner in Rashmi Rocket. She plays a runner from the Rann of Kutch who fights for her identity and becomes an athlete. Priyanshu Painyuli plays Taapsee’s husband in the Akarsh Khurana directorial.

Alia Bhatt goes back in black

Mumbai– Actress Janhvi Kapoor has been hunting for a whiff of glamour in her album of throwback pictures, going by her new social media post.

The actress took to Instagram to share a glammed-up picture from her album, writing: “#tb because I’m not feeling so glam these dayz.”

In the image, Janhvi wears a soft pink top. She opts for rose gold-toned eyes, with glossy pink lips and rosy cheeks. Curly hair falls over her shoulder.

Hewr fans have loved the picture. A user wrote “super hot”, while another commented: “gorgeous”.

A fan commented: “Beautiful girl”, while another shared “super gorgeous girl with lots of glamour.”

The actress was last seen in “Gunjan Saxena: The Kargil Girl”, and will next be seen in films such as “RoohiAfza” “Takht” and “Dostana 2”.

Mumbai– Actress Alaya F. has revealed what she would do if she gets a skirt with tassels, and her revelation is quite hilarious. 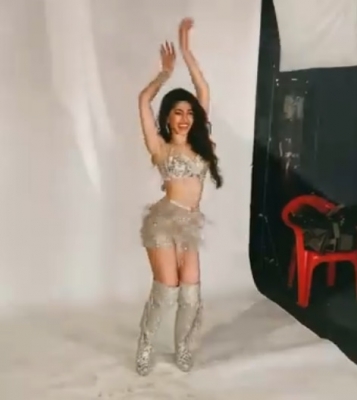 Alaya posted a video on Instagram where she is seen wearing a silver bralette paired and a skirt with tassels,. She completes her ensemble with silver knee-length boots. In the clip, she is seen moving her waists.

“Give me a skirt with tassels and this is all I’ll do, literally non stop,” she captioned the post.

Alaya on December 1 informed fans that she has a lot of exciting things coming up.

Raveena Tandon thanks her Instafam on crossing 5 million mark

Mumbai– Actress Raveena Tandon’s following on Instagram has crossed the five million mark. Expressing joy and gratitude, Raveena mentioned her follower count is organic, and hence she is growing slowly.

Raveena posted a video on her verified Instagram account where she can be seen jumping on the snow. “That’s called Jumping in joy!!! #5M love you all!” she captioned the video.

In another post, the actress shared: “And we grow .. #instafamily slowly, organically but stronger and surely.”

Raveena has been spending quality time in Himachal Pradesh lately, where she is shooting for an upcoming project, and her Instagram account bears testimony to how much she is enjoying her time in the scenic mountain state.

The actress, who is accompanied by her children, has been sharing photographs of snow clad mountains from Manali, Kothi and other locations on Instagram for quite a while now.

Tisca Chopra takes a dig at China over Covid pandemic

Mumbai– Actress-filmmaker Tisca Chopra on Wednesday took a sarcastic jibe at the Chinese for allegedly creating the coronavirus, which turned into a pandemic this year.

“Will 2021 be a better year? That depends on what the Chinese are eating now #JustSaying #2021,” Tisca tweeted from her verified account early on Wednesday.

In a separate tweet, the actress shared a cartoon that shows vaccines raining from the sky on common people who are waiting for it eagerly. The cartoon reads: “Welcome 2021”.

Tisca keeps reminding netizens from time to time of their responsibility towards themselves and others amid the pandemic. The actress had recently shared a post on Instagram taking a dig at people who keep their mask dangling over their chin. She wrote with sarcasm: “Breaking news! #Covid19 in India has mutated to a form that no longer affects you through the mouth and nose, it enters through your chin.. #ChinCorona is very dangerous, make sure to always wear your masks on your chins. These gentlemen got the above memo.. for the rest of us, who are we kidding??! If you are wearing a mask (as you should) then wear it the right way. #Seriously #MaskUp #MaskOnChin #ChinCorona.” (IANS)