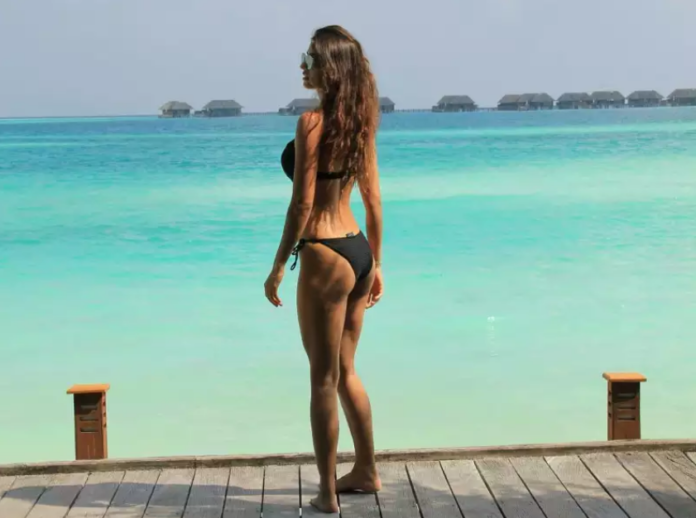 Disha Patani all smiles as she returns to work

Mumbai– Actress Disha Patani gave a glimpse of her vanity van as she resumed work amidst the pandemic.

Disha took to Instagram on Thursday and shared a video of her getting ready for a shoot. She wrote: “Finally we’re back.”

She didn’t mention the name of the project, but it is said that she was working for a brand shoot.

Meanwhile, Disha has been following a strenuous workout regime during lockdown, as she prepares for her role in the Salman Khan-starrer, “Radhe”.

She also has “Ek Villain 2” coming up, which reunite her with “Malang” director Mohit Suri.

Taapsee Pannu goes hiking in the outskirts of Jaipur

New Delhi– Actress Taapsee Pannu, who is currently in Jaipur, recently explored the outskirts of the Pink City while hiking.

Taking to Instagram, Taapsee wrote: “Coz all we actually need is some peace, smile and a deep fresh breath! #HeadUp #ClimbUp”

Along with it, she posted a picture where she poses against the backdrop of the picturesque Aravalli range.

Reacting to the post, a user asked her the name of the place. To this, Taapsee commented: “Outskirts of Jaipur”.

Earlier, Taapsee had shared a selfie on her Instagram story and captioned it: “The glow of hiking”.

On the work front, Taapsee will be seen in “Haseen Dillruba” , “Shabaash Mithu” and “Rashmi Rocket”.

Kartik Aaryan is looking for the person who first ate a bat!

Mumbai– Bollywood actor Kartik Aaryan is on the lookout for the person who first ate a bat, going by his social media post.

Kartik took to Instagram and shared a selfie. In the picture, the actor is seen sporting a Batman T-shirt and pulling off a designer scowl at the camera.

His allusion of course is to the belief that the coronavirus spread from bats to humans, and was transmitted into a human who must have eaten a bat that was infect with the virus.

On the film front, Kartik will next be seen in “Dostana 2” and “Bhool Bhulaiyaa 2”.

Mumbai– Bollywood actress Kangana Ranaut continues with her vitriolic verbal attacks on colleagues in the film industry. On Thursday evening, she referred to Sonam Kapoor as a mafia bimbo for supporting arrested actress Rhea Chakraborty, who she referred to as a small time druggie.

“All of sudden mafia bimbos have started to seek justice for Rhea ji through my house tragedy, my fight is for people don’t compare my struggles to a small time druggie who was living off a vulnerable and broken, self made super star, stop this right away,” tweeted Kangana from her verified account on Thursday evening.

Kangana’s tweet in the wake of a news piece that talks of Bollywood actress Sonam Kapoor reacting to the news of Kangana’s office demolition by the BMC by calling it an “eye for an eye”.

On Thursday morning, actress Dia Mirza tweeted: “Condemn the demolition of Kangana’s office. Condemn the harassment and abuse against Rhea. This is not about taking sides. This is about calling out what is unjust. Remember this could happen to you.”

Reacting to the tweet, Sonam had shared Mahatma Gandhi’s quote on Twitter: “An eye for an eye makes the whole world blind.”

Sonakshi Sinha on 10 years in B’wood: Hard work sustained me

Mumbai– Actress Sonakshi Sinha on Thursday completed a decade in Bollywood, and she says she is grateful for every film and every experience — good or bad.

“10 years and counting… I can’t believe it’s been 10 whole years since i first appeared on the silver screen. I remember being so unsure if this is really what i even wanted to do… but you know what erased all that doubt? The love I received from all of YOU,” Sonakshi wrote on Instagram.

“Your love encouraged me, your criticism pushed me to do better. My hard work sustained me, and my respect for my work nudged me forward. My enthusiasm on set aided me, my hunger to learn propelled me. Here I am, 10 years down the line, so grateful for every film, every experience – good or bad, every person i have ever worked with! Thank you! Thank you to this industry, thank you to my audience, and thank you universe! This is just the beginning,” she added.

The actress also shared a short clip of the roles she has played in her career.

Sonakshi, daughter of actor-turned-politician Shatrughan Sinha and Poonam Sinha, entered Bollywood with Salman Khan’s “Dabangg”, which released on September 10 in 2010.

After making a successful debut with “Dabangg”, she went on to star in films like “Rowdy Rathore”, “Lootera”, “Holiday: A Soldier Is Never Off Duty”, “Akira”, “Noor”, “Force 2”, besides two sequels in the “Dabangg” series. (IANS)