Disha Patani recalls what’s it like to work with Salman, Prabhu Deva

Mumbai– Bollywood actress Disha Patani who was seen as ‘Diya’ in ‘Radhe: Your Most Wanted Bhai’ opposite Salman Khan recalls working with him and Prabhu Deva in it.

She played the role of Jackie Shroff’s (Abhyankar) sister. She appeared to be a fun-loving girl and the amusing banter between Salman Khan and Disha Patani were quite entertaining.

Disha says: “I feel very lucky that I got the chance to work with Salman Sir once again. He makes you feel so comfortable that you don’t realise you are working with a super star. I used to admire him for how he does everything with such an ease.”

The movie revolves around ‘Radhe’ played by Salman Khan who is an encounter specialist of Mumbai Police force. Randeep Hooda is shown as ‘Rana’, a gangster and a murderer. The move is directed by Prabhu Deva.

She adds: “This was also the first time I was working with Prabhu Sir and he was so supportive and clear about how exactly the steps and scenes should look. ‘Radhe’ has given me memories and experiences that I will always cherish. And I’m excited to be sharing this experience with audiences.”

‘Radhe: Your Most Wanted Bhai’ will premiere on &pictures on September 26 at 12:30pm.

Mumbai– Actor Gaurav Amlani has been playing the role of ‘Khanderao’ in ‘Punyashlok Ahilyabai’. For him this role is full of challenges as he has to work on his body language and diction.

Gaurav shared about his training regime and says: “To essay a character like ‘Khanderao Holkar’, one has to keep a lot of things in mind, especially the posture, the body language, and the diction. It was critical for me to undertake training in horse riding and sword fighting which are both physically challenging but rewarding as well. Horse riding has helped me in building my core muscles in addition to the back and chest muscles.”

“Sword aided my posture and balance. I’ve been training since last month and I am happy with the results. As an actor, it’s my duty to do full justice to the character I portray and I hope I put my best foot forward as ‘Khanderao Holkar’. Needless to say, I have to convey a heartfelt gratitude to all my tutors and action directors for their expert guidance and support,” adds the actor who has worked in films and has experience in theatrical acting also.

The show ‘Punyashlok Ahilyabai’ is based on the iconic story of the legendary queen Ahilyabai Holkar who managed to defy all odds and battle the societal norms in the 18th century with the support of her father-in-law ‘Malhar Rao’.

Mumbai– Actor Ankur Bhatia’s role as Ibrahim Parkar in the 2017 film ‘Haseena Parkar’ got many people to notice him. As the film completes four years of release, the actor goes down memory lane.

Ankur played the role of Ibrahim Parkar, the husband of Haseena Parkar (played by Shraddha Kapoor).

“‘Haseena Parkar’ was my first film as a lead actor and so it holds a very special place in my heart. Time has flown by since its release and I had a beautiful time shooting with Shraddha, Siddhant and my mentor Apoorva Lakhia. Even after four years, I still get a lot of messages from people over social media, who have loved the movie and my performance as Ibrahim Parkar, and I can’t thank them enough for their love and appreciation,” Ankur tells IANS.

Ankur will soon be seen in the second season of the crime thriller series ‘Aarya’ alongside Sushmita Sen and in the action thriller ‘Crackdown’ Season 2 in which he will be continuing his role as Tarik from the first season of the show.

Mumbai– Actress Sapna Thakur, who plays the role of Kuldeep’s girlfriend Samaira in the daily soap ‘Kyun Rishton Mein Katti Batti’, is all set to surprise audiences with a new look she will be donning in the show.

Sapna will appear in the avatar of a domestic help for a special sequence in the show.

Talking about the same, Sapna shared: “When I got to know I am going to get into a maid’s disguise for Kyun Rishton Mein Katti Batti, I was very thrilled as I got to experiment even more with my character. I must say that this look was quite different from Samiara’s look.”

Throwing light on her look and preparation, the actress added: “I was looking completely distinct with the mole on my face and a simple saree, and I must add that I enjoyed performing the scene. I also worked extremely hard on my voice modulation and postures to fit the bill. I am very happy that the show has given me a chance to experiment a lot with the character.”

Mumbai– Bollywood star Deepika Padukone has posted a motley of pictures from her badminton session with world champion P.V. Sindhu.

The pictures have left social media users wondering if a biopic is being made on Sindhu. 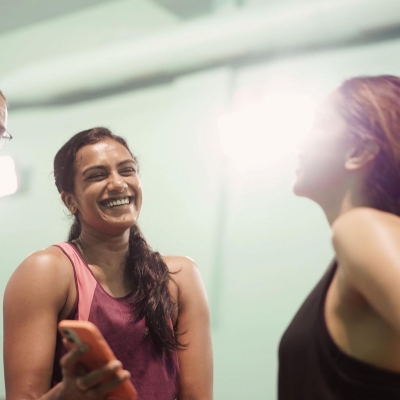 Deepika posted the set of pictures on Instagram. In the images, the two are seen playing an intense game of badminton on an indoor court.

“Just a regular day in my life…Burning calories with @pvsindhu1!” the actress, who is the daughter of former badminton player Prakash Padukone, captioned the image.

The picture currently has 1.9 million likes. Deepika’s husband and actor Ranveer Singh dropped a comment on the photograph.

Many social media users reacted to the picture on the comment section.

One wrote: “Lgta h biopic bnne vli h (seems like a biopic is being made).”

“That means i was right, we are getting the PV SINDHU BIOPIC,” wrote another.

One heaped praises on Deepika and Sindhu.

The user said: “Two idols in one pic.”

A user questioned: “Is there a biopic on the wayyy?”

One added: “R u began prep for sindhu’s biopic!” (IANS)