Mumbai– TV actress Disha Parmar is playing the character of a self-made woman in the show ‘Bade Achhe Lagte Hain 2’.

She is the one who believes that women don’t need to depend on men for their basic requirements.

According to her they are independent and strong enough to deal with any adverse situation. Disha says she connects with on-screen personality ‘Priya’ and feels that women are inherently multi-taskers and they can balance their personal and professional lives very well.

Sharing more on the same, Disha said: “I personally believe that women are inherently more patient and organized. They can multi-task with ease. Women usually have a natural habit of going above and beyond to ensure that everything is taken care of – be it her work space or responsibilities at home.”

“Moreover, the way we juggle between work life and home life by making it look so effortless, says a lot about how good we are at it,” she added.

Hyderabad– With Nagarjuna Akkineni, Naga Chaitanya, Ramya Krishna, and Krithi Shetty in the lead roles, the much-anticipated movie ‘Bangarraju’ is in the news.

With father-son duo of Nagarjuna and Naga Chaitanya on the screen, this movie is expected to entertain the fans during Sankranthi.

Krithi Shetty, who allured the Telugu audience in the recent blockbuster movie ‘Uppena’, is all set to star opposite Naga Chaitanya in ‘Bangarraju’. The makers unveiled the first look poster of the actress earlier on Thursday.

Krithi Shetty looks apt in a village belle avatar, wearing a bottle-green outfit. As her role is named ‘Naga Lakshmi’, she is seen wearing a rose garland and seen waving at the people who are assembled in front of her. The poster also suggests that Krithi is being felicitated, as the people around her shower flowers and garland her.

Lakshmi Manchu on her Malayalam debut with Mohanlal in ‘Monster’

Hyderabad– Lakshmi Manchu is all set to foray into Malayalam movies and she says “stepping into Mollywood is not the biggest news, but sharing the screen with Mohanlal is.”

Lakshmi’s Malayalam debut is to bring her together with superstar Mohanlal in his much-anticipated ‘Monster’. Lakshmi, who is an actress and a producer, shares her excitement, as she starts shooting for the movie.

Helmed by Vyshak, ‘Monster’ is to unveil multiple layers of Lakshmi as the role demands. The ‘Gundello Godari’ actress shares how she prepped for the role.

“I had a hint of what the role is, but only got a grip on the idiosyncrasy after shooting for a couple of days. It took me a while to discover the depth and the interwoven layers of the role I have to play in ‘Monster'”, Lakshmi said.

On being quizzed about how Lakshmi manages with the language, she confidently replies that she is determined to do anything for the role she wants to play.

“I am an artistic killer. If you rope me in for a Korean movie, I will speak Korean. Though I have watched Malayalam movies all my life, I must admit that I am not familiar, which doesn’t sum up that I cannot cope up with it. I am giving my best anyways,” Lakshmi said.

Lakshmi talks about her small and big wars with her father Manchu Mohan Babu, as she narrates, “I always have these kinds of arguments with my father, where he calls me a working woman, to which I disagree. I ask him – When your sons are working too, why specifically call me a working woman when you do not mention them as working men? This argument is endless. But, my father is always supportive of the work I do”.

Manushi Chhillar reveals why November is her luckiest month

New Delhi–Former beauty queen and debutante Manushi Chhillar, who is all set to play princess Sanyogita in the Akshay Kumar-starrer ‘Prithviraj’, is ecstatic that the teaser of the upcoming film dropped in November, which she considers her luckiest month.

Manushi said: “November has always been my lucky month. So, it is an amazing coincidence that the teaser of my debut film Prithviraj has also happened in the same month, in fact just a few days before I was crowned Miss World on November 18 in 2017.”

She added: “While I’m nostalgic about my achievement in 2017, I’m also very excited for my launch and the journey that lies ahead of me. November will forever be special in my life. I’m feeling emotional, elated, thrilled, nervous, curious – all at the same time because I have waited for this moment for over a year.”

Manushi has been paired opposite superstar Akshay in ‘Prithviraj’ and she hopes that she will make her parents proud with her performance.

“I’m extremely positive about ‘Prithviraj’ and I know that it will entertain audiences worldwide with a story of iconic love, legendary valour and unflinching courage. I hope I can make my family proud with my work and I’m looking forward to their reaction when they get to see my film.”

Rani Mukerji: Ecstatic to be able to reprise the same character I did 15 years back

New Delhi– Actress Rani Mukerji says she never knew that she would be able to do a sequel to the 2005 film ‘Buntry Aur Babli’ and is ecstatic to be able to reprise the same character she played over 15 years back. 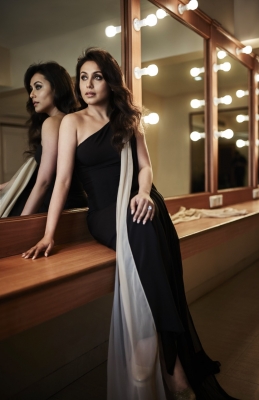 Rani said: “‘Bunty Aur Babli 2’ script when it came to me, It was quite a pleasant surprise for me because I never knew that we would ever be able to do a sequel of ‘Bunty Aur Babli 1’, there were talks about this film right from the start when we released ‘Bunty Aur Babli 1’ but the script could never be cracked all these years, finally after so many years when I was approached with the script I was just so ecstatic to be able to reprise the same character which I did more than 15 years back.”

She added that her character Babli to her has been one of the characters who has a great spirit and is super entertaining.

Rani said: “She is somebody who I would personally like to be friends with. I think she has a zest for life and believes in living life to the fullest and is very positive about her own life and her surroundings.”

Talking about what makes her character also special, Rani said that “she is somebody who never takes anything to heart and she overcomes difficult times with a lot of positivity and enthusiasm. I think there is something to learn from her character, even as a person I think we need more Babli’s in the world.” (IANS)