Agra– Struggling for life, acid attack survivor Bala has found a new hope as star actor Deepika Padukone has extended a helping hand to save her life.

The acid attack survivor, who is suffering from a life-threatening kidney ailment, urgently needs a kidney transplant to survive. After the word reached Deepika, she donated a generous amount of Rs 15,00,000 to the ‘Save Bala’ campaign.

Bala is a real-life star who was also featured in the Deepika Padukone-starrer movie ‘Chhapaak’, directed by Meghna Gulzar, besides appearing on ‘The Kapil Sharm Show’.

Her condition is deteriorating every day due to the failure of both her kidneys and she’s somehow surviving on dialysis. Being an acid attack survivor, her weakened immunity is already a threat to her life.

Bala still requires further monetary help to come out of this tragedy and hence the Chhanv Foundation is seeking as much support as possible.

The fundraising campaign called ‘Save Bala’ has been started on the crowdfunding platform ‘Milaap’.

Mumbai– After several rounds of international festivals, ‘The Miniaturist of Junagadh’, a short film starring Naseeruddin Shah and Rasika Dugal, is being screened at the Bangalore International Short Film Festival, which concludes on September 5.

Talking about the film, Rasika said, “I’ve always found the medium of short films interestingly challenging. To be able to tell a story in a short time requires cinematic acumen and a strong sense of detail. As an actor, I thrive on those tiny details which don’t attract attention to themselves and might even seem inconsequential but go a long way in creating the world of the story. Kaushal has told a riveting story in a beautifully gentle way. This is a special film for me as it gave me the opportunity to act alongside Naseer Saab, who was my teacher at FTII. So, I got to be a student again!”

The film is directed by Kaushal Oza.

Now the film is in India to regale its homegrown audiences. Set in 1947, it follows the unravelling of a secret about a beautiful miniature collection that a family is determined to keep.

Zareen lashes out at paparazzi on ‘heartless’ treatment of Shehnaaz

Mumbai– As a video surfaced on social media which shows how Shehnaaz Gill, the rumoured girlfriend of late Sidharth Shukla, and her brother Shehbaaz are followed and pushed around as a crying Shehnaaz runs after Sidharth’s hearse, actress Zareen Khan said such behaviour from the paparazzi is “heartless”.

Reacting to the video, Zareen said, “My heart goes out to Shehnaaz, the poor girl looks completely broken. And at such a sensitive time, the media should show a little empathy towards her rather than behaving like heartless robots. I saw videos were she’s crying uncontrollably but the media is just pushing her and shoving cameras and mikes on her face for a byte for their benefit. The whole scenario is compelling and heartbreaking! When did humans turn so heartless?”

Sidharth and Shehnaaz, even though they never officially announced themselves as a couple, always remained very emotionally close to each other.

Sidharth passed away on Thursday at the age of 40 after suffering a massive cardiac arrest. His mortal remains were taken to Cooper Hospital. The last rites of the actor took place at the Oshiwara crematorium.

Mumbai– Actress Neetu Singh Kapoor has revealed why she retired from Bollywood at an early age, on ‘The Kapil Sharma Show’.

The mother-daughter duo of Neetu Singh Kapoor and Riddhima Kapoor Sahani will be the special guests and they will be revealing their life’s extraordinary moments.

When Kapil asked Neetu if she wished to do movies first or marriage to which the actress revealed: “I had nothing against fame because I was a superstar as in when I used to move out from my balcony, there were around 300–400 people standing and cheering baby Sonia. So, to be famous was not a big thing and then Rishi Kapoor came into my life who wanted my time, and due to which it was a bit chaotic to handle both films and Rishi, so I gave up on films.”

“As I wanted to rest because I had worked for 15 years in which I used to study, shoot and more. So, it was too hectic in these 15 years of struggle. I married at age 20 and later in a year Riddhima was born that’s why we are friends,” she concluded.

Mumbai– Rapper Mika Singh has stepped in for Farah Khan on ‘Zee Comedy Show’ for two weeks starting September 11 as Farah has tested positive for Covid-19. 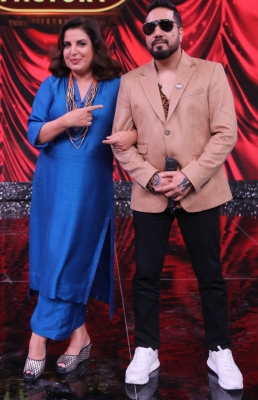 Mika has shot for two episodes with Raveena Tandon and Mallika Sherawat as well this week, but he was missing Farah beside him during the shoot.

Mika revealed: “It is unfortunate that Farah tested positive despite being double vaccinated and it clearly proves that you cannot predict anything in the current scenario. I have spoken to her, and it is great to know that she is doing fine, and I really hope she gets well soon. Last time around, I shot for ‘Zee Comedy Show’ as a special guest, and I really had a gala time with Farah, so I do miss her beside me.”

“But as you know, the show must go on and with an aim to spread cheer and joy amongst the audience in this gloomy time, we have shot for two episodes with Raveena Tandon and Mallika Sherawat. All the comedians made us laugh out loud and I hope everyone enjoys my presence on the show for two weeks. I will entertain everyone with my music and my witty comments, and I hope they shower the same amount of love on me too.”

Mumbai– Punjabi actor and singer Jassie Gill, who is playing the male protagonist in the upcoming film ‘Kya Meri Sonam Gupta Bewafa Hai’, says he feels fortunate to be part of the film and work with late actress Surekha Sikri.

“I am truly honoured and blessed to have worked with Surekha ji. I do not come from a family who had connections in Bollywood or the Punjabi film industry, so whatever I have learned is from these renowned people, be it Bollywood Or my Punjabi films.

“The strength and dedication Surekha ji had is inspiring. She was on a wheelchair, didn’t speak much, but she still had the energy and the passion for her art. She also used to dance on my songs while on the sets. She had shared a video with me too which I do watch at times. I still wish to have watched the film with her in the theatre,” said Jassie.

This was the last film of Surekha Sikri before she passed away on July 16.