Mumbai– Arshi Khan, who was recently seen on “Bigg Boss 14”, has fulfilled her dream of buying a flat in Mumbai.

Arshi reveals she had planned to buy a house in Mumbai before last year but then lockdown happened. “I was in talk to buy the property for a long time. I booked it in 2019 but then in 2020 Covid happened. I was not that strong financially at that point, and with no work I was literally stressed about how I would arrange the sum,” she recalled.

Her luck, however, turned for the better. “Luckily my movies happened then, besides OTT shows. ‘Bigg Boss’ was a great help. I was literally risking everything to buy a house here in Mumbai, just to make my dream come true,” she said.

“I feel my dream has been fulfilled by the blessings of God and my parents. It was God who gave me the fortune to do Bigg Boss this year. I remember being approached for the show last to last year, but unfortunately things did not fall in place. So, I am in a happy place now,” she added.

“I always had a dream to own a house in Mumbai for a long time now. I was living on rent. I also own a flat in Bhopal, and a farmhouse there. But having a dream house in Mumbai was like buying a flat on the moon, and but I am living it!” Arshi signed off.

Why Aahana Kumra was surprised by Madhur Bhandarkar

Mumbai– Actress Aahana Kumra wrapped up Madhur Bhandarkar’s “India Lockdown” on Tuesday, and she says she had a very different idea of how he was as a person till before working with him.

“When I signed the film, I thought Madhur Bhandarkar would be a serious person but he is just the opposite! On sets he is fun, and really keeps you entertained. He keeps the entire set happy and I think the happy vibe got the film to complete so quickly and on time,” Aahana told IANS.

She added: “It’s his positive energy that exuberates on set and is infectious. I am very happy to have collaborated with him and I am very excited to see how ‘India Lockdown’ is finally going to turn out.”

Aahana, who will also be seen in the short film “Happy Birthday” along with actor Anupam Kher, took to Twitter on Tuesday to announce the wrap of “India Lockdown”. She uploaded a picture of the entire team.

She captioned the picture as” “And it’s officially a wrap for #indialockdown ! What an incredible experience and the oh so entertaining @imbhandarkar sir! You’re truly a #jalwa.”

Parineeti Chopra: ‘Saina’ was the challenge I was looking for

Mumbai– Actress Parnieeti Chopra says the forthcoming sports biopic “Saina” was the challenge she was looking for because she was doing similar roles for a long time.

“I was looking for a challenge. The kind of films I was doing, they were more or less extensions of me, or perhaps what writers and directors thought of me. They were writing roles that were similar and I was choosing films that were similar. When this movie, Saina, came into my life, I was exactly looking for a film like this,” said Parineeti.

Earlier, actress Shraddha Kapoor was roped in to essay the role of badminton ace Saina Nehwal in the biopic. Shraddha reportedly dropped out owing to her health condition.

Talking about being trolled on social media after the teaser release, Parineeti said: “I have a different thought process. If I believe that someone is making a genuine point, I tend to agree with them. But when I know that someone is just heckling and saying stuff just to say stuff, I just ignore them.”

Mumbai– Bollywood actress Vaani Kapoor posted a glamorous picture for her fans on Instagram, on Tuesday. The actress poses in a yellow cutout ensemble.

“Imagine your cells as billions of stars sparkling inside you… let ‘em shine,” she wrote with the picture.

The actress has three films coming up in the next months. She will be seen in Bell Bottom, co-starring Akshay Kumar and shot in Glasgow, Scotland during lockdown. She is has Shamshera featuring Sanjay Dutt and Ranbir Kapoor, and directed by Karan Malhortra. Vaani will also be seen in Chandigarh Kare Aashiqui where she shares screen space with Ayushmann Khurrana for the first time.

Mumbai– Actresss Urvashi Rautela plays a Lucknowi character in an upcoming web series, and she is working hard to get the accent of her character right. 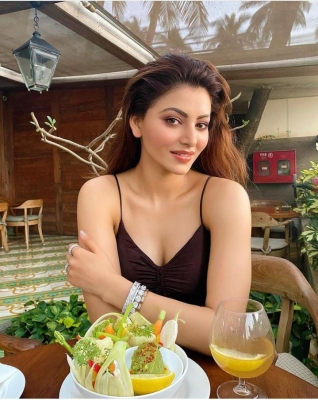 Urvashi plays Poonam Mishra, wife of supercop, Inspector Avinash Mishra, in the show “Inspector Avinash”. The series is based on the life of Inspector Mishra and has Randeep Hooda essaying the title role.

“Accents are important to know who you are where you are from as a character. I got a lot of help from my vocal coach and dialect specialist. Movie accents are the ones you don’t really notice but actually are considered the foundation of the characters. For the very first time, I will be speaking in a Lucknowi accent. It’s a challenging part for me,” said Urvashi.

Besides the accent, Urvashi has also been spending time with Poonam to understand her day-to-day routine and lifestyle.

“I am hanging out with Poonam Mishra to grasp everything about her. Even the smallest thing about hers, which I can grab, will be super best for my role. Basically, I am soaking in all her characteristics — from the way she talks to her dressing style, her bangles, sarees, everything,” said Urvashi.

Mumbai– Actor Anupam Kher on Tuesday informed his fans about getting vaccinated with the first dose of Covid-19. The actor posted the update on Twitter. 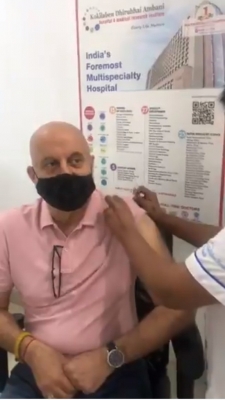 Anupam Kher uploaded a video that has him getting vaccinated at a medical facility, and thanked the medical staff and government of India for the vaccination.

“Got my #COVID19 first dose vaccination!! Thank you all the doctors, medical staff, scientist and Govt. Of India for making it possible. India Rocks. Jai Ho!” Kher’s caption read.

The actor celebrated turning 66 with school children, and he will soon be seen in the short film along with Aahana Kumra, titled “Happy Birthday”. He has also wrapped up the shoot of his portions in the upcoming film, “The Kashmir Files”.

Recently, he shocked fans when he uploaded a picture on his social media in a get-up that made him look completely different. He teased his fans with the caption: “”Duality is not a story. Duality is just a complexity. Something exciting, something complex coming your way! Watch out for this space! #Actor #ActorsLife #NewBegining #Movie,” he captioned the pictures.” (IANS)