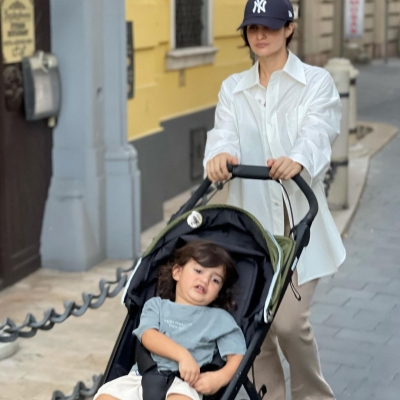 Mumbai– Actor Arjun Rampal took to social media on Wednesday to share photographs of his girlfriend Gabriella Demetriades wearing his shirt. In the photos shared on Instagram, Gabriella can be seen walking down a street with her son Arik in a pram.

“When she borrows my shirt to take our son out for a stroll,” Arjun wrote along with the photos.

The actor is currently on a holiday in Budapest along with Gabriella and their son.

Informing about the trip, Arjun recently shared in an Instagram post: “Some quality time with the family. Before i get to work.”

On the work front, Arjun features as the antagonist Rudraveer in the upcoming film “Dhaakad” also starring Kangana Ranaut in the lead. The actor recently coloured his hair in platinum blonde shade to look the part.

Apart from the spy thriller “Dhaakad”, Arjun will also feature in the historical drama “The Battle Of Bhima Koregaon”

Mumbai– Raveena Tandon took to Instagram on Wednesday to share photographs showing the actress all set for a virtual appearance.

The actress is currently on a trip to Madhya Pradesh’s Bandhavgarh Tiger Reserve with her family. In the photographs, she is dressed in a white shirt and a pair of denims with her hair left open. The actress is seen clicking selfies in front of a mirror in the photos.

“Checking out the look ! Before a virtual appearance from the midst of the jungle, had to go kilometres out to get good network. It’s such bliss actually to be cut off!” Raveena wrote

On the work front, the actress is all set to make her digital debut with the series “Aranyak”. The series created by Rohan Sippy also features Parambrata Chattopadhyay.

The crime drama narrates the story of two cops who are on a mission to find a missing tourist and revive the myth of a bloodthirsty entity in the forest.

Ayushmann Khurrana misses being on stage

Mumbai– Actor-singer Ayushmann Khurrana misses being on stage. The actor posted a long video clip of his stage performances as a singer on Wednesday to share his sentiment with fans on Instagram.

“Miss this! When are we going to experience this togetherness again? #Giglife @ayushmannbhava.” he wrote, tagging his Instagram page that features his performances of music gigs and concerts on stage.

The video clip shows Ayushmann’s stage performances on his hit songs and his interaction with the audience.

Thirtysix-year-old Ayushmann’s Instagram flooded with comments from family and friends.

Actress Prachee Shah Paandya resonated with his video and wrote: “That feeling of being on stage.”

Mumbai– Actress Ananya Panday took on Instagram on Wednesday and announced a campaign titled “Social Media For Social Good”, on the occasion of Social Media Day.

The actress uploaded a video on Instagram and addressed her followers, saying: “Hope y’all are doing well and taking all the necessary precautions. I want to applaud all those people who have used social media constructively for social good. I will be interacting with some of these social media heroes with So Positive’s new series.”

The actress, who will soon be seen in “Liger” alongside Vijay Deverakonda, feels it is important to focus on positive things in life during the time of pandemic.

She wrote as caption: “We often talk about the negative side of social media — the bullying, trolling and hatred. During the pandemic, I saw the power of people on social media — the humanity. Strangers helping strangers, sharing resources and information, saving lives. It reinforced my belief in kindness, compassion and empathy. ‘Social Media For Social Good’ is a series in which I’m going to be talking to some of the ‘Heroes’ of social media who have used it positively and constructively for the good of society! Social media can be a kinder place.” (IANS)