The actor even took to social media and shared his excitement for the song.

He posted a video with the caption, “Hooked on to this new song by @fentirostudio. Love the comic style vibe of the music video. Can easily be your party anthem for 2022!”

Talking about the song, the ‘Ishaqzaade’ actor said, “‘Fentiro’ is the perfect party track and I have to admit that I have been playing it on loop. It’s really cool to know how well this song has been tracking with people. Given how groovy it is, it is no surprise that Fentiro has hooked the youth of the country.”

“Fentiro – The Reason” has an infectious tune and swaggering beats that will have its listeners grooving to it from dusk to dawn. This song also features an English rap and it marks the studio’s foray into the global party music segment. The studio will continue to release more international party songs in 2022.

Commenting on the launch of this song, Sajay Moolankodan, Founder of Fentiro Studio said, “Everyone needs a reason to feel happy during these hard times. Our objective with this song is to create something transcendent and that can be enjoyed by a global audience, whether it’s on the dance floor or at home.”

He added, “Also, we have not taken the conventional music video route, instead we have created an exciting comic style video which ensures to put a smile on viewers’ faces. Fentiro Studio’s ethos is to create songs from India for the world to enjoy and we are excited to have our song launched by Bollywood star Arjun Kapoor.”

‘Fentiro – The Reason’ comes from the house of Fentiro Studio, an independent music studio based in Goa and Mumbai. The song is available to stream across all globally popular music streaming platforms.

Mumbai– Actress Shilpa Shetty, who is currently seen in the reality show ‘India’s Got Talent’ as a judge, got teary-eyed on seeing a performance by a sand artist named Nitish Bharti.

An emotional Shilp said after seeing the act: “Even in my life, I worship my mother and I really believe that I am who I am because of her and I have been able to achieve all that I could because of her. You are very inspirational Nitish and so is your act.”

He showcased his talent with a sand art depicting a mother-son relationship and the struggle and hard work women go through with a smile on their face.

Bharti, uses his mothers name Bharti instead of his father’s name. He narrates the difficulties that he faced when he dropped his father’s name and he showcased this beautifully in his performance through the sand-art.

All the four judges — Shilpa, Badshah, Manoj Muntashir and Kirron Kher, had tears in their eyes and gave him a standing ovation for his unique talent.

Nitish Bharti was one of the very few deserving contestants who got a ‘Hunar Salam’ and a golden buzzer from Judge Shilpa Shetty.

Nitish Bharti will now directly compete with the Top 16 best talents of India in the semi-finale.

‘India’s Got Talent’ is on Sony Entertainment Television.

After his character, Inspector Robert D’Costa, received a good response in ‘Race 1’, Anil Kapoor was seen slipping into his skin once again. Also known as RD, Anil’s character is a smart policeman, accompanied by a secretary who is portrayed as dim-witted.

Anil said: “‘Race 2’ is a special movie for me and has always been close to my heart. Completing nine years of the film brings back some fun memories from the shoot. Congratulations to the entire team behind the massive success of the film!”

Anil gave us an impactful performance with some on-point hilarious moments. He was also the narrator for the film.

While the background score for the film was done by Salim-Sulaiman, the music album was a creation by Pritam and Honey Singh.

Ranveer Singh: Want to be the first at trying something that hasn’t been done before

Mumbai– Bollywood livewire star Ranveer Singh, who will next be seen in films such as ‘Jayeshbhai Jordaar’, ‘Cirkus’ and ‘Rocky Aur Rani Ki Prem Kahani’, reveals that he wants to be the first at trying something path-breaking and be the best actor of the country. 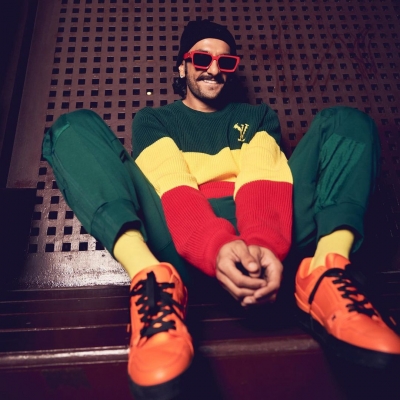 Ranveer said: “Right now I am becoming obsessed with this craft. I want to play more with it and want to explore more, so yes right now its burning like a blazing inferno wanting to do more and see what the possibilities are. Do things that haven’t been done before.”

“There was a very dear, very respected and admired colleague of mine who after 83 pointed out that if you are analysed – there is no reference for you actually. A mainstream leading man of Hindi cinema doesn’t really go this distinctively into different characters and then you have this off-screen persona that also has no reference.”

Ranveer shared: “So, I think I am doing something that I may not have done before and therefore I am achieving what I want to achieve which is doing things which haven’t been done before.”

The actor says this is a journey of exploring this craft.

“Let me be the first of trying something that hasn’t been tried before because I’m now deeply attached to the process which is the ultimate prize.”

After Ranveer completed a decade in cinema, he felt like he knew nothing about the craft and needed to explore himself.

He says: “I really have evolved as a person and as an artist. Initially I was very cocky. I used to think I know it all and I am invincible. Now, over the period of time, as I started doing more work and started collaborating with more people like Mr Bhansali, who break you down.”

“They’ll completely decimate these constructs that you’ve made for yourself thinking that these are the boundaries of acting. It’s after gaining a certain amount of experience that I realised that performance art, craft of acting is limitless and infinite. There is no extent of how you can transform yourself into another character.”

Ranveer added: “It’s now 10 years down the line that I feel like I don’t know anything. That I have barely scratched the surface of the potential of this. With every film, with every collaborator, with every passing year, I continue more and more and I have realised that there is no end to even learning.”

“There is no end to exploring the possibilities of this realm – performance art and the craft of acting. It is limitless, you can just about do anything.”

Talking about his ‘creative appetite’, Ranveer said: “I am like ravenous. I want to see how deep this rabbit hole goes and keep doing more of the same. And I am probably at the hungriest right now.”

“It’s like 10 years of work you might feel let’s pull your foot off the pedal, maybe live life a little, create the work-life balance. But right now, I feel I’m just starting and I’m hungry for more.” (IANS)