Anupam Kher gets nostalgic ahead of completing 37 years in Bollywood

Mumbai– Actor Anupam Kher posted the opening credit of his debut film “Saaransh” on his Instagram page on Monday, sharing that he will complete 37 years in the film industry on Tuesday.

The 1984 film directed by Mahesh Bhatt brought acclaim to Kher for his performance.

The actor posted the video on Instagram and captioned it as: “Even today when I see my name in the opening titles of my first film #Saaransh as introducing #AnupamKher I get choked with emotions. Can’t believe that tomorrow, 25th I will complete 37 years in cinema. Wah! God has really been kind!! #1DayToGo for my 37th birthday in movies! More tomorrow.”

The actor was recently seen in short film “Happy Birthday”. He often posts entertaining content on his Instagram for his followers.

In a set of four images, Karishma is dressed in a tie-dye T-shirt paired with blue denims. In one of the photos, she sits on the edge of a sofa, playing with her hair.

“Lockdown Pose,” she wrote as caption.

Mumbai– Actress Lauren Gottlieb took to Instagram on Monday, to announce that she has been working on new projects. However, the actress did not give out details.

She posted a series of pictures in a bodycon dress. She teamed the dress with stilettos and left her hair open.

“Hey You! Sorry I was missing this week — been working on some fun new projects!!! So while you wait patiently for my new releases, I’ll just drop these photos right here if you spam them with your love, support, saves, and shares, then I promise YOU I will post the hottest photos of this look — the decision is yours,” she wrote.

Lauren made her Bollywood debut with “ABCD: Any Body Can Dance” in 2013. She was also seen in the sequel “ABCD 2” as well as the film “Ambarsariya”, and essayed a special appearance in the films “Welcome Back”, “Detective Byomkesh Bakshy!” and “Welcome 2 Karachi”.

Armaan Malik thanks Twitter for helping him connect with fans

Mumbai– Singer Armaan Malik celebrated 10 years on Twitter on Monday, thanking the microblogging platform for helping him connect with fans.

“I joined Twitter in May 2011. Just can’t believe it’s been 10 years since my first tweet! This also happens to be the place where it all began for me and my #Armaanians! So thankful to @Twitter for making this connection between us stronger every day,” Armaan tweeted on Monday.

Expressing his respect for musicians releasing songs amid the pandemic, the 25-year-old singer wrote in a separate tweet: “I have immense respect for every musician who in these times is putting together a song and releasing it. It’s not easy at all.”

On the work front, Armaan collaborated with Korean-American singer-songwriter Eric Nam and international music producer KSHMR for a single titled “Echo”, which released on Friday. The track highlights indecisiveness in a relationship that pushes partners off the edge. 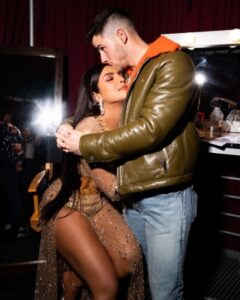 Priyanka was one of the presenters at the Billboard Music Awards while her husband performed at the music awards and hosted the ceremony. According to Page Six, Nick is recovering from a cracked rib injury and the actress stepped in to help her husband and agreed to be a presenter at BBMAs.

The actress took to Instagram to post pictures from the red carpet. Priyanka wore a thigh-high slit gown with a plunging neckline and a custom Dolce Gabbana ensemble. She teamed the golden ensemble with a thick belt and Bulgari jewels. Nick donned a designer number from Fendi.

Priyanka shared a picture of Nick hugging her at the awards. She wrote: “Husband appreciation post. Not even a cracked rib can stop this force of nature. So proud of you baby. With everything you do! Your work ethic, your pursuit of excellence! You inspire me everyday! Crushed it today! I love you so much!”

When Sunny Leone’s ‘army’ battled to zip her up

Mumbai– Sunny Leone uploaded a funny video on her social media page, where her team struggles to fit her into a beautiful yellow gown.The video is from the set of her reality show “MTV Splitsvilla”, and Sunny is getting ready for a shot.

In the clip, four people from her team struggle to zip her up in the dress.As everyone tries their hand at zipping her up, Sunny captioned the Instagram video saying: “Takes an army to make a gown look perfect.”

On the work front, the actress will soon be seen in “Shero”. The film is directed by Sreejith Vijayan and is scheduled to be released in Tamil, Hindi, Telugu and Malayalam.The actress is all set to make her digital debut with the web series “Anamika”, helmed by Vikram Bhatt. (IANS)