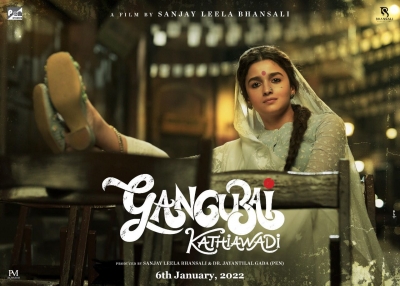 Mumbai– Actress Alia Bhatt’s much-awaited film ‘Gangubai Kathiawadi’ is all set to release on the big screen on January 6 next year.

Alia took to Instagram, where she shared the poster of the film, which is directed by Sanjay Leela Bhansali. The film also stars Ajay Devgn.

“Bringing to you a part of my heart & soul, #GangubaiKathiawadireleasing in cinemas near you on 6th January, 2022,” she wrote as the caption.

‘Gangubai Kathiawadi’ is inspired by the life of Gangubai Kothewali, ‘madam’ of a brothel in Mumbai’s Kamathipura, and is based on a chapter of Hussain Zaidi’s book ‘Mafia Queens Of Mumbai’.

Mumbai– Popular television actress Kajal Pisal, who battled Covid-19 in April this year, says she almost saw her death during her ailment and calls it her rebirth. 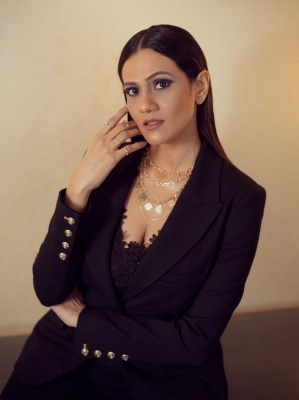 Talking about the same, Kajal said: “I was almost on my death bed during my battle with Covid-19. My recovery was just some unbelievable miracle that happened because of the prayers my family and well-wishers did for me.”

Post her recovery, Kajal decided to give herself a makeover. The actress plans to resume work very soon.

“I’m healthy now and see it as a rebirth. I have given myself a new glam look. I hope to return back to screen very soon,” she said.

On the work front, Kajal has featured in TV shows like ‘Bade Achhe Lagte Hain’, ‘Saath Nibhaana Saathiya’ and ‘Naagin 5’, among others.

She was last seen in the television show ‘Durga – Mata Ki Chhaya’.

Mumbai– Sunil Shetty is all set to make his OTT debut with the web series ‘Invisible Woman’.

Talking about his digital debut, Shetty said, “A web series today must have something to set it apart from the barrage of narratives that already exist, and the story of ‘Invisible Woman’ immediately captured my attention.”

‘Invisible Woman’ is currently going on floors and will be the first of many series that Yoodlee Films will announce in the coming months.

Shetty added, “I am very happy to collaborate with Yoodlee to bring ‘Invisible Woman’ to life and to make my debut in a web series as unique as this.”

The production house has experience in the OTT space with 17 feature films and has produced movies like ‘Ajji’, ‘Hamid’, ‘Comedy Couple’ and ‘Axone’, to name a few.

“Yoodlee Films has revelled in creating engaging narratives that don’t toe the conventional line. Now we take the leap into the world of webseries – a space that we have been itching to get into, given how consumption patterns of consumers have seen a tectonic shift to binge-watching web-series from all over.

Mumbai– Bollywood veteran Jackie Shroff is all set to lend his support to the upcoming ‘The All Living Things Environmental Film Festival’ that brings compelling environmental narratives to its audience.

This is the second edition of the festival that is taking place in Panchgani.

Talking about the festival, Jackie said, “Let there be more such films from the whole globe, everyone is concerned about the environment, let us educate through films. And hence it’s important to wish luck and congratulate the team of ALT EFF for such a great initiative. It is a great medium of education of survival and sustainability. Let’s educate ourselves and our kids through such fine films at such a festival that talks about the basics of the forest, the water, the air, the food and the soil”.

Set to take place between October 9 and October 17, ALT EFF is back in 2021 with a compelling and entertaining lineup of environmental films overseen by a distinguished jury and advisory team of the festival. The event holds 44 films, carefully divided into 10 film bundles: Drive-Thru Shorts, Activision, Midnight Tails, What’s On Your Plate?, Sapling Stories (Kids Friendly), Flux & Form, A Chasm of Hope, New Voices, Deep Dive Features, and Programmer’s Choice – representing a total of 31 countries and showcasing 33 India premieres.

Emphasising on the initiative, wildlife filmmaker Mike Pandey said, “Environmental festivals like ALT EFF, bring environmental issues to the forefront and offer viable solutions. They motivate and empower us to take the right step and attempt to make a difference to restore the beauty and sustainability of our only home, this planet we call Earth.”

He adds “Festivals like ALT EFF, play a crucial role in communicating and sensitizing people, helping them develop a sense of respect for the environment through films. It is what you respect, that you love and protect.”

Mumbai– Singer Tulsi Kumar has collaborated with Darshan Raval for a new song ‘Tera Naam’ that keeps the vibe of the wedding season in mind. 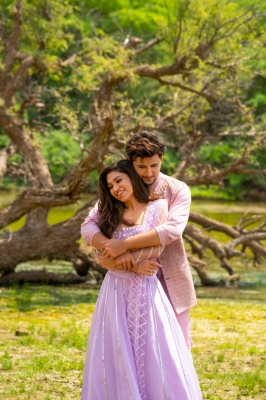 Talking about the song, Tulsi said, “Tera Naam is a beautiful melody that will definitely resonate with all listeners and will make it’s way to the top in wedding playlists. It’s always amazing working alongside Darshan Raval as we share similar musical sensibilities and a great rapport as friends. When we saw the final outcome and immense love of fans for our previous collaborations, Tere Naal and Is Qadar, we knew that the two of us should surely come together for more great music and thus, Tera Naam was conceptualised. We can’t wait for our fans’ reaction to this amazing, vibrant and upbeat romantic song!”

‘Tera Naam’ is an upbeat romantic number set against the concept of a bride and groom’s courtship before getting married.

The song which was shot in the traditional yet picturesque location of Rajasthan traces the beautiful phase of a girl and boy deeply in love.

Darshan said, “Tera Naam is the third time Tulsi and I are joining hands and the track has turned out to be simply fabulous. It’s definitely going to be a wedding anthem!”

Produced by T-Series, the song will be releasing soon.

Mumbai– The makers of the upcoming movie ‘Sardar Udham’ unveiled the trailer of the film on Friday. Bollywood heartthrob Vicky Kaushal looked every inch convincing as he plays the title role in the film. 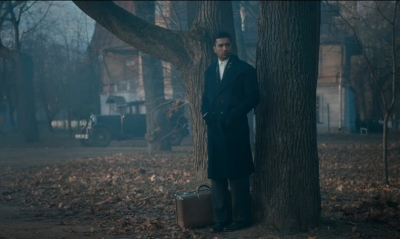 “The story of Sardar Udham Singh is one that enthralled and inspired me. It represents strength, pain, passion, extraordinary courage and sacrifice, and many such values that I have tried to do justice through my character in the film,” Vicky said.

The actor said that the role called for a lot of physical, and even more mental preparation to get into Udham Singh’s shoes and “bring to life the story of a man whose heroism and grit stand unmatched.”

He added: “I look forward to sharing an intriguing page from the history of India’s freedom struggle through this film.”

The two-minute thirty second long trailer, gives a glimpse into the life of Sardar Udham Singh.

This story showcases bravery, fortitude and fearlessness of an unsung hero, from the deeply buried annals of our history.

The film focuses on the undeterred mission of Sardar Udham Singh to avenge the lives of his beloved brethren, who were ruthlessly murdered in the Jallianwala Bagh massacre of 1919.

Director Shoojit Sircar said that ‘Sardar Udham’ to him is not just a film, it is a dream come true.

“It took years of in-depth research to unearth and share with the world the valiant story of a martyr who sacrificed his life to avenge India’s most dreadful tragedy. The true essence of Udham Singh’s patriotism and bravery lives in the hearts of each and every person in Punjab even today,” he said.(IANS)