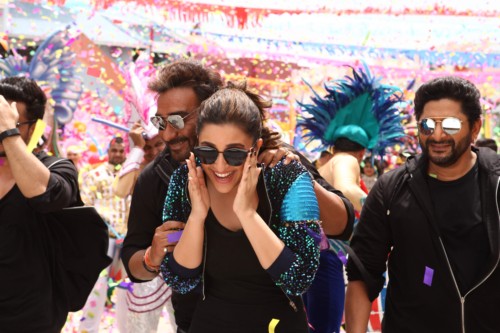 The film was earlier due to release on August 18, but the date was shifted to avoid clutter.

The makers “wanted to get a better release date as there has been a lot of hard work, research and thought put behind each and every scene of the movie”, read a statement issued on behalf of the producers on Wednesday.

“As a director, it is very important for me to ensure that the film reaches out to maximum audience as it takes a lot of patience and perseverance to make a film on a subject like this. We are all set to release on September 22 and hope the audience loves it as much as we loved working on it,” Lakhia said.

The film has been produced by Nahid Khan with Swiss Entertainment.

“It is always nice to see women kick some ass. I read somewhere that she has performed her own stunts, Which I think is incredible. All in all it’s a fun, stylized film with great music and a fantastic soundtrack which is very reminiscent of the 80s and the 90s,” Shruti said on the sidelines of a premiere of the movie here.

The premiere was held here earlier this week as part of the MAMI year round programme in association with PVR Pictures and VKAOO.

Directed by David Leitch, the movie is based on a 2012 graphic novel “The Coldest City”. Set in 1989, the story revolves around a spy who has to find a list of double agents who are being smuggled into the West on the eve of the collapse of the Berlin Wall.

Dilip Kumar discharged after a week in hospital

Mumbai–Legendary actor Dilip Kumar, 94, who was undergoing treatment for kidney-related problems at the Lilavati Hospital here since a week, was discharged on Wednesday.

Dilip Kumar was seen in a wheelchair wearing a pink shirt when he came out of the hospital. He was accompanied by his wife and former actress Saira Banu, who was seen in a printed red suit with a dupatta on her head.

“By the grace of Allah, Dilip Sahab is under the care of Dr. Nitin Gokhale, Dr. Arun Shah of Lilavati Hospital and Sahab’s personal family physicians Dr. R.C. Sharma and Dr. S. Gokhale, along with the able input of Dr. S.D. Bapat. This excellent team has given the green signal to take Sahab home today.

“My gratitude to fans, friends for prayers, doctors for expert treatment, hospital staff n Sahab’s personal attendants for all the care. It is the Almighty God’s will and benevolence that I wish to acknowledge in all humility and gratitude.”

The thespian was admitted to the hospital on August 2 due to dehydration and urinary tract infection. High potassium and creatinine levels had raised concerns that he may have to be put on dialysis. Doctors decided against it after he started responding well to treatment.

Mumbai–Actor Rajkummar Rao, who has featured in intense roles in films like “Shahid” and “Trapped”, will be seen dancing for a change in the quirky entertainer “Bareilly Ki Barfi”. He says he learnt it by looking at actors.

“Like most of the people in small towns, I learned dancing by looking at a lot of actors dancing. That’s how I learnt it,” Rajkummar said in a statement.

In “Bareilly Ki Barfi”, the National Award winning actor is playing the role of Pritam Vidrohi, a small town guy.

He gave a dekko of his dancing skills at the launch of the song “Twist kamiraya” here earlier this week.

Written by “Dangal” writer-director Nitesh Tiwari and Shreyas Jain, the movie is scheduled to release on August 18.

Hyderabad–Filmmaker Rohit Shetty and his “Golmaal Again” cast, led by actor-producer Ajay Devgn, are having fun under the sun while filming the title track of the upcoming film here.

Confetti flying in the air, hundreds of backup dancers shining in metallic outfits with pom poms in hand, some riding bikes and skateboarding, some beating the drums with enthusiasm, others looking over the balcony of houses, a drone hovering over, with big speakers and fans and swanky cars parked nearby — this is how Shetty’s set looked like when this IANS correspondent travelled to Ramoji Film City here earlier this month.

It seemed like everyone was in a mood to celebrate. The fun got doubled when the film’s cast Ajay, Parineeti, Arshad Warsi, Kunal Kemmu, Tusshar Kapoor and Shreyas Talpade — dressed in black — joined the team to shoot for the title track, sung by Brijesh Shandilya.

“We are shooting the title track of ‘Golmaal’. This is the fourth instalment of ‘Golmaal’. Rohit wants to make it bigger and better. So, the song is going to be bigger, better and nicer.

“Earlier the dancing used to be more western, but this time it’s more ‘desi’. We are enjoying ourselves. We are working together after a gap of seven years. We had a great time shooting,” Shreyas told select media here during his break.

Choreographer Ganesh Acharya, sitting at a distance from the team and looking at a monitor, shouted at the dancers to show more energy and gave instructions as and when needed.

Ajay, who generally shies away from dancing, seemed to have struggled a little bit to give the perfect shot. But ultimately, Shetty and Acharya looked happy with the final outcome.