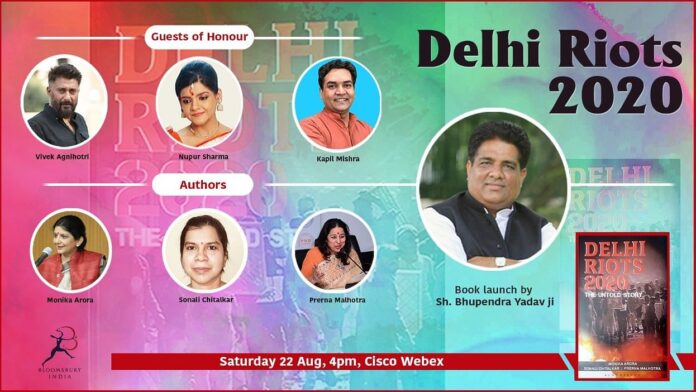 New Delhi–“Delhi Riots 2020: The Untold Story”, a book on the horrific violence in Northeast Delhi earlier this year, has been withdrawn by its publisher, Bloomsbury India, after it stirred a huge controversy in the wake of an “invitation” stating that BJP leader Kapil Mishra, seen by many as sparking the riots, would be among those attending its virtual launch on Saturday.

The event was “organised without our knowledge by the authors, with participation by parties of whom the Publishers would not have approved”, Bloomsbury said, adding it “strongly supports freedom of speech but also has a deep sense of responsibility towards society”.

“Bloomsbury India had planned to release Delhi Riots 2020: The Untold Story in September, a book purportedly giving a factual report on the riots in Delhi in February 2020, based on investigations and interviews conducted by the authors.

“However, in view of very recent events including a virtual pre-publication launch organised without our knowledge by the authors, with participation by parties of whom the Publishers would not have approved, we have decided to withdraw publication of the book. Bloomsbury India strongly supports freedom of speech but also has a deep sense of responsibility towards society,” the publisher said in a statement.

Reacting to the controversy, Monica Arora, one of the three authors of the book, said the “messiahs of freedom of speech” are criticising it even before it has released.

“No one has read the book, then how can anyone decide its tone or tenor? At least, read the book first and then we can have a debate.”

“The book is available for pre-order. I would love to debate side after you have read the book,” tweeted Sonali Chitalkar, another of the authors, adding that she had heard Mishra only telling police officers to clear a road occupied by anti-CAA protesters to prevent the situation from getting out of hand.

“I have heard his speech. He has only told the police officials that if they did not clear the stretch occupied by anti-CAA protesters within two days, then they would take matters in their own hands. There is nothing inciting or objectionable in it. The police in its affidavit has found that Kapil Mishra’s speech did not incite the violence. Then what’s wrong in him being in the guest list,” for the virtual launch, she asked.

This debate has now been rendered infructuous due to the book being withdrawn.

A storm had been brewing since late Friday after an “invitation” on social media, with the Bloomsbury logo at its bottom left, stated that BJP General Secretary Bhupendra Yadav would launch the book with Kapil Mishra , besides authors Monica Arora, Sonali Chitalkar and Prerna Malhotra, as also filmmaker Vivek Agnihotri, among others, attending the virtual event.

In response to this, Bloomsbury selectively issued a statement on Friday evening denying it was involved in the launch, saying: “Bloomsbury India is publishing the book Delhi Riots 2020: The Untold Story by advocate Monica Arora, Sonali Chitalkar, Prerna Malhotra in September 2020. We are not organising any launch event for the book tomorrow (Saturday) and there are no events being planned yet. If you have come across any event information for the above book, please note it is not being organized or sponsored by Bloomsbury India.”

Responding to the storm, Mishra tweeted: “India and the world will read it and know the Truth of Anti Hindu Delhi Riots

“No Hate Campaign and Propaganda Machineary Can STOP the Truth to come out.”

“At least 53 people lost their lives in the riots and they deserve better than this. Those who made inciting speeches or were held responsible for the violence as per the account of several victims, should be investigated for their roles and not allowed to use platforms to further their agenda. Bloomsbury said that their logo was inappropriately used but the fact is that they published the book and this, to me, amounts to further lowering of standards in public life,” Advocate Rebecca John, who has represented several of those accused in various cases related to the Delhi riots, has been quoted as saying. (IANS)