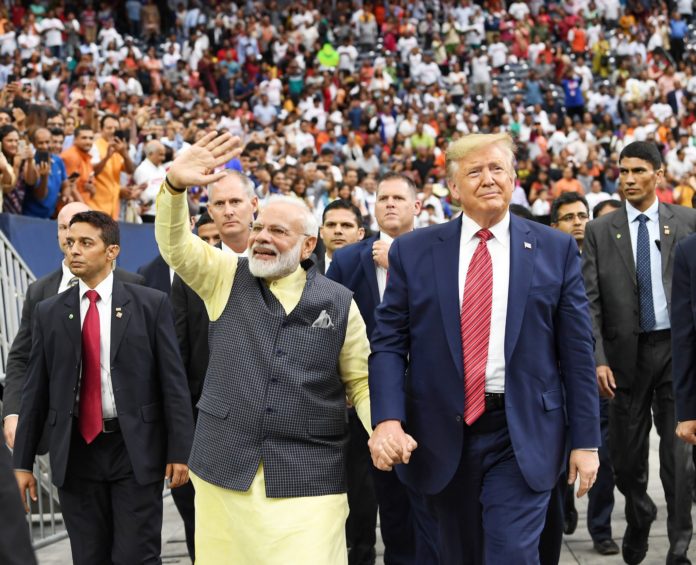 New Delhi– Ever since the glitzy congregation at ‘Howdy Modi’ in the US last year there was a murmur, but now a senior functionary of the ruling BJP here has confirmed it with a tweet — India may “play a role” in the US Presidential election.

Though late on Wednesday minutes after the tweet was posted, it also was deleted, the man who posted it added “seriousness” to the matter.

That man was none other than B.L. Santosh, the national general secretary (Organisation) of BJP and among the top four influential members of the party.

He tweeted: “How much ever neutral we wish to be you compel us to play a role in Presidential election. Sorry to say so… But you are compelling us.”

That unusual and strongly worded tweet came in response to Sanders saying: “Over 200 million Muslims call India home. Widespread anti-Muslim mob violence has killed at least 27 and injured many more. Trump responds by saying, ‘That’s up to India’. This is a failure of human rights.”

The senior BJP leader’s anguish is believed to have stemmed from making the Delhi violence look like a one-sided, anti-minority pogrom, than Sander’s rant at Donald Trump.

While addressing a press conference in Delhi, on the second day of his tour, the US President was asked many times, both about the contentious Citizenship Amendment Act and the ongoing stir in North East area of Delhi. Speaking on the violence, President Trump had said, “As far as the individual attacks, I heard about it, but I didn’t discuss that with him (Modi). That’s up to India.”

Sanders, a left leaning democrat and a staunch critic of Donald Trump labelled the US President’s much publicised India visit that show rare bonhomie between PM Modi and him, as “failure of leadership”.

Sander’s barb, which was perceived by the BJP leader as against Indian government led by the BJP, comes in the wake of another Democratic presidential nominee — Senator Elizabeth Warren spoke out against the Delhi stir.

This is not the first time, Sanders hit out at Modi, either directly or indirectly. He criticised Modi just ahead of the “Howdy Modi” event that saw the two world leaders publicly bond. Though invited to the event, many Democrat leaders like Nancy Pelosi, and Brad Sherman had opted out of Modi’s mega show in Houston, citing prior commitments. At the end it turned out to be a Republican-dominated event, where Modi happily talked about ending Article 370 and Trump about “radical Islamic terrorism”. The entire stadium gave him Trump a standing ovation which seemingly did not go well with the democrats with a looming US presidential election.

Now, with Sanders upping the ante, one of BJP’s most influential leader and increasingly seen as BJP President J.P. Nadda’s eyes and ears — Santosh’s public warning, though deleted, will surely not go unnoticed with the Democrats who have raised objections with Article 370, India’s decision to end special status to Jammu and Kashmir or the recent Citizenship Amendment Act. (IANS)