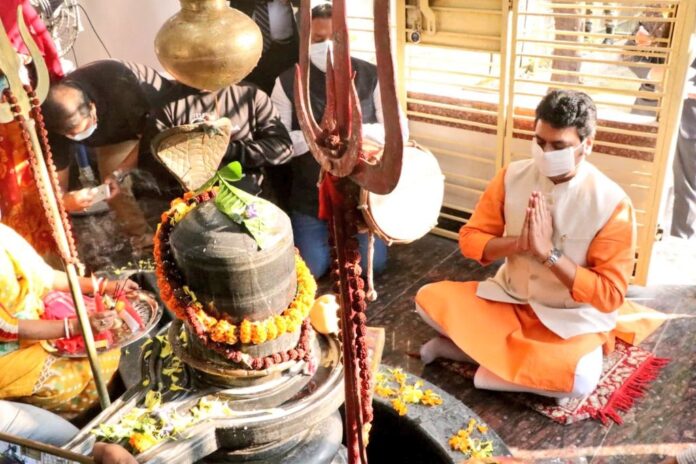 New Delhi–Senior BJP leaders, including Chief Ministers of party-ruled states, held prayers at temples across the country on Thursday for the well-being and long life of Prime Minister Narendra Modi.

The prayers were held a day after Prime Minister Modi’s security was breached during his visit to Punjab.

Chouhan chanted the ‘Mahamrityunjaya’ mantra for the Prime Minister’s welfare in Bhopal’s Gufa temple. Similar chants were also raised in other Shiva temples in Madhya Pradesh, including Mahakaleshwar and Omkareshwar Jyotirlingas.

An official at the CMO in Tripura said that Deb visited the Meher Kalibari in Agartala in the afternoon and prayed for the long life of the Prime Minister.

“May lord Shiva protect our Adarniya Prime Minister from all the evil forces and grant him an Aarogya Jeevan,” he said in another tweet.

The Bharatiya Janata Yuva Morcha (BJYM), the youth wing of the party, will hold marches across the country in the evening. BJYM national president Tejasvi Surya tweeted, “Congress deliberately put the life of the PM at risk yesterday. This was an attack not only on the office of PM but on democracy itself. BJYM strongly condemns this criminal act. BJYM will hold large Mashaal Marches at 6 PM today evening at all districts across country.” “Prime Minister Narendra Modi has been working tirelessly for our safety and security in spite of indomitable challenges from all corners. Today, I join the nation in praying for his health and long life through Mahamrityunjay Jaap that is being held across the nation,” Surya further tweeted.

The Prime Minister cancelled his scheduled visit to Punjab’s Ferozpur due to the security breach. On Wednesday, Prime Minister Modi was visiting Ferozpur to lay the foundation stone of multiple development projects worth more than Rs 42,750 crore.

The Ministry of Home Affairs, taking cognisance of the security breach, has sought a detailed report from the state government. It also asked the Punjab government to fix responsibility for this lapse and take strict action. (IANS)