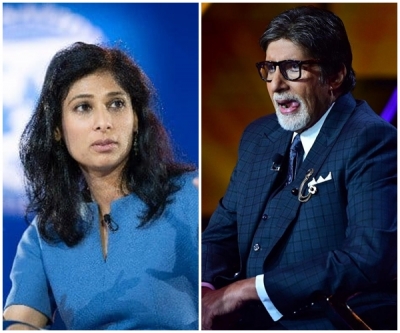 Mumbai–  Indian-American economist and Chief Economist of the International Monetary Fund (IMF) Gita Gopinath on Friday reacted to a complimentary post by Amitabh Bachchan, saying he was the greatest of all time and that she was a huge fan of the Bollywood superstar.

Big B had called Gopinath a beautiful face on his television quiz show, Kaun Banega Crorepati.

Gopinath shared a video clip of the moment from show on her verified Twitter account on Friday, where Bachchan can be seen telling a contestant in Hindi while showing Gita’s photo on the big screen: “She has such a beautiful face, nobody can relate her with economy.”

Reacting to the clip, Gita tweeted: “Ok, I don’t think I will ever get over this. As a HUGE fan of Big B @SrBachchan, the Greatest of All Time, this is special!”

Responding to her tweet, Big B wrote: “Thank you Gita Gopinath ji .. I meant every word i said about you on the show .. said in utmost earnestness.”

However, not all netizens were overjoyed with Bachchan’s comment in the KBC clip. A section of social media users slammed the veteran actor for hinting at the idea that a woman with a beautiful face could not be an expert in economy.

“So sad that he just had to mention your looks while pointing to your earned achievement… Anyway, congratulations to you @GitaGopinath : keep the flag flying high!” commented a user.

“I didn’t like the comment about linking beauty with brains. Stupid of Mr. Bachchan to suggest that beautiful women can’t be economists,” expressed another user. (IANS)