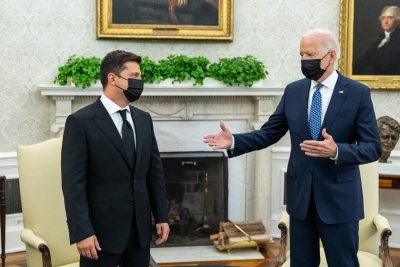 Washington– In a phone call with his Ukrainian counterpart Volodymyr Zelensky, US President Joe Biden reaffirmed Washington’s readiness along with its allies and partners to “respond decisively if Russia further invades” Kiev, according to the White House.

In a statement following the call on Thursday, the White House said that Biden also “underscored the commitment of the US to Ukraine’s sovereignty and territorial integrity”.

“President Biden noted the US has provided Ukraine with over half a billion dollars in development and humanitarian assistance in the last year, and is exploring additional macro-economic support to help Ukraine’s economy amidst pressure resulting from Russia’s military build-up,” it said.

The statement further said that despite the departure of the family members of the staffers at the US Embassy in Kiev, the mission “remains open and fully operational”.

According to the White House, the leaders also discussed coordinated diplomatic efforts on European security, underscoring the principle of “nothing about Ukraine without Ukraine”.

Biden, the statement said, also expressed Washington’s support for resolving the conflict in eastern Ukraine through the Normandy Format, a mechanism established in 2014 that involves French, German, Russian and Ukrainian diplomats.

The President said he hoped that a recommitment by the quadrilateral dialogue members to the July 2020 ceasefire agreement will help decrease tensions and advance the Minsk agreements.

The agreements call for an immediate ceasefire between government troops in Kiev and armed groups in the Donbas region while seeking a diplomatic solution to the conflict.

Taking to Twitter, Zelensky said that during the call the two leaders discussed “recent diplomatic efforts on de-escalation and agreed on joint actions for the future”.

He also confirmed that “possibilities for financial support to Ukraine were also discussed”.