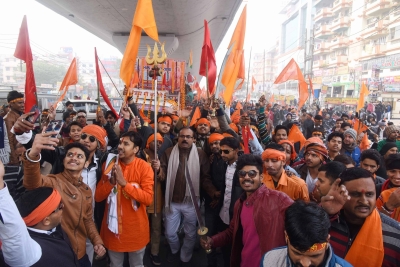 Lucknow– Bajrang Dal activists are up in arms over the content being shown on the OTT platform.

The Bajrang Dal, with other Hindu outfits, is planning to launch a campaign against web series for encouraging vulgarity and showing an ‘incorrect picture of Indian culture globally’.

Scores of activists from International Hindu Parishad and Bajrang Dal, holding placards and banners, staged demonstration in Kanpur on Thursday.

The activists stated that streaming platforms should be more of pro- and not anti-Indian culture.

City vice-president Bajrang Dal, Ajay Mishra asked authorities to respond soon and ban airing of the web-series as it allegedly maligns the image and reputation of the country.

“The worst affected in the ongoing time of pandemic are school children, who are in possession of android phones for online classes, but during their leisure hours, they easily have access to cheap web series, which are poisoning their young minds,” he said.

Mishra claimed that in the web series, scripts are cheap, actors are indulging in vulgarity and encourage use of abusive language.

“We have also sent a letter to chief minister Yogi Adityanath in this regard, seek his intervention in the matter,” he stated. (IANS)