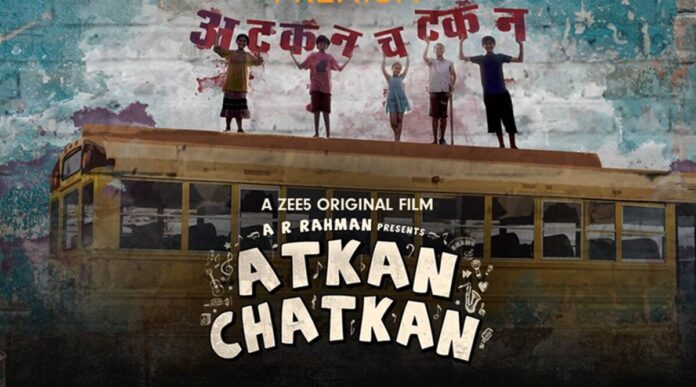 There are films that set out with noble intention but actually have no clue how to go about it. Atkan Chatkan is one such effort. The aim is to celebrate the underdog, and a spirit to win against all odds. Amateurish execution comes in the way, and rags-to-riches cliches tend to fill the frames whenever the narrative runs out of imagination (which is often).

This is the story of Guddu (Lydian Nadhaswaram), a boy of about 10 or 11, who works at a tea stall. Guddu has a passion for music, and is gifted too. He can strike up rhythm and create sounds out of nothing, and without an instrument. Guddu will soon meet a likeminded bunch of street kids, who can make music out of just about anything. Guddu realises his secret musical dream could become a reality if he manages to form a band with the other kids. They name the band Atkan Chatkan.

There’s a standard picture of struggle for Guddu at home, too. He lives with an alcoholic father (Amitriyaan) and his mother left them before he gathered senses. When the principal of a local music school gets the band of urchins to enter a high-profile music contest, it is an opportunity for Guddu and the group to change their lives forever and for the better.

Director Shiv Hare and co-writer Aadesh Rathi have tried incorporating Slumdog Millionaire vibes in their screenplay, to define Guddu’s happy-go-lucky street life that comes with the expected quota of exuberance and angst. Unfortunately, Hare lacks Danny Boyle’s storytelling skills. Also, too many subplots are stuffed into the narrative, which only makes the film incoherent.

The film is presented by AR Rahman who incidentally had won his two Oscars for Slumdog Millionaire. Generically, Atkan Chatkan is a musical drama, so music plays a vital role in pushing the narrative. Master percussionist Sivamani shoulders the job of composing the film’s tunes, and he has lined up a star-studded playback cast that includes Amitabh Bachchan and Sonu Nigam. The finale performance that Guddu and group put up at the contest is vintage Sivamani, blending percussion magnificence with interesting vocal quirks.

In a film that, in the best of sequences, is mediocre in terms of writing and direction, music could have been a high point. Sadly for Sivamani, the lackluster storytelling affects the use of songs in the film, too.

The young band of streetside musical geniuses is adequately acted out by Lydian Nadhaswaram and his fellow child artistes (Yash Rane, Sachin Chaudhary, Tamanna Dipak, Ayesha Vindhara), though a lot of hamming goes on in the name emoting by some of the grown-up cast members. Goes without saying, it does not help a film that struggles to finds its rhythm all along. (IANS)