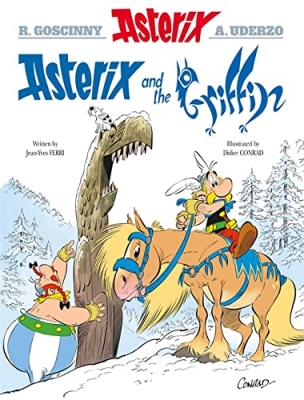 New Delhi– Deep in the frozen plains of Barbaricum, the Sarmatians face a terrible threat. The Romans are approaching in huge numbers to capture the Griffin, a sacred and terrifying beast, and they’ve kidnapped the beloved niece of the wise old Shaman, Fanciakuppov, to lead them to it. Determined to stop them, Fanciakuppov seeks the help of his Gaulish friends.

Follow Asterix and Obelix as they fight alongside the fearless Amazon warrior women to rescue the prisoner and prevent the Romans reaching this formidable beast!

Loved across the Known World, the multi-million bestselling series is back with its 39th adventure. Filled with jokes, new characters and bravely fought battles, “Asterix and the Griffin” (Sphere/Hachette) will delight fans old and new.

The author, Jean-Yves Ferri, born 1959, is a French writer, designer, and colourist of comics. In 2011, he was chosen as the writer for the next instalment of the Asterix series created by Rene Goscinny and Albert Uderzo. Uderzo personally mentored him and Didier Conrad, who was subsequently announced as the artist.

Didier Conrad (born in 1959) is a French comics artist and writer. Since 2012, he has been the artist of the popular Asterix series. (IANS)