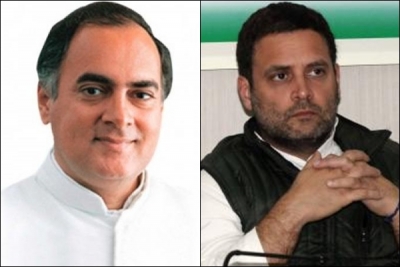 New Delhi–Former Congress President Rahul Gandhi on Friday said that the assassination of his father and former Prime Minister Rajiv Gandhi in 1991 changed him.

Also noting that he had always been accustomed to an “environment” of public service, he said that he was brought up with the idea that you cannot tolerate injustice.

Rahul Gandhi made the remarks during an online interaction with Nicholas Burns, the Professor of the Practice of Diplomacy and International Politics at Harvard’s John F. Kennedy School of Government, and a former US Under Secretary of State.

To a question by Burns about his family’s engagement in public service and if he had always assumed, when young, that some form of public service would be his life’s work, Rahul Gandhi, a Lok Sabha MP from Kerala’s Wayanad, said: “First of all, families are unique in a way. So, I guess I don’t see it (my family) as a unique family, I just see it as a family that just happens to go through certain things.”

He said that he grew up in the environment of public service.

“When I was small, there was this underlined thing of a sense of trying to understand India, what is going on, what are the forces it plays and some of these things on how it works. In this sense I was embedded in it and I saw it from the beginning,” he said.

Discussing the assassination of his father in Tamil Nadu in the run-up to the 1991 general elections, he said: “Of course, there were certain events that sort of pushed me… in a way, my father’s assassination was one of them that developed that sense that I felt that my father was fighting some particular forces and he was wronged. And so as a son, that of course, had an effect.”

“And also I was brought up when I was small and young with the idea that you cannot tolerate injustice.

“And that’s something what I have been trained from beginning. If I see this up, it rattles me up and I get agitated and it doesn’t matter to whom the injustice is being done. And if that injustice is going with somebody whom I am not very fond of, that gets me going. So those are the type of things,” he said. (IANS)