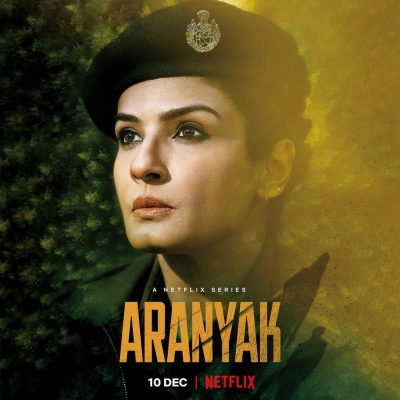 The title ‘Aranyak’ in Bengali means a forest-dweller. In this case, it refers to the mythical Nartendua, the half-human half panther creature who is terrorising the town of Sironah, situated in hilly and forested terrain in North India.

The rape and gruesome death of 19-year-old Aimee (Anastasiya Hamolka), the daughter of a French Tourist, Julie Baptiste (Breshna Khan), rakes up the rumour of the Nartendua who apparently had terrorised the town years earlier when it killed nine girls.

Apart from ambition, Kasturi has a daughter – the same age as the victim, and Angad is haunted by his past; this is what drives the duo to investigate the case with passion.

During the investigation, among others, they deal with: Jagdamba Dhumal (Meghna Malik), a politician who is trying to protect her wayward son Kanti (Tejaswi Dev); Mr. Manhas (Zakir Hussain), the influential local politician cum businessman who is trying to spread his tentacles into the society along with his prospective son-in-law Ravi Prashar (Indraneil Sengupta); Bunty Rawat (Wishvesh Sharkholi) a tourist guide who is pressurised to confess; Sunder (Ajeet Singh Palwat) a drug peddler who is trying to make a fast buck; Omi Chawla (Mahesh Shetty) a nefarious drug dealer; and Mahadev Dogra (Ashutosh Rana) the retired Head Constable and Kasturi’s father-in-law who was attacked by the Nartendua years ago.

Each episode, mounted with reasonable production values, as simple as they may seem, is moderately paced with a plethora of characters, organic transition and plausible events, keeping you hooked to its very end.

On the acting front, every actor is earnest, natural and they deliver a robust performance. But a special mention must be made about Raveena Tandon. This is probably one of her best performances after a very long time. She nails her character effortlessly with her non-glamorous demeanor and rustic pahadi accent.

While the plot of this Netflix series with political ploys, personal agendas and the myth of the murderous entity are all intriguing, the premise and the setting of the tale appear oft-seen and familiar. One for sure is the series ‘Candy’ streaming on Voot.

But then who is complaining, especially when you like murder mysteries. (IANS)