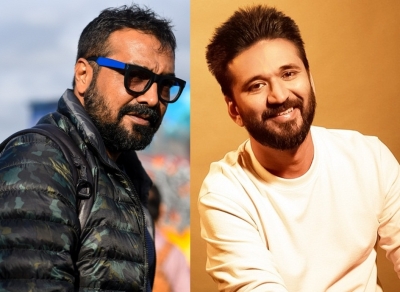 Mumbai– Anurag Kashyap has turned into a great admirer of Amit Trivedi’s music, which he composed for his upcoming film ‘Almost Pyaar With DJ Mohabbat!’.

He appreciated the hard work put by Amita and Amit Trivedi and lyricist Shellee who worked on the music album for four long years and finally produced the tracks.

Anurag, best known for movies such as ‘Gangs of Wasseypur’, said: “I and Amit go a long way, it has been a friendship of 15 years and everytime we have collaborated he has given me some of the unforgettable melodies and this one is no exception. Amit has put his heart and soul for the album of this movie and his extreme patience with me in every situation is what I adore the most.”

He added: “Amit and Shellee spent four years working on the music because it’s a very different world to belong to lyrically. It was hard work as Shellee had to let go of the poet in him and sat with his son and my daughter to use the lingo of today’s generation.”

Amit rose to fame with his work in ‘Dev D’, and later also composed music for ‘Wake Up Sid’, ‘Aisha’, ‘Udaan’, ‘Chillar Party’ and many more films.

Sharing his experience of working with Anurag, Amit said: “Anurag has a distinct vision for his films. ‘Dev D’ was a turning point in my career but we approach each film from a fresh lens and attempt to crack something new with every collaboration and that’s exactly what audiences can expect from the ‘Almost Pyaar with DJ Mohabbat’ album.”