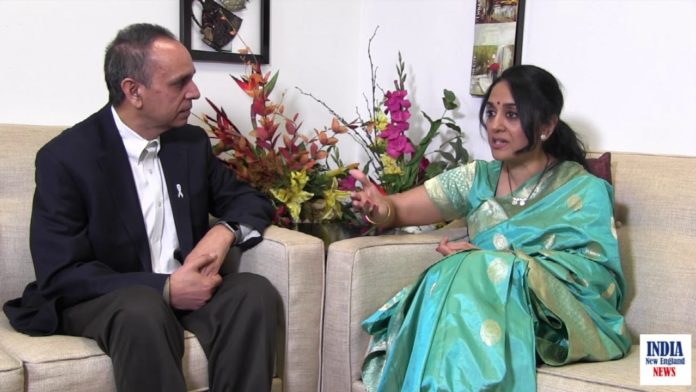 CAMBRIDGE, MA—Indian-American singer Anuradha Palakurthi will release her video album “Jaan Meri”, which has been produced with over 70 musicians and a crew of approximately 450 people. The album will be released on March 23 at a music event organized by MITHAS at MIT’s Kresge auditorium in Cambridge, MA.

In an exclusive video interview with INDIA New England News, Ms. Palakurthi talks about “Jaan Meri” video album and MITHAS. Over 70 musicians were involved in recording the songs – and almost 450 people were involved in making the videos.

To watch the interview with Ms. Palakurthi, please click here or on the image below.

The March 23 event also kicks off MITHAS’ Spring Season with Sitar maestro Ustad Nishat Khan, a scion of one of the oldest Gharanas of Hindustani music and one of the top sitar players in the world. Ustad Nishat Khan is also the composer of “Jaan Meri” album.

Ustad Nishat Khan is one of India’s finest musicians and a virtuoso sitar player, transcending musical barriers with his provocative expression and spellbinding technical mastery. He is the son and disciple of Ustad Imrat Khan, the nephew of the late Ustad Vilayat Khan.

Ms. Palakurthi, who earlier this year launched her new project “Music Room” with veteran Bollywood singer and composer Bappi Lahiri and his son Bappa Lahiri on Zee TV Americas, has performed many live music concerts with Bollywood singers across the United States. She will also perform live on March 23.