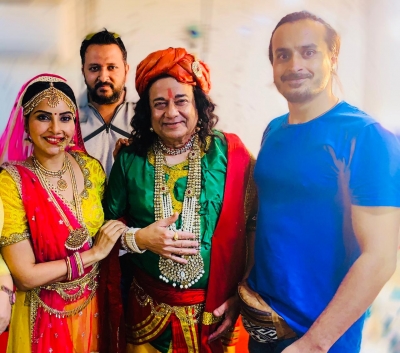 Mumbai–Singer Anup Jaloto, who is also known as a Bhajan Samrat, has teamed up with singer Dipti Chaturvedi to sing a devotional track titled “Me kanha k adhro pe”. The song features actress Geetanjali Mishra as Radha and Jalota as Krishna.

“Playing Lord Krishna is a special feeling, that too in a self-composed song. The team was fantastic including my co-singer and co lyricist Dipti. It was great that the very talented actor Geetanjali became a part of the song,” Jalota said.

Geetanjali, who is known for her role in shows such as “Ballika Vadhu”, “Crime Patrol” and “Savdhaan India”, said: “Being known for mostly being a criminal or victim in crime shows of Indian television, getting to play a part of this song was a different and pleasant experience. I have never done a shoot for a song, not just devotional. With such a situation I feel really blessed to play the character of Radha ji.”

The song, for which the sets were resurrected to give a look of Mathura and Vrindavan look, is produced by Vineet Chaturvedi. (IANS)