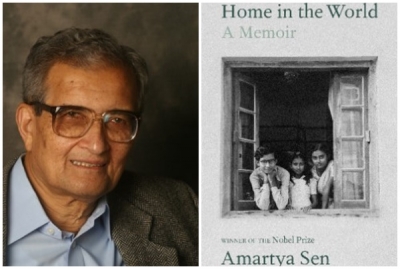 New Delhi– This is a memoir of an extraordinary life in India and England, and the intellectual growth of one of the world’s leading public intellectuals.

Where is ‘home’? For Amartya Sen (87), home has been many places — Dhaka in present day Bangladesh where he grew up, Santiniketan where he was raised by his grandparents as much as by his parents, Calcutta (now Kolkata) where he first studied economics and was active in student movements, and Trinity College, Cambridge, where he entered aged 19.

In “Home in the World”, to be published by Penguin on July 8, Sen, who won the Nobel Prize for Economics in 1998, brilliantly recreates the atmosphere in each of these. Central to his formation was the intellectually liberating school in Santiniketan founded by Rabindranath Tagore (who gave him his name Amartya) and enticing conversations in the famous Coffee House on College Street in Calcutta. As an undergraduate at Cambridge, he engaged with many of the leading figures of the day.

This is a book of ideas — especially Marx, Keynes and Arrow — as much as of people and places.

In one memorable chapter, Sen evokes “the rivers of Bengal” along which he travelled with his parents between Dhaka and their ancestral villages. The historic culture of Bengal is wonderfully explored, as is the political inflaming of Hindu-Muslim hostility and the resistance to it. In 1943, Sen witnessed the Bengal famine and its disastrous development.

Some of Sen’s family were imprisoned for their opposition to British rule: The relationship between Britain and India is another main theme of the book. Forty-five years after he first arrived at the Gates of Trinity, one of Britain’s greatest intellectual foundations, Sen became its Master.

“The world’s poor and dispossessed could have no more articulate or insightful a champion,” said former UN Secretary General Kofi Annan.

“With his masterly prose, ease of erudition and ironic humour, Sen is one of the few great world intellectuals on whom we may rely to make sense out of our existential confusion,” said late South African writer, political activist and recipient of the 1991 Nobel Prize for Literature, Nadine Gordimer.

“One of the great minds of both the twentieth and twenty-first centuries. We owe him a huge debt,” said British economist and academic, Nicholas Stern, the Baron Stern of Brentford.

“A distinguished inheritor of the tradition of public philosophy and reasoning — Roy, Tagore, Gandhi, Nehru … if ever there was a global intellectual, it is Sen,” said Sunil Khilnani, professor of politics and history at Ashoka University, previously a professor of politics and Director of the King’s College India Institute and the author of “The Idea of India” (1997).

“Amartya Sen is one of the most distinguished minds of our time (who) enjoyably mixes moments of profundity with flashes of mischievous provocation,” said Scottish historian and writer, art historian and curator William Dalrymple, whose “The Company Quartet” on the saga of the East India Company evolved over two decades of research.

Amartya Sen is the Professor of Economics and Professor of Philosophy at Harvard. He was Master of Trinity College, Cambridge, from 1998 to 2004. His many celebrated books including “Development as Freedom” (1999), “The Argumentative Indian” (2005), “Identity and Violence: The Illusion of Destiny” (2007), and “The Idea of Justice” (2010), have been translated into more than 40 languages. In 2012 he received the National Humanities Medal from US President Barack Obama and in 2020 was awarded the Peace Prize of the German Book Trade by President Frank-Walter Steinmeier. (IANS)