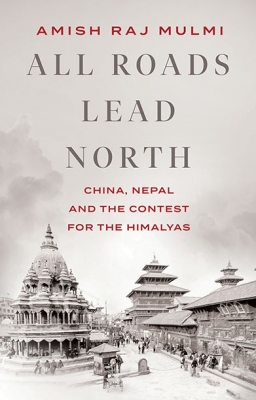 New Delhi– Amish Raj Mulmi’s unbelievable jubilation of ‘Nepal’s turn to China and his painstaking efforts in proving the flawed argument how all roads lead north– sweeps over the possibility of a genuine and unbiased account coming from him on China’s misadventures in the South Asian region, their historical progression and Nepal’s continuing vulnerability. With 66-pages in notes and purposefully featured details without connecting the dots, the book puzzles even a keen watcher of Nepal. The chosen plot is serious and the authors preoccupied romantic notion in dealing it makes the whole narrative reductionist– and deeply biased in favour of China, an expansionist force in the northern neighbourhood of Nepal.

The chosen plot is serious and the author’s preoccupied romantic notion in dealing it makes the whole narrative reductionist — and deeply biased in favour of China, an expansionist force in the northern neighbourhood of Nepal.

With hindsight, the author was not expected to juxtapose the ground realities with his uncaring assessment and projections — overlooking the fragile polity in country and regional geo-strategic sensitivities.

The misinterpretation knows no bound when one reads it at the fag end of the book (page 209-210):

“China in many things at once in Nepal today. It is a superpower, a beneficent aid-giver, a friend in need, an essential provider, a demanding neighbour, an older brother, a competitor, a model of development and a vision of a developed future. China is changing regional and global dynamics in unprecedented way than Nepal. As China declares itself on the world stage, Nepal wants to tag along for the ride. Relations have never been better than in the contemporary era, but they need to be sustained, nurtured and developed as they evolve. It is in Nepal’s interest to do so, and imperative to do it in a way that acknowledged its own aspirations.”

Mulmi’s prose would have earned praise provided he had written his maiden book as an official spokesperson of People’s Republic of China, as an independent observer, he had all the reasons to cope any compulsion that made him voicing for China despite its excesses at home and in the world.

Just to shun India and downplaying the complementarity that India-Nepal relations stand for, he travelled extra miles and hurriedly write off India as ‘non-performing asset’ (page 213):

“Far away, in Delhi, one could imagine a chuckle in the corridors of South Block. Nepal’s politics, and its politicians, are a quagmire. Its leaders play each other and its neighbours constantly in the struggle for power. India had long waded into the puddle, played the game and lost. Now, it was China’s turn.”

Such words are disservice to Nepal, China — as well as India. While presenting Nepal as a welcoming turf for ‘tug war’, its sovereign status is undermined. India’s ties with Nepal hold not much significance, this book suggests — and China is at loss as it is represented in poor light as the ‘next interventionist power’ in Nepal.

The author acknowledges the significance of ‘optics’ in international relations, however, he appears unassuming as he selectively drops it as a ‘virtue’ for judging the political course of action at homeland. Mulmi has not enlightened his readers’ with loads of preferential sourced materials — besides his travels to the places, meeting people and presenting them as the only authentic beholders of truth. More often than not, it seems, Mulmi counts not much on the text, context and people that have not come his ways.

The author missed an opportunity to write the first major book about India’s share of contributions and mistakes in Nepal as the closest ally integrated through the tenets in social, cultural, economic and diplomatic realms — Nepal’s inability to dissect the fallouts of mixing the domestic and international policies — and China’s expansionism leveraging the hiccups in bilateral relations between India and Nepal. As a sovereign country and functional democracy, Nepal should claim for a greater stake in South Asia. It would be undeserving on anyone’s part, if such a chance is denied for just polarising the discourse — thus leaving behind the aspirations’ of mass Nepali.

Even from the nationalist point of view too, it would be much more worthwhile to give due weightage to own action — rather accusing neighbours of interventionism and still expecting them to stay involved in rivalry at the geostrategic hotspot, Nepal. No longer an imagined one, it is very much real now. A clear demarcating line between the official and social historiography is essential for featuring the most pressing issues, concerning masses.

The book fails to observe this and sadly offers confrontation rather the peaceful co-existence, its well-deserved due (page 218-219):

“Kathmandu’s determination to stand up to what it calls Indian ‘bullying’ has been partially driven by the weight of a newly resurgent China behind it. And China will only become stronger hereon, and Delhi’s ability and influence within the Kathmandu establishment will continue to weaken if it does not swiftly recognise and address the foundational shortcomings in the bilateral relationship.”

Negating the actual observations of King Tribhuvan and King Mahendra on the significance of accepting the neighbourhood in its shape and spirit can’t be pragmatic at this point of time when Nepal’s ‘tryst with the democracy’ is still fogged with self-inflicted challenges like endemic corruption and lack of responsibility bearing in public life. Be it the political or economic repercussions of China’s excesses in Pakistan and Sri Lanka and letting both the countries compromising their sovereign status under guise of the ‘developmental projects’ they found no particular elaboration from Mumli. This is again very disappointing since he could have done some damage control here by commenting on China’s territorial aggression, including near the borders with Nepal.

Mulmi’s book should get a long shelf-life, in the official circle, it should be used widely for reference. His words are comforting for Nepal’s northern neighbour, the book should get translated in Mandarin for adding up to China’s existing archives of propaganda and misnomers. More than the diplomatic cables, this will give moments of fleeting happiness to the muscle-flexing policy makers in China. The political classes in Nepal will remain indifferent, this way, they will continue to avail their innocence. India will continue to be a friend, both officially and people front. Lest we forget it! (IANS)