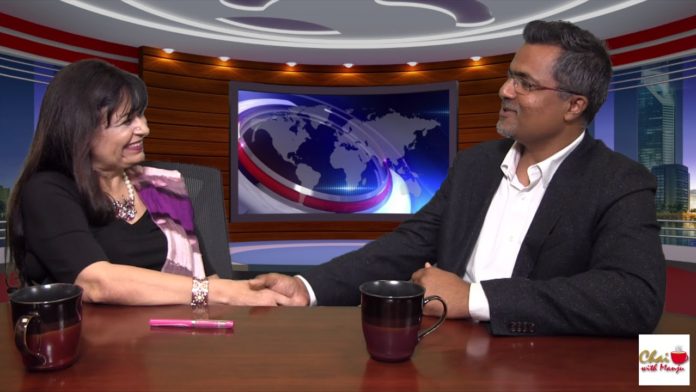 BOSTON–Founded in 2001 at the initiative of President Bill Clinton following a suggestion from the then Indian Prime Minister Atal Bihari Vajpayee, AIF has impacted the lives of 4.6 million of India’s poor. 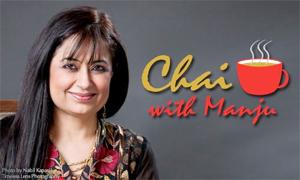 With main offices in New York and California, 12 chapters across the U.S., and its Indian operations headquartered in New Delhi, AIF is transforming lives across 24 states of India while addressing key issues such as poverty, health, education and economic and social changes.

On this occasion, Chai with Manju sat down with AIF leadership, including AIF CEO Nishant Pandey, Vice Chair Venkat Srinivasan and Boston Gala Chair Raj Sharma for an exclusive video interview on how AIF has been impacting lives in India.

To watch the full interview, please click here or on the video below.

Here are brief bios of the three AIF leaders republished from AIF website:

Dr. Venkat Srinivasan is a serial entrepreneur and was till recently Founder and CEO of RAGE Frameworks. Venkat has successfully built several knowledge-based technology businesses including eCredit, Corporate Fundamentals and recently Rage Frameworks.

Venkat has also founded EnglishHelper, KnowYourMeds and AIinGov all of which are double bottom-line enterprises leveraging AI-driven intelligent automation focused on education, health and the public sector, respectively. Venkat is an expert in knowledge-based systems architectures, artificial intelligence, computational linguistics, natural language processing, corporate finance and accounting. He has published his research extensively in prestigious academic journals and holds several patents related to flexible technology architectures and natural language processing. His book titled, The Intelligent Enterprise in the Era of Big Data was published by Wlley in 2016 and he is the author of a forthcoming book titled, The Rise of Intelligent Machines, also to be published by Wiley. He was honored with a Lifetime Achievement Award by The Indus Entrepreneurs [TiE] in 2017.

Venkat and his wife, Pratima, are active in the community. He currently serves as a Vice-Chair of the Board of AIF. Venkat is also a Trustee of BUILD and a member of the Boston Harbor Now’s Advisory Board.

Raj is Managing Director – Wealth Management and Head of The Sharma Group, a high end boutique within Merrill Lynch’s Private Banking and Investment Group and has over three decades of experience in customized investment and wealth management for entrepreneurs, corporate executives, families and institutions. Raj runs a national wealth management practice based in Boston.

For fifteen consecutive years, Raj has been recognized by Barron’s Magazine as one of America’s Top 100 Financial Advisors. In addition, Barron’s recognized Raj in their “All Stars” list – one of fifteen advisors who have appeared in Barron’s ranking of America’s Top 100 Advisors for fifteen consecutive years. He was also recognized by the Financial Times of London ranking of Global Advisors for the past four years as well as the top advisor ranking in Forbes Magazine for the past two years. Raj is also a regular contributor to local and national media on investment strategy, private wealth management and financial planning.

Raj was profiled in a book on Boston, “An Extended Family”, by Boston Globe photojournalist Bill Brett. He is a regular contributor to local and national media and his articles and interviews have appeared in publications such as The Boston Globe, Barron’s Magazine, Wall Street Journal, Financial Times, Fortune, Boston Business Journal to name a few.

Raj is an active member of the community and is involved in many local and global organizations. He is a current trustee and former Chairman of The Boston Harbor Island Alliance. Raj is a member of the Board of Trustees for Emerson College and a trustee and board member of the American India Foundation (AIF), an organization devoted to accelerating social and economic change in India. In addition, Raj is Chairman of the Board of Youth LEAD, an internationally recognized organization promoting cultural understanding and tolerance among high school students. Raj was the 2013 recipient of the “Solas Award” from the Irish International Immigrant Center for his commitment to promoting cross-cultural dialogue and for his inspirational example of achievement and civic engagement as an immigrant. In 2016, he was recognized as one of the hundred most influential people of diversity in Boston by Get Konnected, a networking organization.

Nishant Pandey is the CEO of the American India Foundation (AIF). In this capacity, Nishant provides strategic leadership to AIF’s operations spanning the US and India.

Nishant began his career as a banker but soon realised that development sector was his calling. He joined a global charity called Oxfam as the Programme Officer for South India where he designed and developed value-chain programmes on the theme of ‘power in markets’. Subsequently, he moved Oxfam’s global HQ in Oxford to lead on programme development and management in 12 countries including Russia, Tajikistan, Georgia, Azerbaijan, Armenia, Albania, Yemen, Egypt, Lebanon, Morocco and Jordon. In his work on Euro-Mediterranean Free Trade Area and its impact on small farmers in European neighbourhood, he demonstrated a rare ability to link high-level policy with community-focussed projects on the ground and was soon given the opportunity to lead the entire policy and campaigns portfolio for Oxfam in the region. Before moving back to India as AIF’s Country Director, Nishant was based in Jerusalem where he had one of the most complex and challenging assignments as Oxfam’s Country Director for the Occupied Palestinian Territory and Israel.

Nishant firmly believes in the power of win-win partnerships. In his career spanning 20 years, he has forged several multi-stakeholder initiatives involving civil society, governments and corporate partners, big and small, global and local. He believes that in the history of humanity, we have never had so much resources, connectivity and power to make a positive difference to the lives of underprivileged and marginalised women, men and children. If channelled properly through credible and collective philanthropic platforms like AIF, these attributes can make a lasting impact in the lives of ordinary people, nations and the global community at large.

Nishant speaks routinely on development issues and on corporate social responsibility. He has made several media appearances on prominent India channels like NDTV and CNN News18. Most recently, he authored an op-ed on the success of public- private partnerships in the Economic Times and participated in townhalls organized by CNN TV18 on rural healthcare. Nishant was recently invited by the Confederation of Indian Industry to speak on “Volunteerism as a Key Enabler for Nation Building” at the India@75 Summit. He was also invited to speak on “Systemic Intervention and Scope of Technology in Education” at NASSCOM Foundation’s 2017 CSR Leadership Conference.

As a British Chevening scholar, Nishant acquired his Master’s in International Development & Finance from the University of Leicester, UK. He also holds M.A. in Economics, B.A. in Anthropology and Economics as well as Advanced Management Programme from the Henley Business School, University of Reading, UK.

Nishant lives with his wife, Nupur, and son, Abeer, in New York City.